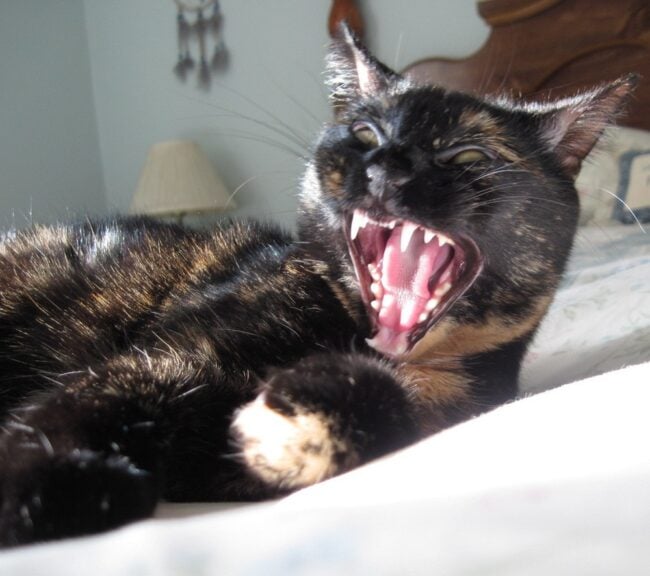 Cats are extremely sensitive to the energy around them, and, because of the deep bond between cat and human, they sometimes even take on their person’s problems. Due to the shared energy in such a close relationship, energetic imbalances are shared as well. Sensitivity to energy varies among people, but we’re all affected by it, whether we’re aware of it or not.

Have you ever felt completely drained after spending time with someone? Have you ever had an unpleasant exchange with someone, and just couldn’t seem to let go of the residual bad feelings? You’ve just encountered an energy vampire. They’re the complainers, nay-sayers, passive-aggressives, and doomsday predicters in your life. Like vampires, they feed off the life force of others around them, and they would love nothing better than to turn you into one of them. Misery loves company.

I’ve found that these energy vampires don’t just exist in real life, you can also run into them online. They’re the Facebook friends whose status updates are always filled with the latest bad news. They’re the pessimists who will counter everything positive you say with a “but.” They’re the ones who leave passive-aggressive comments on your status updates. They’re genereally people who see themselves as victims.

How do you protect yourself from these energy drainers? It helps to first understand that when you feel drained after an exchange, it’s because you’ve allowed the other person too far into your own energy field. You’ve given away your power, and you may have even taken on some of their negative energy in the process. Signs of giving up your energy to others include:

Dealing with these energy vampires can be challenging, but there are things you can do to shield yourself from the damaging effects.

If you’ve come away from one of these exchanges drained and frustrated, this brief meditation/visualization can help you rebalance your energy field:

Ultimately, you may need to make the decision to limit contact with these negative people as much as you can, or discontinue the relationship altogether.

By protetcing your own energy, you will feel lighter and more centered. And your cats will thank you, too, because it’s hard work for a cat to take on her human’s negative energy!

How do you deal with the energy vampires in your life?