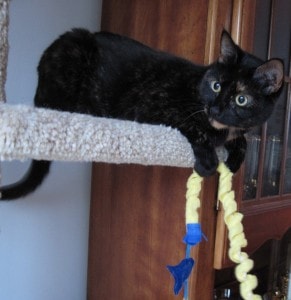 I consulted with Marilyn Krieger, the cat behaviorist who has a regular column in CatFancy magazine. Marilyn advised me on how to enrich Allegra’s environment and increase vertical space. She also introduced me to the concept of play therapy. I learned a lot from that consult, and began working with Allegra. You can read Allegra’s view of that process here.

We made some progress, but the play aggression directed at me didn’t really stop completely until I adopted Ruby a year later. Allegra blossomed after Ruby’s arrival. She loved having a playmate, and within only a couple of days of Ruby’s arrival, the two cats were chasing each other through the house and play wrestling with each other.

There was only one problem: Allegra was still a bit of a bitey girl, and she bites Ruby as part of their play. She doesn’t break skin, but she bites hard enough to make Ruby yell. The fact that Ruby is a bit of a drama queen probably makes it sound worse than it is, but it’s distressing for me every time I hear it. This is not territorial aggression or Allegra’s desire to become the dominant cat. Within seconds of “the scream,” both cats have their tails in the air and ears up (signs of a happy cat), and gleefully continue to chase each other. It’s simply a case of Allegra getting overly excited during play, and not knowing what to do with all that excess energy except bite.

I started using various Spirit Essences for a number of weeks. I had successfully used the essences to help Allegra’s fear of loud noises, which has almost completely disappeared. With the help of Siena Lee Tajri, Holistic Health Director at Spirit Essences, we picked a combination of Peacemaker and Stress Stopper, and then added Hyper Helper. In addition to using the essences, I made sure that both Allegra and Ruby had regular play sessions with me each day to help them burn off energy with something other than each other.

I saw some improvement, but not quite enough. We added Bully Remedy into the mix after Siena consulted with Jackson, and even though I had a hard time thinking of Allegra as a bully, I thought it was worth a try. I didn’t really see much change, though.

When I spoke with Jackson about his return to Animal Planet’s “My Cat From Hell” last week, he told me he’d make time for us to talk about Allegra as well. He agreed with my assessment that she is not a bully – whew! He thinks what we’re dealing with is classic play aggression, and the remedy for play aggression is: more play! But not just any play. Structured, ritualized play that mimics the cat’s hunting behavior of stalk-pounce-kill.

My challenge when playing with Allegra and Ruby together with interactive toys is that Ruby will pounce on anything that moves, while Allegra is more strategic and deliberate and likes to watch and wait first before deciding to pounce. Jackson explained that this is a personality thing: some cats are natural hunters, others are quite happy to sit back and let another cat do the hunting. But he said Allegra still needs a chance to play so she can do her own “hunting.” He suggested separate play sesssions for her, where she can be the center of my attention without distractions from Ruby. Additionally, he recommended using Training Formula before each play session to reinforce the ritualized new routine.

Jackson’s advice didn’t surprise me. I knew I wasn’t playing enough with Allegra. As with so many feline behavior problems, it usually comes back to the human. The cat is just being a cat. It is up to me as Allegra’s mom to make sure that she gets a chance to express her personality in healthy ways that make her happy. My high-energy, super-sensitive girl doesn’t know what to do with herself when she feels all this excess energy in her system, so her “release valve” is biting.  All cats are sensitive creatures in general. As Jackson put it, “how would you feel if you were so sensitive that just touching the end of your hair would set you off and you had no way to discharge that energy?”

So I’m going to make more time to play with Allegra (and Ruby, too). It’s not like that’s a hardship.

Jackson said if I do this for 7-14 days, and Allegra still bites at the end of it, he’ll personally come over so she can bite him. With his personal “bite me” guarantee, how could we not succeed?

19 Comments on Allegra Gets Advice from Jackson Galaxy