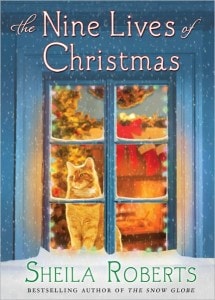 Every once in a while, I like to read a romance novel. I also enjoy reading Christmas themed books. And I really love it when there’s a cat in a Christmas romance novel, which is why I was delighted to discover The Nine Lives of Christmas.

Of course, the cover had me hooked right away. I was somewhat familiar with the author. I read Sheila Roberts’ On Strike for Christmas a few years ago. I bought that book because it, too, had a cat on the cover, and I enjoyed it, even though there wasn’t a cat in the actual story. Apparently, publishers have caught on that people will buy books with cats on the cover – or else, they just have my number.

Rest assured, there is a cat in this book.

In danger of losing his ninth and final life, Ambrose makes a desperate plea to the universe.  He’ll do anything—anything!—if he can just survive and enjoy a nice long, final life. His prayer is answered when a stranger comes along and saves him—and now it looks like he has to hold up his end of the bargain.

The stranger turns out to be a firefighter named Zach, who’s in need of some serious romantic help. If Ambrose can just bring Zach together with Merilee, the nice lady who works at Pet Palace, it’s bound to earn him a healthy ninth life.  Unfortunately for Ambrose, his mission is a lot harder than he ever thought.  Merriliee is way too shy to make the first move on a ladies man like Zach, and Zach thinks he’s all wrong for a nice girl like Merrilee.  Now it’s going to take all of Ambrose’s feline wiles—and maybe even a good old fashioned Christmas miracle—to make them both realize that what they’re looking for is right in front of their eyes.

The story is told from Ambrose’s, Zach’s and Merilee’s perspective, and, not surprisingly, I particularly enjoyed Ambrose’s sections. I also loved the suggestion that he had encountered some of the people he meets in this ninth life in some of his prior lives. You will smile and root for Ambrose as he uses all his feline powers to bring Zach and Merilee together.

While the story may be a little too predictable at times (it is, after all, a romance novel), the book is delightfully charming and a purrfect read for a lazy afternoon during the holidays.

20 Comments on Book review and giveaway: The Nine Lives of Christmas by Sheila Roberts