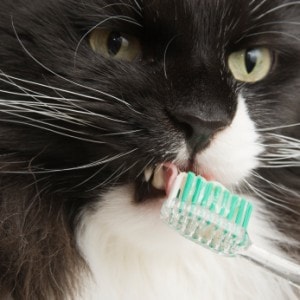 Dental disease is the most frequently diagnosed health problem in cats. Seventy to ninety percent of cats have some level of dental disease. If left untreated, it can lead to health problems for your cat, ranging from bad breath, dental pain and loose teeth to systemic illnesses that can be life-threatening.

The most effective way to prevent dental disease is to brush your cat’s teeth. Ideally, you get your cat used to this when she’s still a kitten, but even older cats can learn to accept having their teeth brushed.

All the cats who came before Allegra and Ruby had dental problems. Feebee, my first cat, needed to have his teeth cleaned once a year. Amber also needed annual dental cleanings, and for the last two years of her life, she had to have her teeth cleaned twice a year. Buckley had stomatitis, a condition in which the affected cat essentially becomes allergic to her own teeth. The outward signs of this condition are red, inflamed, and often ulcerated gums, and this can be very painful for the cat. Buckley eventually had to have all her teeth removed.

I didn’t brush Feebee’s, Amber’s or Buckley’s teeth. My excuse was that “they wouldn’t let me.” I half-heartedly tried, but didn’t persist. I used a dental water additive, but I’m not convinced that they really work: the contact of the additive with the cat’s teeth is not long enough for any effective action.

When I accidentally discovered that Ruby had some mild gingivitis at barely one year of age, I was shocked. She was on a healthy, raw diet. I thought for once, I was doing everything right. But what I wasn’t doing – yet – was brushing her teeth.

A 4-week program to get your cat used to brushing

I followed the Cornell program fairly closely. Here’s what I did with Ruby:

I purchased a kitty toothbrush and poultry flavored toothpaste. (Do not use human toothpaste for cats. It contains too many chemicals that are harmful when swallowed.) For the first few days, I just let her get used to the taste of the toothpaste. I put a small dab of it on my finger, and she liked it immediately. She thought she was getting a treat.

After a few days of this, I put a little bit of toothpaste on my finger and gently rubbed it along her teeth and gumline. Just one pass over each quadrant. The recommendation is to follow this with a treat, but since Ruby loves the toothpaste so much, I would just let her lick another little dab of it off my finger.

Now it was time to let her get used to the brush. I let her sniff it, play with it, and gently brushed it against her face for a few days in a row.

Then it was time to actually brush her teeth. She was really good about it. We’re not quite up to the full 30 seconds that are recommended as ideal, but I’m confident that eventually, we’ll work up to it.

It works in my favor that Ruby likes to sit on the bathroom vanity and watch me brush my own teeth, so it was easy to make brushing her teeth just another part of my evening routine. In fact, I keep her toothbrush and paste right next to mine.

I never thought I’d be able to brush her teeth, but all it took was a little patience. A couple of weeks later, I started the same routine with Allegra. Her gums and teeth look healthy to me (and hopefully, her vet will confirm this at her annual checkup later this month), and I want to keep them that way. Much to my surprise, she took to having her teeth brushed even quicker than Ruby.

I also started giving CET Enzymatic Oral Hygiene Chews for Cats to Ruby and Allegra.  The enzymes in these treats are supposed to reduce the build up of tartar and plaque. The ingredients are not the greatest, but they’re not horrible, either. It’s quite comical watching the girls with these treats. They’re about an inch long, so they’re pretty big – the size of a small mouse. Ruby growls at hers and plays with it for a while before eating it. Allegra usually carries hers around the house for a while before eating hers.

Dry food does not clean teeth

The myth that dry food keeps your cats’ teeth clean is one that just won’t die. If this were true, dentists would tell us to chew on hard pretzels! Most cats don’t chew their kibble long enough for any of the scraping action that is the theory behind this myth to kick in.  What little they do chew shatters into small pieces.  Some pet food manufacturers offer a “dental diet” that is made up of larger than normal sized kibble to encourage chewing, but in my years at veterinary practices, I’ve seen many cats swallow even those larger size pieces whole.  Additionally, dry food leaves a carbohydrate residue in the cat’s mouth that actually encourages growth of tartar and plaque.

You can give your cats raw chicken necks to chew on to clean their teeth. Never give cooked bones to your cat, they are brittle and can splinter and lodge in your cat’s intestines. I tried it once with Allegra and Ruby, and I found that it exceeds my comfort level. The girls were interested, but I didn’t care for them dragging the greasy bones all over the house. Allegra developed diarrhea from the rich, fatty meat that was attached to the necks. So while this may be a great solution for many cat parents, it’s just not for me.

I’m determined to make brushing Ruby and Allegra’s teeth a lifelong part of their health care. While regular home dental care may not completely eliminate the need for a professional cleaning under anesthesia, it will slow, and possibly prevent, dental problems.

Do you brush your cat’s teeth? Would you consider starting a regular dental homecare program if you knew it would reduce the need for dental cleanings under anesthesia?

34 Comments on Brushing Your Cat’s Teeth: The Most Effective Way to Prevent Dental Disease