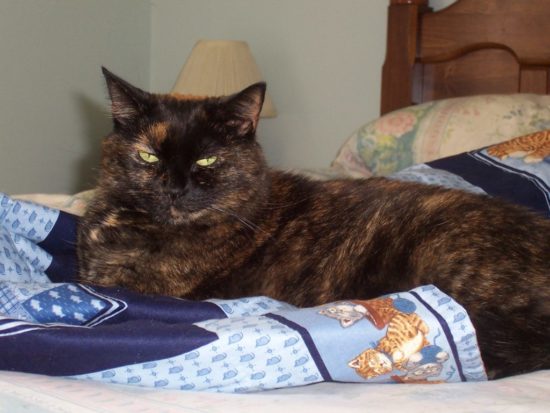 When I had to let Amber go after a brief, sudden illness last May, I wasn’t prepared for the depth of my grief. It hadn’t even been a year and a half after I lost Buckley. Here I was, faced with grieving yet again.

It’s not like I hadn’t experienced loss in my life before. Most of us who’ve reached the age I’m at have had to deal with loss. I lost my mother in 1994 after a brief illness. I lost my soul mate cat Feebee in 2000 after a valiant seven-month battle with lymphoma. I lost my office cat Virginia in 2002 after a brief decline following a fourteen-year-long life with FIV. I lost my father in 2004 to heart disease and cancer. And as those of you who’ve read Buckley’s Story know, I lost Buckley after she was diagnosed with restrictive cardiomyopathy and given a very poor prognosis that she outlived by a considerable amount of time.

I had lots of experience with grief, and I survived all of these losses more or less gracefully. I learned that there is only one way to deal with grief, and that’s to go through it. There is no way around it. You can’t run from it.  I learned about the stages of grief. I learned that you don’t go through them step by step, but rather, that you sometimes cycle through them over and over, until, at some point, mercifully, you may find that you’ve reached the final stage, acceptance. But even reaching acceptance doesn’t mean that you ever really get “over” a loss.

So you’d think that with all this personal experience in grieving, I would have been better prepared to handle losing Amber. The force of my grief over losing her caught me completely off guard. And I realized, in the middle of the shock, the tears, and the pain, that I had never lost a loved one as unexpectedly and suddenly as I lost her. Twelve short days, from the time that she was mildly ill to the time that I had to let her go. I never expected her to not get better when I agreed to hospitalize her. I always expected her to come home.  Come home she did, but not in the way I would have wanted her to. Because of her poor prognosis, after four days of intensive care, I made the agonizing decision to stop treatment, bring her home, and spend the afternoon with her before my vet came to the house that evening to help her with a peaceful transition.

As with all my losses, there were commonalities. Despite the incredible outpouring of love and support from not only my ”real life” friends, but also my online friends,  there were times when I felt alone in my grief, disconnected from the world around me and normal everyday activities. I was physically exhausted most of the time – grief takes a toll not just emotionally,  but physically. I tried to take care of myself as best as I could, by trying to eat regular meals, getting some exercise, and staying connected with friends.  But it was hard.  Going out into the world was challenging – how could life be going on when my world had changed irrevocably?

In The Healing Art of Pet Parenthood, author Nadine M. Rosin, after losing her nineteen-year-old dog Buttons, writes:  “…being out in public felt totally bizarre, as if the world had come to an end because of some horrible disaster, life as we’d known it on the planet was over, but I seemed to be the only person who knew about it.” I’ve rarely heard this particular emotion of feeling out of synch with the rest of the world expressed better. I limited social engagements to activities with friends who understood my grief, and I’m fortunate that most of the people in my life are animal people, and they do understand. I simply didn’t have it in me to make polite chit-chat with those who didn’t.

I knew I’d make it through, just like I made it through all my other losses. But one year later, I also realize that this loss left me forever changed in ways the others didn’t. And perhaps it had to do with the suddenness of the loss.

With all my other losses, I’ve always had time to prepare for loss. While anticipatory grieving is difficult, I believe that it does help in the end – you have time to get used to the idea of eventually having to go on without your loved one. But Amber was a healthy, happy cat who had rarely been sick in her life. There was nothing that could have prepared me for this.   It was much harder, much more painful, and much more complicated than my other losses. With the others, I rarely second-guessed myself. I didn’t rail at the universe for having my loved one taken from me so quickly. I didn’t blame myself for decisions I made during Amber’s last two weeks.  I just grieved.

A year later, I can finally say that I’ve found peace. And I learned this, yet again: grief is a process. It requires being gentle with yourself as you go through it. It requires allowing those who understand to support you, and staying away from those who don’t. It requires courage to face the pain, rather than run from it.

Grief can be a transformational experience.  It rips your heart wide open, and you’ll never be the same. It’s up to each individual whether they’ll choose to let grief destroy them, or whether they’ll do the challenging and difficult work that will ultimately allow it to be transformed into personal growth and expansion.

To honor Amber, her love, and all she has brought into my life, I didn’t have any other choice except to let something good come from this devastating loss.

61 Comments on Coping with Unexpected Loss: A Personal Journey