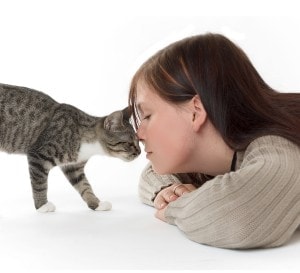 Those of us of the female persuasion who love cats probably didn’t need a scientific study to tell us that the bond between cats and humans can be very similar to the bond between humans and children.

Nor did we need researchers to tell us that cats hold some control over when and what they are fed. But if we wanted some rational ammunition to reassure our non-cat loving friends that we’re not crazy cat ladies, a new study from the Konrad Lorenz Research Station at the University of Vienna provides it.

DiscoveryNews reports that this study is the first to show in detail that the dynamics underlying cat-human relationships are nearly identical to human-only bonds, with cats sometimes even becoming a furry “child” in nurturing homes:

For the study, led by Kurt Kotrschal of the Konrad Lorenz Research Station and the University of Vienna, the researchers videotaped and later analyzed interactions between 41 cats and their owners over lengthy four-part periods. Each and every behavior of both the cat and owner was noted. Owner and cat personalities were also assessed in a separate test. For the cat assessment, the authors placed a stuffed owl toy with large glass eyes on a floor so the feline would encounter it by surprise.

The researchers determined that cats and their owners strongly influenced each other, such that they were each often controlling the other’s behaviors. Extroverted women with young, active cats enjoyed the greatest synchronicity, with cats in these relationships only having to use subtle cues, such as a single upright tail move, to signal desire for friendly contact.

While cats have plenty of male admirers, and vice versa, this study and others reveal that women tend to interact with their cats — be they male or female felines — more than men do. “In response, the cats approach female owners more frequently, and initiate contact more frequently (such as jumping on laps) than they do with male owners,” co-author Manuela Wedl of the University of Vienna told Discovery News, adding that “female owners have more intense relationships with their cats than do male owners.”

So in essence, the study shows that cats adore and manipulate women. For most of us, that’s really just another day in the lives of women who love cats, and the cats who love them.

Can you love your cat too much?

14 Comments on Women who love cats, and the cats who love them