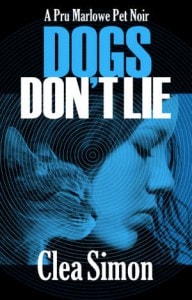 I first came to know Clea Simon as the author of The Feline Mystique – On the Mysterious Connection Between Women and Cats , and later the Theda Krakow and Dulcie Schwartz series of cat mysteries. When I first heard about the title of this first book in Clea’s new Pet Noir series featuring Pru Marlowe, I thought “oh no, Clea has gone to the dogs!” But never fear, there are still plenty of cats in this one.

Pru Marlowe has almost finished her animal behavior training in New York City when she becomes ill, and all of a sudden discovers that she can hear animals talking to her. Disturbed rather than pleased with this new psychic ability, Pru leaves the city to retreat to her childhood home in the Berkshires. Even though she hasn’t completed her behavior certification, she begins to take on some jobs training and walking dogs. One of her clients is Lily the pitbull, a former fighting dog. When Pru finds Lily’s owner murdered, his throat ripped open, and Lily standing over the body with blood on her face, it sure looks for all intents and purposes like the dog did it.

But Pru knows Lily, and she knows the dog is not a killer. So Pru sets out to prove Lily’s innocence, and she gets tangled up in an investigation that involves a business venture, an aging mother with Alzheimer’s, a pregnant fiance, an animal control officer with a pet ferret named Frank, a gay Bichon named Bitsy who tells Pru his real name is Growler, and a handsome cop.

As Pru digs deeper into the case, she realizes that the pretty little town harbors secrets that make murder look like the least of its problems. Unwilling to tell anyone about her psychic abilities, and at times questioning her own sanity, Pru realizes that if she clears Lily of the murder, she herself may be come the most logical suspect, which only increases her desire to find the real killer. Pru, who is reserved and a bit solitary by nature, doesn’t come to trust people easily. Instead, she confides in Wallis, her old, cranky, opinionated and wise tabby, who always seems to know the right time to provide a little extra guidance to Pru.  My favorite quote from Wallis is the one that probably provided the title for the book: “Dogs.” Wallis hissed out the word, as close to a curse as she comes. “They lie.”

And since one can never have too many cats in a mystery, an orange kitten named Tulip and a black Persian named Floyd also contribute bits and pieces of information to help Pru solve the puzzle. While Lily the pitbull ultimately uncovers the proof needed to convict the killer, the cats provide plenty of help along the way.

Characteristic of all of Simon’s mysteries, this new series features a fast moving, intricate plot, an immensely likable main character and well developed and multi-dimensional secondary characters. But it’s in the portrayal of the animals where Simon really shines in this book. From her sensitive portrayal of Lily’s agony, grief and sadness to her wonderful description of Wallis and her many quirks, Simon masterfully captures each animal’s unique personality. Pru’s psychic abilities add an element of surprise and delight, making Dogs Don’t Lie a treat for cat lovers, dog lovers, and mystery lovers.

Clea Simon is the author of the Dulcie Schwartz and Theda Krakow mysteries and the nonfiction The Feline Mystique – On the Mysterious Connection Between Cats and Their Women as well as several other nonfiction books.  For more information about Clea, please visit her website or her blog.

Coming next week on The Conscious Cat:
An interview with Clea Simon!