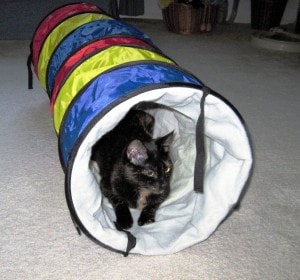 Hey everyone – I’m a big girl now!  I turned one this past Friday!  I’m not a kitten anymore!  Mom says I still act like one, but that’s okay, just because I’m a big girl now doesn’t mean I have to stop having fun!

I loved my birthday!  It was a really cool day.  I didn’t even know there was such a thing until last Friday!  Mom gave me extra cuddles in the morning (and yes, I do occasionally let her pick me up and hold me for short periods of time now), and a yummy breakfast of raw chicken.  I love my chicken.  The turkey – not so much.  I think I’ve pretty much convinced Mom to not buy that anymore.  I’m pretty smart about how I do it.  I always clean my plate when she gives me things I really love, but when it’s something I’m not so crazy about, I leave a little something for her to throw out.  I know some cats will refuse to eat something they don’t like, but I’m no dummy.  I’m not going to pass up a meal!  Anyway, back to my birthday.  After my birthday breakfast, Mom gave me a really cool present.  It’s a big, round, long tunnel thing.  It’s so much fun!  At first, I just checked it out carefully.  Then I slowly went inside.  It made crinkly noises – how fun!  Once I was comfortable that nothing was lurking inside, I ran through it at full speed.  Wee!!!  Then I thought if running through it at full speed is this much fun, what about if I took a flying leap, and then launched myself into it.  Let me tell you – it was quite a rush!  The whole thing rolled and tumbled, with me in it.  Wee!!!  I played with my new toy for most of the day.  Well, at least when I wasn’t napping, I played with it.  And Mom played with me and my tunnel, she tossed toys inside and I went in after them, that was even more fun than playing with it by myself.  And then Mom gave me a yummy rabbit birthday dinner.  It was a purrfect birthday!

I asked Mom whether I could have a birthday every day, but she said I only get to have one once a year.  Hmmm.  But then she said that there are other things we’ll celebrate, and the next thing will be something called Christmas, which she says is even more fun than birthdays.  Apparently some dude named Santa brings cats and kittens toys if they’re nice and not naughty.  Huh.  Who is this dude, and how does he know whether I’m naughty or nice?  Does Mom tell him?  I guess I better watch myself, because I love getting new toys.