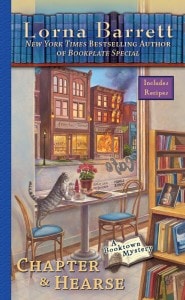 Even if I wasn’t already a fan of Lorna Barrett’s Booktown Mystery series, I would have picked this book up just based on the cover design.  I think it’s one of the prettiest covers I’ve seen in a while and it contains everything I love:   a cat, books, coffee, and a bright, cozy spot by a window to sit and enjoy all of them.  Can’t you just picture yourself there?

In Chapter and Hearse, the fourth book in the series, we return to Stoneham, New Hampshire, a small town where not much remains a secret.  We find Tricia Miles, the owner of the Haven’t Got a Clue mystery book store, at the Cookery, Stoneham’s cookbook store owned by Tricia sister Angelica, who views herself as the next celebrity chef and is hosting a launch party for her newly released first book, Easy-Does-It Cooking.   The event appears to be jinxed – not only is it lacking in guests, but a nearby gas explosion injures Angelica’s boyfriend Bob Kelly, the head of the Stoneham Chamber of Commerce, and kills the owner of the town’s history bookstore.

Tricia suspects foul play when she finds Bob being tight-lipped about the incident, and she gets drawn into investigating the murder.  As the list of suspects grows to include the victim’s mother and Angelica’s employees at her restaurant Booked for Lunch,  Tricia still seems no closer to identifying the murderer.  Then a series of strange occurrences on Angelica’s book tour have Tricia increasingly worried about her sister’s safety and raise the stakes in finding the murderer before he or she can strike again.  Filled with surprising plot twists and turns and well-developed secondary characters, including Tricia’s lovely cat Miss Marple, the story builds to a surprising ending.  I thoroughly enjoyed this book and found it very hard to put down.

Chapter and Hearse was released on August 3.  The first book, Murder Is Binding, was published in April 2008. The second book, Bookmarked for Death, was a February 2009 release, and the third, Bookplate Special, was released last October.  If you love books, cats and food, you will love this series!

You can learn more about Lorna Barrett by visiting her website.  You can also find her at her delightful blog Dazed and Confused.

Look for an interview with Lorna Barrett here on The Conscious Cat next week.  Lorna will talk to us about writing, her cats, and more!

I received an ARC of this book from the author.

10 Comments on Book Review: Chapter and Hearse by Lorna Barrett