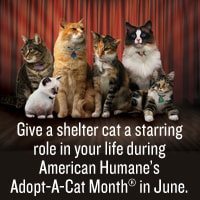 Sponsored by the American Humane Association and the CATalyst Council, Adopt-a-Cat Month is designed to help make a difference in the lives of cats.

Approximately 4 million cats end up in shelters every year, including thousands born every spring and summer during “kitten season.” Your local shelter and rescue group is brimming with cats of every breed, age and personality just waiting for a loving home. Whether you prefer young and frisky or mature and mellow, you’re sure to find the perfect cat companion during Adopt-A-Cat Month!

The Conscious Cat wants to hear your stories!  Did you adopt your cat from a shelter or rescue group?  What made you pick this particular cat over all the others at the shelter?  Or did kitty pick you?  Do you work or volunteer at a shelter?  Do you have a favorite adoption story?

Leave your story in a comment, and, if you’d like, introduce the shelter or rescue group you adopted your kitty from and leave a link in the comment so they can get some recognition, too.   At the end of the month, we’ll pick the most heart-touching story, and the winner will receive an autographed copy of Buckley’s Story.