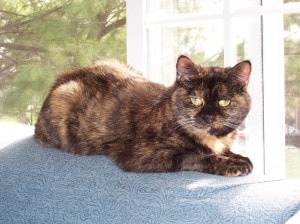 There are many stories of animals as healers. Research shows that simply petting a cat or dog can lower your blood pressure. Therapy animals who visit nursing homes and hospices bring peace and joy to patients who may not have smiled in months. There are stories of horses who help people heal emotional and psychological issues, stories about dogs who can somehow sense cancer in people, even before doctors can find it, and dogs who can tell when a person is about to have a seizure. At one time or another, all pet owners have experienced the comfort of having our pets close by when we are sick even with something minor like a cold or the flu. Research has even shown that the frequency of a cat’s purr can aid with healing of bones, tendons, ligaments, and muscles as well as provide pain relief.

I’ve met a number of these healer kitties during my years of working at veterinary clinics.  They would work their magic in various ways – by curling up next to a recovering cat or dog, by cuddling up to a worried client in the waiting room, or by comforting a staff member who had just assisted with a difficult case or a euthanasia. But none of these cats was more of a healer than Buckley, the subject of my book Buckley’s Story – Lessons from a Feline Master Teacher.

Buckley would do all of the things mentioned above while she lived at the animal hospital.  After she came home with me, she became my assistant Reiki practitioner.  Reiki is an energy therapy that originated in Japan.  As a Reiki Master Practitioner, I transfer energy to my client by placing my hands either directly on or slightly off the body.  I work with pets and with people, and I’ve found that animals, especially cats, are incredibly receptive to the Reiki energy.  Some even say cats invented Reiki.  While that may be a little far fetched, cats seem to intuitively how to utilize the energy for their greatest good.

Buckley loved being in the Reiki room while I was giving treatments, and as long as the person receiving a treatment liked cats and did not mind Buckley’s presence, she was allowed to stay. But just being in the room was usually not enough for her—she became an active participant in the healing session. She would get up on the Reiki table and often curl up next to or on top of the client. I realized after a few sessions like this that she intuitively knew where extra energy was needed, and the client would often report an added feeling of heat or pulsing in the areas where Buckley had been situated during the session. I often skipped the areas Buckley laid on during a session and concentrated on others instead. I knew my little healer kitty had it covered.

I think she also transmuted the energy in the house in general. All cats do this to some degree. Cats are sensitive to energies and have the ability to change negative energies into something peaceful and calming. Buckley seemed to be a master at this. More people commented on the peaceful energy in my house after she came to live with us than ever before.

Animals bring a spiritual component to healing as well. Buckley’s intuitive knowing during a Reiki session about where the energy was needed came from a spiritual dimension. It takes many human Reiki practitioners years of practice to achieve that level of intuitiveness.

How have the animals in your life helped you heal?  I’d love to hear your stories.

103 Comments on The Healing Power of Cats