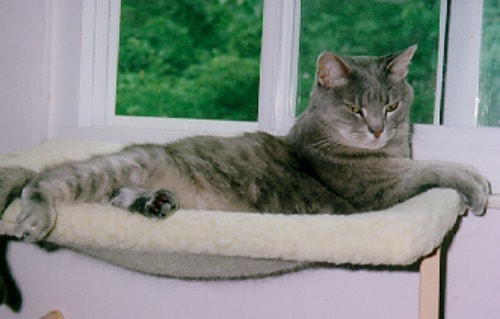 Most cat owners accept that hairballs are just a normal part of life with cats.  While the occasional, isolated hairball may be nothing to worry about, there really is no such thing as “just a hairball.”

However, more recent findings show that hairballs form because the affected cat’s intestinal motility (the movement of food content from the stomach to the intestines) is impaired, something that most commonly occurs secondary to inflammatory bowel disease, which in turn is caused in almost epidemic proportions by grain-based diets and their adverse effect on the gut flora. Gut flora is the collection of microscopic organisms that live within the intestinal system. Predominantly made up of healthy bacteria, it carries out many important functions for the cat’s health, such as the absorption of nutrients, support for the immune system, and the ability to fight disease-causing organisms.

A healthy cat with a healthy gut system should be able to eliminate hair ingested through grooming in her stool. Vomiting as a daily, or even weekly, method to eliminate hairballs is almost always an indicator that there is something else going on. Take your cat to the veterinarian for a good check up.

What can a cat owner do to eliminate hairballs?

Regular brushing or combing to get rid of loose hair before your cat ingests it certainly helps. But even more importantly, there seems to be a strong connection between diet and hairballs. More and more evidence points to a grain-free canned or raw diet as the answer to hairball problems. Cats are obligate carnivores, and their digestive systems are not designed to digest grains and carbs well.

What about diets marketed as hairball diets? These diets are high in fiber, and the theory behind them is that the fiber helps propel the hair through the digestive system. However, the opposite seems to happen in many cats, and the unnaturally high fiber levels contribute to impaired intestinal motility and actually lead to more vomiting. Since impaired intestinal motility is often a precursor to IBD (inflammatory bowel disease) and intestinal lymphoma, a grain-free diet seems to be a much better way to go.

What about hairball remedies such as Petromalt or Laxatone? These products are petroleum based, and petroleum is derived from crude oil. Does this really belong inside a cat’s stomach? Says feline veterinarian Dr. Fern Crist: “A cat is not a car.  And in no way could a cat have naturally evolved to require the dosing with ‘lubricants’ to survive or to thrive. Feeding a cat something wildly different from the diet it has evolved on is more likely to result in harm than in good.”

My own personal experience with cats and hairballs goes all the way back to Feebee, my first cat. I didn’t know any better back then, so he grew up on a vet-recommended commercial diet, and he ate mostly dry food. He coughed up hairballs at least a couple of times a week, despite frequent brushing and regular dosing with Laxatone. He also developed all the classic feline diseases now associated with dry food and foods high in carbohydrates: urinary bladder stones, and later, IBD and intestinal lymphoma, which eventually took his life at age 16 in April of 2000.

When I adopted Amber three months after he died, I transitioned her from the vet-recommended dry food with the occasional canned grocery store brand canned food that she was fed at the clinic to a quality natural, protein-based grain-free canned diet. She didn’t have a lot of problems with hairballs even prior to the diet change, but after the change, she never had a hairball again.

Buckley had a major hairball problem while she was my office cat. She, too, was being fed the standard clinic diet of dry food with occasional canned food. When I took her home, she ate the same grain-free canned food Amber ate, and her hairballs virtually disappeared.

Allegra is my first raw-fed kitty. She has never had a hairball in the year she’s been with me. She also doesn’t shed. I’ve always brushed all my cats daily, but I’ve never had a cat who doesn’t shed. She also has the shiniest coat of all of my cats. I brush Allegra every day because she likes it, but the amount of hair I pull out of the brush after each session, compressed into a ball, is smaller than the size of my thumbnail.

Are hairballs a problem for your cat?

Today is National Hairball Awareness Day, which is sponsored by Furminator, Inc., and to mark the occasion, they have generously offered a Furminator Deshedding Tool for Cats to go to one lucky reader. Come back tomorrow to enter our giveaway!

Some startling new thoughts on cats and hairballs