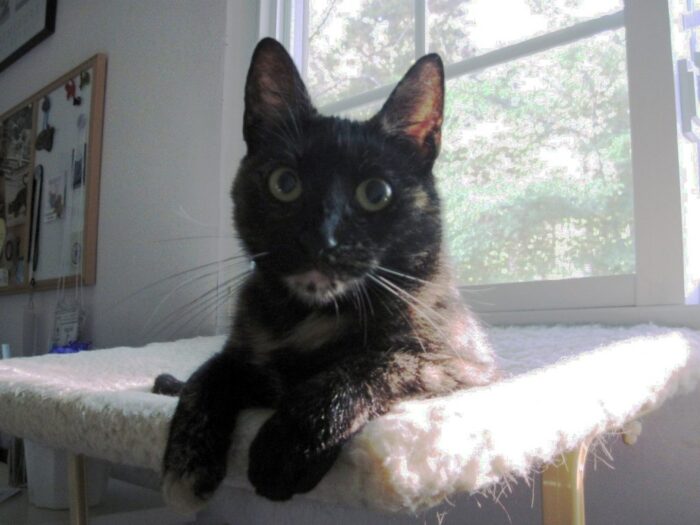 It’s about time that I get to write on here again. Just because I’m little doesn’t mean I don’t have lots to say!

You’ll be happy to hear that I’ve refined my wake up tactics. I’m quite pleased with myself! In addition to bouncing all over the bed, I’ve now added chasing my tail to my repertoire. I dance and whirl around like a feline dervish (I have no idea what a dervish is, but it sounds cool), but I can never catch it! It’s a little frustrating, but quite entertaining! And evidently, it adds to Mom’s morning pleasure, because her groans get even louder than when I just jump up and down on top of her. Sometimes, she even participates in the game by giving me a gentle kick from under the covers. I love that! It makes me slide off the bed, and I jump right back on, and for good measure, I bite Mom’s toes through the covers! Wee!!! Sometimes, I get distracted because Allegra wants to get in on the game and starts to chase me out of the bedroom, so Mom gets a few extra minutes of sleep. Suck up! I think she just does it to earn brownie points with Mom.

We had some excitement the other night. All of a sudden, there were all these weird noises coming from outside. It didn’t sound like thunder, I already know what that sounds like, and unlike Allegra, who’s afraid of storms, that doesn’t bother me at all. But this was different – kind of a popping noise, followed by some swishy sounds, and then it sounded like sssssssss, weeeeee, ppppoooowww! I had to go see what that was! I ran to all the windows and looked out, but couldn’t see anything.  Mom said it’s called fireworks, and that it was coming from some neighboring yards.  Allegra, of course, was afraid of the noises and hidden away in her safe spot behind the downstairs shower curtain. Mom gave her her magic water (Ingrid’s note: Spirit Essences Stress Stopper has worked really well for Allegra’s fears of storms and loud noises), but she still wouldn’t come out.

I’m not afraid of anything! I’m a brave kitten! Bring it on! What? What did you say, Mom? Oh. Alright. There is one thing I’m afraid of, and that’s the monster Mom brings out once a week. She says it’s called a vacuum cleaner, but that’s far too kind a word for something that roars and eats small things that are on the floor. I mean, what if it eats me? I’m small! Oddly, Allegra isn’t afraid of the monster at all, she just sits a few feet away and watches Mom push it all through the house. I don’t get it. Maybe it’s because she’s bigger than me, and the monster can’t eat her. Thankfully, I found a place where the monster can’t get me: right on the very top of our big cat tree in the living room. I can keep an eye on things from up there, and keep a safe distance. So far, the monster hasn’t figured out how to climb.

And just so you can see what I have to put up with, here’s a video of me taking a leisurely bath (aren’t I just too cute!). And then – well, you’ll have to watch to see what happened!