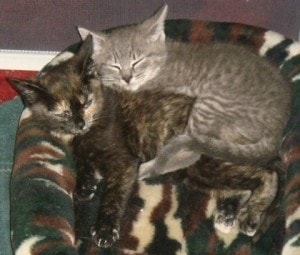 If you’ve read The Conscious Cat for a little while, you may remember reading about Steeler. Steeler was a tortie who belonged to my friend Bernie. Steeler had come into Bernie’s life during a time when she really needed a little angel. Her husband had become severely debilitated by Alzheimer’s, and after Bernie took in the the little stray cat sporting the colors of her favorite football team, she quickly won both of their hearts. Miraculously, Bernie’s husband, who didn’t respond to anyone else at that stage, not even to Bernie, still responded to Steeler’s presence.

After her husband was hospitalized, Steeler became a great comfort to Bernie. Sadly, fate wasn’t done providing challenges for Bernie. Bernie’s husband succumbed to his illness last December. A few weeks later, Bernie’s son Eric lost his battle with lung cancer. And four months after that, Steeler passed away after dealing with multiple health issues.

It takes a strong person to go on after so much loss in such a short period of time. Continue Reading 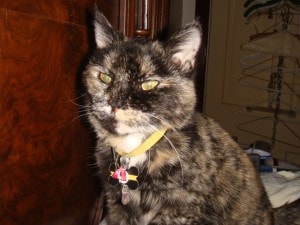 When a friend loses a cat, my heart aches for my friend. Today, the world lost a very special tortie named Steeler.

I never met Steeler. She belonged to my friend Bernie, but she also “belonged” to a group of friends who met via one of my blog posts about Tortitude: The Unique Personality of Tortoiseshell Cats.  Bernie found the post when she did a  Google search after Steeler first arrived on her door step, because, as she said “I was curious to see what kind of a cat I had taken in. She just looked so exotic to me.”

Bernie found the abandoned tortoiseshell cat crying at her backdoor one night. She had never had a cat before, and knew nothing about cats. The little cat wanted in. Bernie did not want a cat. When it became colder, and no shelter would take her, Bernie decided that any cat that wanted a home that badly could stay.Continue Reading