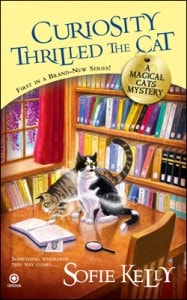 Curiosity Thrilled the Cat is the first in the brand new Magical Cats Mysteries series. Even if I didn’t already love cat-themed mysteries, the cover would have drawn me in for sure: cats and books, my two favorite things!

When librarian Kathleen Paulson moved to Mayville Heights, Minnesota, she had no idea that two strays would nuzzle their way into her life. Owen is a tabby with a catnip addiction and Hercules is a stocky tuxedo cat who shares Kathleen’s fondness for Barry Manilow. But beyond all the fur and purrs, there’s something more to these felines.

When murder interrupts Mayville’s Wild Rose Music Festival, Kathleen finds herself the prime suspect. More stunning is her realization that Owen and Hercules are magical-and she’s relying on their skills to solve a purr-fect murder.

I loved everything about this book. The character of Kathleen, a determined amateur sleuth whose boyfriend in Boston went on vacation and returned home married, which prompted her move to Minnesota, is extremely likeable. The small Minnesota town she moves to is home to a cast of enjoyable secondary characters ranging from interesting to slightly bizarre. But it’s the cats who steal the show in this mystery. Owen is addicted to his Fred the Funky Chicken catnip toys, and Hercules is a fan of Barry Manilow’s music, which is definitely one of the more unique character traits I’ve seen in a cat!

I prefer if cats don’t talk in cat-themed mysteries, and these two don’t, but they do help solve the mystery, and at times, overshadow the human characters. I had no problem with that! But what really endeared me to Owen and Hercules is the fact that they seem to have magical powers: they can appear and disappear at will. Okay, so far, nothing that your average pet cat can’t do, right? But Owen and Hercules appear to be able to walk through walls and other solid surfaces.

The murder mystery gets solved, with a lot of help from the cats, but the magical properties of the two cats are left up in the air. Some readers may be bothered by this, but I actually liked it – it makes me look forward to the next book in the series even more.

Curiosity Thrilled the Cat is a whimsical, funny, magical read for cat and mystery lovers.

Sofie Kelly is the pseudonym of young adult writer and mixed-media artist, Darlene Ryan. Sofie/Darlene lives on the east coast with her husband and daughter. In her spare time she practices Wu style tai chi and likes to prowl around thrift stores. And she admits to having a small crush on Matt Lauer. You can learn more about her on her website.