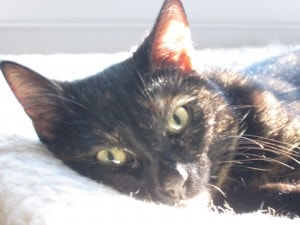 I’m learning lots of interesting things about this thing Mom calls weather! The last time I wrote on here, I told you about all that white stuff that was falling from the sky, and how I didn’t like it at all. I also don’t like days when my sunny spots don’t appear (and I still don’t get why Mom can’t just make them appear, she can do so many other amazing things!). But last week, we had a really cool thing happen: sunny spots, and open windows! It was so warm, Mom left the windows open all day, and I could sit on my perches and sniff the breeze. It was so nice!

I could also tell that Mom was really happy when it got warm. Like mother, like daughter, I guess – she loves sunny spots, and she doesn’t like the white stuff, either. She said the white stuff is called snow, but I’ve heard her use some other words when she talks about it that she says aren’t fit to mention here on my blog. Oops, I mean Mom’s blog.

We got some more of the white stuff the other day – not a lot, but enough to make Mom mad because it messed up one of her book signings. It also messed with my kitten head again, because I’d already forgotten that it changes how everything looks when I look outside, and it scared me a little bit when I woke up and saw that things were white again outside.

Mom said soon it will be warm all the time, and we can have the windows open a lot. She says it’s called spring. I like spring – not just because it’s warm, but because it was spring a year ago when I came to live with Mom!

The other thing that happened since I last wrote was that Mom went away again. This time, I knew it wasn’t good when the black box came out. Yup, Mom left me again. She went to a Pet Writing Conference. I think she should have taken me with her. I am a pet writer, aren’t I? I’m a pet, and I write! At least this time, it was only for one night, and I had plenty of company; both Ronnie and Renee came to visit a couple of times, and, more importantly, to feed me! And this time, I knew that just because Mom went away, it didn’t mean it was going to be forever. I’m a big girl now, and I’m not as afraid of being abandoned as I was when I was little.

That’s all my news. Now I’m going to see if I can entice Mom to play with me and my current favorite toy, the Neko Flies. You can see me play with it here: 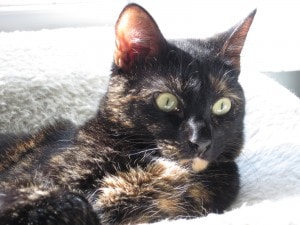 We’ve had some excitement around here since I last wrote!  I was just going about my business yesterday when all of a sudden, there was this loud noise against the windows, roof, and side of the house.  I know what heavy rain sounds like, and I don’t like it at all, but this was worse!  Mom said it was sleet, she said it’s what happens when it gets so cold that the rain freezes.  I don’t know what freezing is, but I do know that that noise scared me, and I hid under the sofa.  As if that wasn’t enough, there was thunder, too!

But that wasn’t all.  When I finally came out from under the sofa and looked out the window, there was white stuff falling from the sky!  A lot of it.  Mom said it’s called snow.  I watched it fall, and everything outside changed really fast.  All I could see was white!   Lots of big white flaky things swirling around!   I tried to catch them, but my paw kept bumping against the window, so after a while, it stopped being fun.

And then, all of a sudden, just after I had finished my dinner, our whole house went dark, and very very quiet.  It was really strange.  This was a different kind of dark from how it gets dark when Mom and I go to bed.  Mom brought out a flashlight.  Oh, it was a new game!  I love flashlights!  I love chasing the dot of light!  Wee!!!  But she didn’t seem in a mood to play with me at all.  I didn’t understand, and chased the flashlight dot anyway, but it wasn’t as much fun because Mom wasn’t having fun.

Mom said that we lost our power.  I don’t know what this power is, but it seemed to upset Mom that it was gone.  She said there was nothing else to do but go to bed.  Silly Mom.  It was too early to go to bed!  I went back into the living room to look out the big window.  It was getting whiter and whiter out there.  All of a sudden, there was a really loud crack that sent me running for cover.  It got Mom out of bed, too.  I was wondering whether she would come hide under the sofa with me, but after she looked out the window, she said it was just a pine branch that broke off the tree outside.  She said I shouldn’t worry, we were purrfectly safe inside.  I decided to stay under the sofa just a big longer anyway.  Just to make sure.

Meanwhile, the house was getting colder and colder, and I went to join Mom in bed.  I figured she was probably cold, too, and maybe I could help warm her up a little.  I know she loves when I sleep right next to her, so I snuggled up with her.

A few hours later, Mom and I woke up to the sound of the heat coming on.  I felt Mom relax, and we both went back to sleep.  Then a horrible scraping noise outside woke me up – it sounded like the big scary trucks that come by our house a lot, only a hundred times worse!  Mom said it was a snow plow, and that it was moving some of the white stuff out of the way, and that I didn’t need to be afraid, but I wasn’t having any of it and I hid under the bed for a while.

Eventually, I jumped back on the bed to be with Mom.  When it started getting light out, we got up, and everything looked different!  So much white!  It almost hurt my eyes, it was so bright.  Mom said she had to go outside and shovel so that she could go away in her car.  I don’t like when she goes away in her car, so I told her she should just stay inside with me, but she went outside anyway.  When she came back inside, she was really tired, and mumbled something about being so over winter.  I don’t know what that means, but I was glad she was back inside with me. 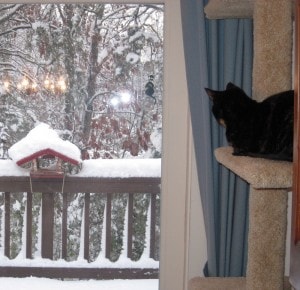 But the best part of this white stuff so far has been that there are way more birds at our birdfeeder than ever before.  I’m having so much fun watching them!  I wish I could figure out how to catch them!  But that would mean I’d have to go outside, and I’m too smart for that.  I know that I’m a lucky kitty because I don’t have to be out in the snow and cold like those birds.

So that’s what was happening at my house.  Did any of you get that white stuff at your house, too? 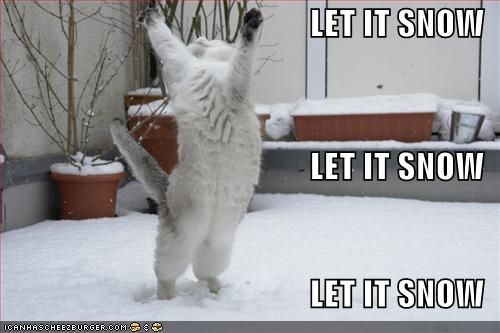 Do you enjoy winter and love to play in the snow, or would you rather curl up in front of a warm fireplace with your favorite feline?  Regardless of your preferences for this cold season, being aware of the challenges this time of year can bring for your pets can help keep them safe all winter long.

1. Keep your cat inside. Outdoors, felines can freeze, become lost or be stolen, injured or killed. Cats who are allowed to stray are exposed to infectious diseases, including rabies, from other cats, dogs and wildlife.

2.  During the winter, outdoor cats sometimes sleep under the hoods of cars. When the motor is started, the cat can be injured or killed by the fan belt. If there are outdoor cats in your area, bang loudly on the car hood before starting the engine to give the cat a chance to escape.

3. Never let your dog off the leash on snow or ice, especially during a snowstorm – dogs can lose their scent and easily become lost. More dogs are lost during the winter than during any other season, so make sure yours always wears ID tags.

4. Thoroughly wipe off your dog’s legs and stomach when he comes in out of the sleet, snow or ice. He can ingest salt, antifreeze or other potentially dangerous chemicals while licking his paws, and his paw pads may also bleed from snow or encrusted ice.

5. Never shave your dog down to the skin in winter, as a longer coat will provide more warmth. When you bathe your dog in the colder months, be sure to completely dry him before taking him out for a walk. Own a short-haired breed? Consider getting him a coat or sweater with a high collar or turtleneck with coverage from the base of the tail to the belly. For many dogs, this is regulation winter wear.

6. Never leave your dog or cat alone in a car during cold weather. A car can act as a refrigerator in the winter, holding in the cold and causing the animal to freeze to death.

7. Puppies do not tolerate the cold as well as adult dogs, and may be difficult to housebreak during the winter. If your puppy appears to be sensitive to the weather, you may opt to paper-train him inside. If your dog is sensitive to the cold due to age, illness or breed type, take him outdoors only to relieve himself.

8.  Does your dog spend a lot of time engaged in outdoor activities? Increase his supply of food, particularly protein, to keep him in tip-top shape.

9. Like coolant, antifreeze is a lethal poison for dogs and cats. Be sure to thoroughly clean up any spills from your vehicle, and consider using products that contain propylene glycol rather than ethylene glycol. Visit the ASPCA Poison Control Center for more information.