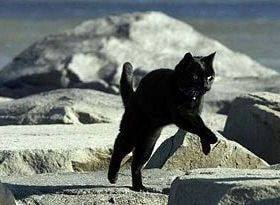 We’ve all heard of dogs who love to run with their owners. We’ve also heard of some cat owners who train their cats to walk on a leash – walk being the operative word. But a cat who runs with her owner? Now that’s unusual!

Michael Greenblatt is a fitness trainer who trains high profile athletes and celebrities. He lives in West Long Branch, NJ.  One day, three years ago, he went on his morning run like he does every other morning. But that day was going to be different, and little did Michael know at the time how the encounter with the little black kitten would change his life. He noticed the small black cat with the golden eyes sitting on a hill across the street from his house. She reminded him of his black childhood cat Nubbs.

Michael had been a runner for many years, and he was used to cats taking off at the sound of his feet. Not this little kitten. She would just sit and stare at him as he ran by. After about three weeks, he asked the woman who had clearly been feeding the kitten whether she belonged to someone. The woman told him that she was just feeding her, and that he could take the kitten if he wanted her. A few moments later, the kitten came up to Michael and rubbed up against his legs. It was as if she’d understood what he was asking.

The following morning, when Michael went for his run, an amazing thing happened. The kitten was waiting for him in the usual spot, but unlike all the other times, when she just watched Michael run past, that day, she started running with Michael! She ran all the way down the block with him, but thankfully, she stopped when traffic increased. When he returned, the kitten came charging down the streeet to greet him, and accompanied him on his cool down walk back to his house.

After three weeks of this, Michael decided that this kitten was going to be his. He named her Roadrunner – as if there really was another choice for a name!

He has been training Roadrunner for almost two years now. She runs on the sidewalk to the end of Michael’s cul-de-sac, and back. She particularly enjoys running on the Long Branch beach. Running up and down the jetty is one of her favorite tricks. Not surprisingly, she stretches before and after her runs.

When Roadrunner is not running, she likes to “help” Michael when he’s on his laptop computer. That help involves head butting, and biting and swiping at his fingers so he can’t type. She also likes to sit on his cell phone so he can’t find it. At night, she likes to sleep on his stomach with her head on his chest and her paws around his neck.

Allegra and Ruby watched this video with great interest, but they’ve both decided that the only running they’ll do will be when they chase each other through the house.