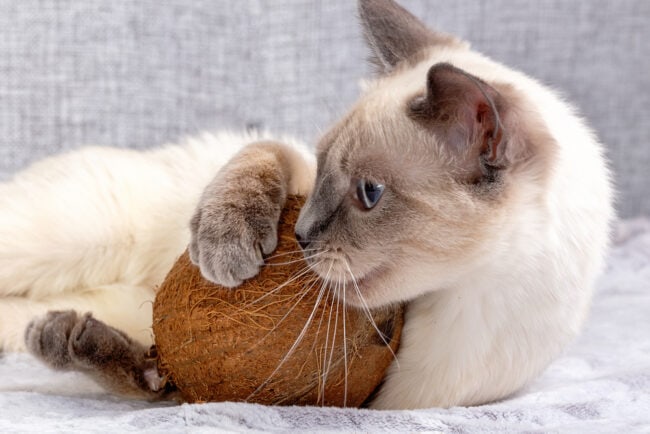 Coconut oil has been big in human nutrition for quite some time. Widely marketed as a superfood, the unique combination of fatty acids in coconut oil may have anti-inflammatory and anti-bacterial properties and boost the immune system. I’ve been getting a lot of questions about whether these benefits apply to cats as well. Continue Reading 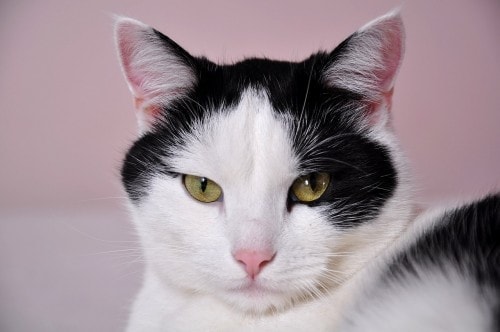 Cats, like humans, require both omega-3 and omega-6 fatty acids for optimal health. Both are considered essential fatty acids, meaning they cannot be manufactured in the body and therefore need to be obtained through diet.

I’m a big believer in supplements for both cats and humans. You should see my kitchen counter: between my supplements (I didn’t earn the name “supplement queen” from my friends for no reason!) and Allegra and Ruby’s supplements, there’s not much space left for anything else. And I’m only half kidding.

I rarely accept supplements or food for review unless it’s something I’ve already thoroughly researched and/or tried. I won’t use Allegra and Ruby as product testers for products whose claims I can’t verify. Full disclosure: I have not used Pet Naturals of Vermont’s products, but based on what I’ve read about the company, and the ingredients listed for their products, these look like good products to me. I was particularly impressed to find out that Dr. Roger Kendall, Pet Naturals® vice president of research and development, and Dale Metz, Pet Naturals® CEO, are founding members of the National Animal Supplements Council. The NASC seal guarantees that pet supplements meet guidelines for quality, integrity and truth in labeling.Continue Reading 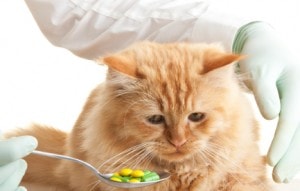 How many times have you seen the words “complete and balanced” on a pet food label? Would this lead you to believe that the food baring this claim is all your cat will ever need to be in perfect health? If so, you may be wrong.

The claim of “complete and balanced” simply means that the pet food company making that claim for any particular food is stating that when a sample of that particular product was subjected to a chemical analysis, that sample was found to contain the currently “known to be essential” nutrients at the currently recommended levels according to the currently accepted provisions laid down by AAFCO. (Source: Dr. Billinghurst’s BARF Diet).

Sounds like a mouthful? What it means in plain English is that commercial pet food contains every nutrient that our pets require. It does not necessarily mean that it also contains all the nutrients our pets need to be in perfect, healthy balance.

I think the concept that a cat can thrive on the same food, day after day, no matter how high a quality, simply doesn’t make sense. Continue Reading 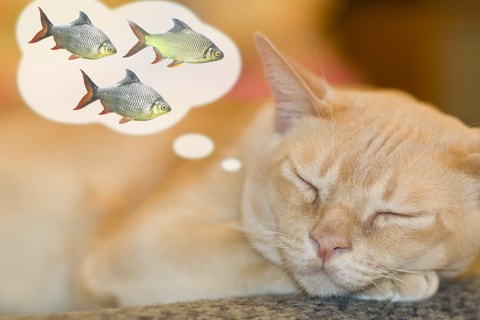 If your cat loves fish, he has lots of company! However, it’s really not a good idea to feed fish to your cat, and here’s why.

The primary fish used in cat food are salmon, tuna, and tilefish (ocean whitefish). Let’s look at each of these.

The vast majority of salmon today comes from farm-raised fish. In this form of factory farming, millions of these unfortunate animals are kept in huge, overcrowded pens in polluted coastal waters. They’re fed antifungals and antibiotics to limit the spread of disease, and dyes to make their flesh salmon-colored (otherwise it would be gray). Common water pollutants, such as PCBs, pesticides, and other chemicals, are found in farmed salmon at ten times the amount found in wild fish. These contaminants will be present in any product made with farmed fish, including pet food.

It has recently been revealed that krill, tiny shrimp that are the natural diet of many whales and other marine animals, are being netted in vast hauls, and processed into food for these “franken-salmon,” for their protein as well as their red color. The issues with krill are explained below.

It’s the fish that’s most “addictive” to cats. They love it so much that they may stage a hunger strike by refusing their regular food until they get it!

Tuna and other predatory fish are at the top of the food chain. This means that they may accumulate high levels of heavy metals (including mercury) as well as PCBs, pesticides, and other toxins, by eating smaller fish. The older the fish, the more contamination. The FDA recommends only one serving of albacore tuna per week due to its high mercury levels.

are among the worst contaminated fish, along with king mackerel, shark, and swordfish. These fish are so toxic that the FDA advises women of child-bearing age and children to avoid them entirely.

The fish used in canned pet foods is typically whole fish, or leftovers from processing whole fish, deemed unsuitable for human consumption; this includes guts, feces, and bones, which are high in phosphorus—a problem for cats with kidney disease. On the other end of the urinary tract, many sensitive cats develop cystitis (bladder inflammation) and even urinary blockages if they eat any kind of fish at all. Fish and fish meal are both problematic.

A small amount of fish, such as wild caught sardines, used as a flavoring in a properly balanced, fresh meat-based diet, is not a problem, but fish should not be the main course for the cat’s diet.

What about Omega-3 fatty acids?

Aren’t fish and fish oils the best sources of these essential fats for our pets? Indeed, daily Omega- 3 supplementation from a marine source is extremely important for our cats as well as for us. Among many other benefits, Omega 3s fight inflammation, which affects our cats as much as it does us.

Krill is a popular non-fish source for Omega-3 oil. Krill are the major food source for many marine animals, including fish, whales, seals, and birds. Yes, there are a lot of krill in the sea, but the problem is that they are being harvested near critical feeding grounds of the animals that eat them. When even Whole Foods stops selling krill oil, as they did in 2010 due to concerns about sustainability, you know there’s a problem!

Cats do benefit greatly from an Omega-3 marine lipid supplement every day, but as we have seen, fish and krill oils are not the most environmentally friendly choices. Nor are they necessarily healthful. Many fish oils are processed by boiling the oil to separate it from heavy metals and toxins (distillation). Fish oil processing may also include the use of, alcohol, salts, solvents, and deodorizers to disguise the foul smell of the oil—a problem because fish decompose very quickly, turning the oil rancid before it can even be processed.

Additionally, as energy medicine practitioners, quantum physicians, and homeopaths know, the original energetic essence or “memory” of those heavy metals and pollutants, remains “imprinted” in the greasy substance that remains. The Omega 3s that survive, EPA and DHA, may be artificially concentrated in the process. It may be fair to say that the higher milligram values listed on fish oil labels are not necessarily better, as this is not the way they occur in their raw, natural state.

We need an alternative source of marine lipids for all these reasons, as well as the cautions mentioned for the eating of these fish.

Research suggests that the New Zealand greenlip mussel (perna canaliculus) is our best choice for Omega 3’s. These greenlip mussels (GLM) are raised 100% sustainably. They are very low on the food chain; and have no fins, feet, or faces. GLM are bi-valve mollusks known to be a rich source of 33 fatty acids; 18 of them Omega 3s. GLM contain a unique array of Omega 3s. One of the most fascinating is ETA (eicosatetraenoic acid). ETA, which is not found in any other foods to any measurable degree, has extremely powerful ant-inflammatory properties.

The best scenario is to source a greenlip mussel oil that is organic, cold-extracted, and certified to be free of mercury and other toxins and pollutants. Ideally, choose a GLM marine lipid product which also contains antioxidants with high ORAC values (a measure of antioxidant power), such as cold-pressed, organic grape seed husk extract and/or kiwifruit seed oil—these will naturally deactivate free radicals, as well as serve as natural preservatives for the GLM oil.

While it doesn’t affect quality, a common complaint about fish oil capsules is their size. They are enormous! GLM oil comes in tiny capsules that are perfect for cats, who will often eat them right from your hand; or they can be punctured and the contents mixed with wet food.

Sources for quality Omega 3 greenlip mussel oil supplements are available online, and are proving to be the most beneficial and ecologically sound alternative to fish and krill oil.

Celeste Yarnall, Ph.D was an author, lecturer and holistic practitioner and author of four books, including The Complete Guide to Holistic Cat Care, co-authored by Jean Hofve, DVM.

This article was previously published on care.com and was republished with the author’s permission.