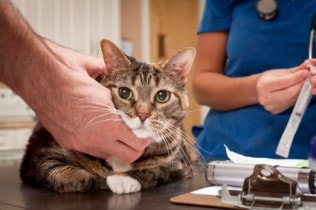 Advances in veterinary medicine make it possible to diagnose and treat medical conditions in cats that would have been a death sentence a decade ago. From chemotherapy to kidney transplants, MRI’s to radiation therapy, ICU care to chemotherapy, cats can now receive the same level of medical care as humans. Cutting-edge veterinary care by board-certified specialists ranging from internists to oncologists to ophtamologists is becoming more widely available than ever before.

Dr. Julie Smith is the Medical Director at AnimalScan Advanced Veterinary Imaging center just outside of Washington, DC. Magnetic Resonance Imaging (MRI) facilities is one of the most powerful and accurate diagnostic techniques available today,Continue Reading 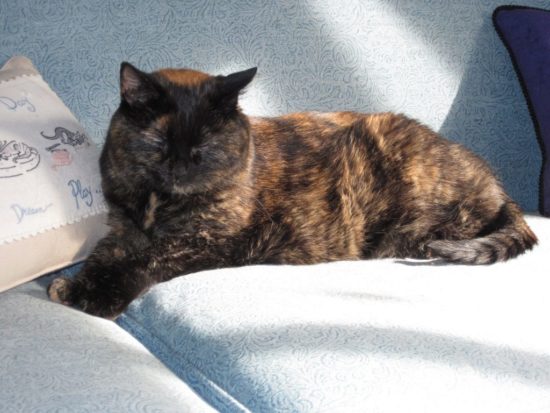 This past week of tributes to Amber, and all the love, support, kind words and cyber hugs you’ve offered through your comments and notes, have provided great comfort for me during this difficult time.  Thank you, all of you, from the bottom of my heart.

Throughout this past week, I’ve been getting a lot of questions about exactly what happened to Amber.  Even though it’s difficult to write about it, I’m hoping that by sharing the sequence of events of her disease process, I may help other cats who may present with the same, or similar symptoms.  I am not a vet, and I’m writing this from my vantage point of being Amber’s mom – a mom who is still grieving.  Dr. Fern Crist has promised me an article on the calici virus which we think caused Amber’s illness.  It will run here on The Conscious Cat in the next few days, again, in hopes that it may raise awareness about this virus.

I’ve also gotten a lot of questions about whether I need to worry about Allegra getting sick, too.  While there are, of course, no guarantees, the answer is almost definitely no.  The most likely scenario is that Allegra might actually have been the carrier of the virus – chances are that she had a mild form of the disease when she was younger (her medical history is a bit sketchy, and she was also over-vaccinated, so who knows), got over it, and is now immune, but was or is still shedding the virus.

On Sunday, May 2, Amber was stilll fine.  She was starting to get to know her new little sister, who, at that point, had been with us for almost a month.  She had a full breakfast, and spent the day doing all her normal, happy Amber things – napping in the sunny spots, looking out the window, cuddling with me while I was reading.  When I offered her dinner that evening, she didn’t seem very hungry, but ate about half of her meal.  Later that evening, I noticed her making some gagging noises – as if something was stuck in her throat perhaps.  She was breathing fine, and she even purred for me, so I thought maybe some hair had gotten lodged in her trachea, and that she was eventually going to be able to clear it herself.  We went to bed that night, with Amber curled up in my arms, as she had been almost every night since she came to live with me on July 29, 2000.

Unfortunately, the gagging didn’t stop overnight.  She ate a few bites of her breakfast Monday morning, and then went to one of her favorite napping spots for her morning nap.  I called Fern to run these odd symptoms by her, and we both agreed that I would just continue to keep an eye on Amber.  If things got worse, Fern would come and take a look at her.  Things didn’t change much throughout the day, but the gagging got progressively worse throughout the night (why is it that anytime a pet gets sick, things always get worse overnight?).  I didn’t want to take her to the emergency vet.  I knew that her situation wasn’t life threatening, but I also knew that she was very uncomfortable.  To compound things, she also vomited a couple of times overnight.  By Tuesday morning, it became clear that she needed to be seen by a vet.  After examining her, running bloodwork and taking a series of x-rays, we still weren’t any closer to diagnosis.  Fern was hearing high-pitched sounds in the back of her throat, like her airway was constricted or partially blocked.  She also thought she saw some redness and swelling at the back of her throat, but without getting a closer look, there was no telling what was going on.  And in order to take a closer look, Amber needed to be sedated.  There’s always a risk with sedation, but the bigger risk seemed to be to not know what was going on, so I agreed.  The good news was that the exam revealed no tumors or foreign bodies, but her larynx was severely swollen, making it tough for her to breathe.  The treatment would require steroids and supportive fluids.  Normally, I’m not a fan of using steroids because of their longterm side effects, but in this case, something was needed to knock the inflammation down and make Amber more comfortable quickly, so again, I agreed.  Thankfully, I’m able to give injections and fluids myself, so she could come home with me.

She seemed to be feeling better on Wednesday, and I started breathing a bit easier.  Meanwhile, Fern had done some research on this odd presentation of symptoms, and thought this might be a variant of a particularly nasty strain of calici virus making its way through the cat community.  This calici virus was appearing in other cats that had similar symptoms:  laryngitis, followed by inflammation and swelling in other parts of the body, including pancreatitis.  The way to treat a virus like this is with supportive care.  We thought we were on the right track, and the virus just needed to run its course and work its way out of Amber’s system.

By Friday, she wasn’t any better.  Fern stopped by my house to take another look at her, and still didn’t see anything that would lead her to think that it was anything other than a virus.  We decided to see how Amber would do through the weekend with continued supportive care.

She had a quiet weekend, but she was clearly uncomfortable.  Every afternoon, she’d rally and have a brief period of renewed energy, which gave me hope that things were starting to turn around.  She’d walk around a bit, jump up on the back of the loveseat and look out the window, and then go back to resting comfortably on her favorite sunny spot on the sofa.

However, by Monday morning, it was clear that not only was she not getting better, she was getting worse.  That’s when we took her to the internal medicine department at the Hope Center for Advanced Veterinary Medicine.  Ultrasound and other examinations revealed that she had fluid in her chest and abdomen.  An echocardiogram showed that she was in congestive heart failure – an underlying heart condition we were not aware of complicated matters, and the steroids and fluids she had been given had pushed her heart too far.  She spent the next three and a half days in intensive care.  She was given intravenous fluids, concentrated nutrition through a nasogastric feeding tube, and antibiotics for a complicating bacterial infection.  Thankfully, I was able to visit her twice a day.  It was hard to see her so sick, but she responded to me each and every time I came to visit, and she even purred for me at times.   I tried to cling to the hope that she was going to get better.

Ultimately, the challenge of needing to treat her with aggressive fluid therapy without pushing her heart too far proved to be too much.  On Thursday morning, after she seemingly had a good night, she took a turn for the worse, and while there was more that could have been done, her prognosis was so poor that I decided to stop treatment and take her home.   Her wonderful doctor at the Hope Center agreed that this was the right decision.

Amber and I spent the next few hours together, just soaking up every last little bit of togetherness that we could.  For most of that time, she was curled up in my arms, in our favorite spot.  Fern would come later in the afternoon to help her make the final transition.

I was still having a hard time with my decision.  I knew the decision to stop treatment was the right one, given the circumstances.  I wasn’t so sure about my decision to euthanize that afternoon.  Perhaps there was still a chance she would get better on her own?  Miracles have been known to happen.  Maybe I could have one more night with her?  Fern told me that if I waited too long, fluid would continue to accummulate in her chest, and she’d die miserably, would, in effect, be drowning in her own fluids.  Of course I could not let that happen.  But Amber seemed so happy to be home, and she seemed comfortable.  She just didn’t seem that sick!  She walked around the house, as if reclaiming her space again, then settled on her favorite spot on the loveseat.  She seemed content.  She even purred for me!  When I went into the kitchen a little while after she came  home to open a can of food for Allegra, Amber jumped off the loveseat and walked into the kitchen, tail held high in the air.  I coudn’t believe my eyes.  I offered her some food, and she even sniffed at it, but then turned away from the dish.  Still, the fact that she was interested enough to come into the kitchen….  it seemed like a glimmer of hope.  A little bit later, a friend came over to say good bye.  She brought flowers for me.  I laid the flowers on the coffee table while my friend talked to Amber.  Amber jumped off the loveseat, then up on the coffee table, to inspect the flowers.  My friend and I were speechless.  How could she show this burst of energy when she was supposedly so sick?  Seeing her so interested in what was going on around her made it really difficult to believe that her body was being ravaged from the inside and that I needed to let her go.

However, as the afternoon progressed, her breathing became a little more labored.  She was still comfortable, though.  She climbed into my lap, and curled up for another nap.  She purred some more.  And yet, her breathing continued to worsen.  At around three o’ clock, I called Fern and asked her to come in a couple of hours.  Only two more hours left together.  My heart was breaking, and yet, at that point, I knew I had no choice.

I will always treasure those last two hours.  Gradually, I began to feel more at peace.  I got a sense from Amber that she, too, was at peace.  When Fern arrived, Amber was lying on my chest, sleeping lightly, and occasionally lifting her head to look into my eyes.  Since she still had her catheter from the hospital, we didn’t even need to disturb her.  Fern gave her the final injection, and Amber passed peacefully, looking into my eyes until the last moment.