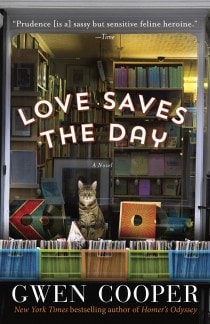 Gwen Cooper’s Love Saves the Day is one of the most touching cat books I’ve ever come across. This hauntingly beautiful story about how one small cat can change multiple lives is narrated primarily by Prudence, a brown tabby rescued from a deserted construction site on Manhattan’s Lower East Side. Prudence is a keen observer of humans and knows them better than they know themselves at times.

This sweeping novel, with Prudence at the center, covers the music scene of the 1970s in Lower Manhattan, the issue of what happens to pets whose guardians die, the real life event of a building on the Lower East Side that was demolished in 1998 and plays a pivotal role in the story, and a complicated mother daughter relationship that crosses several decades. Cooper weaves all  of these threads into a beautiful, cohesive whole. Click here to read my full review of Love Saves the Day.

If you haven’t read Love Saves the Day, now is the time to purchase the paperback. And if you’ve already read it, this is a great time to get extra copies as holiday gifts! Gwen Cooper is donating 200% of her royalties on all paperback sales through Sunday to Blind Cat Rescue & Sanctuary, Inc. in memory of Homer, who passed away in August. Homer’s life is, of course, the subject of Gwen’s book Homer’s Odyssey: A Fearless Feline Tale or How I Learned About Love and Life With A Blind Wonder Cat.

A brief interview with Gwen Cooper

Blind Cat Rescue is a cause near and dear to Gwen’s heart.  “I can’t think of a more meaningful way of continuing Homer’s legacy than by supporting their work,” Gwen told me. “I’m also personally indebted to Alana Miller, the Executive Director of BCR. Back when Homer’s Odyssey was just a proposal for a book that was struggling to find a home with publishers who were skeptical about a blind-cat story, I ended up speaking with Alana over the phone. Naturally, this is an issue that she’s passionate about as well. Her enthusiasm helped reignite my own and made it easier for me to persist. So I definitely owe her one!”

The paperback version, which came out October 22, got a brand new cover. I asked Gwen which cover version she preferred. “I have to admit that I’m more partial to the paperback cover,” she said. “I just love the store in the picture, and the cat in the window as if she’s inviting readers to join her inside, and I think that overall it conveys a lot more about the setting of the book. I think my publisher did a fantastic job with it.” I have to agree with Gwen. What do you think? Which cover do you like best?

The hardcover version of the cover

I asked Gwen what she is currently working on, hoping it would be another cat book. “I’m working on a few things, one of which is a potential “mini-sequel” to Homer’s Odyssey. It will probably be an ebook, as I don’t think it will be long enough to justify a traditional book, since Homer’s Odyssey covers all but the last three years of Homer’s life.” Gwen adds, “things have been a bit hectic the last few months, between touring and gearing up for the paperback launch–and, of course, it’s been a difficult time in my personal life. But I’m very much looking forward to getting everything down while it’s still fresh in my mind.”

Click here to purchase Love Saves the Day from Amazon

Love Saves the Day is also available from Barnes & Noble, Books-A-Million, your local independent bookseller (if they don’t have it, you can ask them to order it,) Target, and Costco.