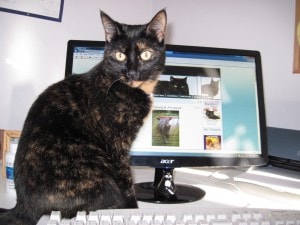 My office is my favorite room in my house  – which is a good thing, since I spend so much time in it! I have a big, white corner desk, a window with a beautiful view of the trees in my backyard, book shelves filled with treasured books and mementoes ,and a comfortable chair in one corner, which serves as meditation chair, editing chair, proofreading chair, and, of course, kitty cuddling chair. 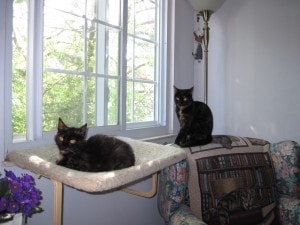 Since I spend most of my day in my office, it’s not surprising that Allegra and Ruby do, too. They both like to hang out on the window perch next to my desk. They also like to help me work. You didn’t think I get all this writing done all by myself, did you?

As you can see in the photo at the very top, Allegra likes to sit right in front of my monitor. Continue Reading 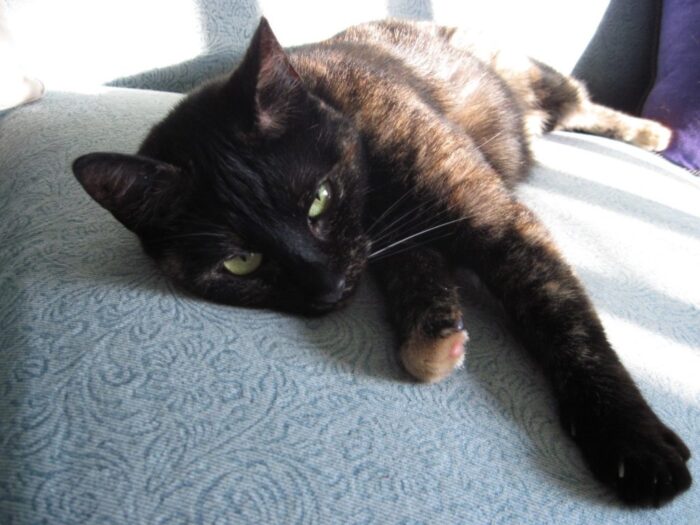 Their mom, not so much. Actually, I do like hot weather and don’t mind temps in the 90’s – but not when those 90’s are inside my house.

We were affected by the massive power outage that hit the Mid Atlantic after a severe storm known as a “derecho,” a term I don’t ever want to see in a weather report again, came through here this past Friday night. But why don’t I let the girls tell you what happened.

Allegra: Friday night, we were all snuggled up in bed with Mom, and I had just started to drift off to sleep when out of nowhere, this rush of wind hit the side of the house. It felt like the whole house was shaking!

Allegra: I jumped off the bed and ran to my safe place.

Ruby: Mom? Why are you getting up? We just went to bed!Continue Reading 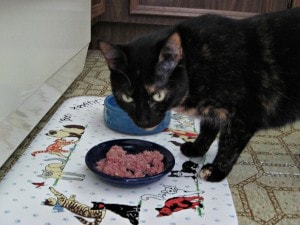 In my reccent post An inside look at how one small company makes safe pet food, I introduced you to Pawgevity, a small manufacturer and distributor of raw petfood based in The Plains, VA. Pawgevity is involved in every aspect of the food they make, from farm to bowl. Their meat and produce is sourced from local farmers who follow humane practices. Pawgevity owners Carole and Norman King personally visit each farm they work with.

I recently  had an opportunity to visit Pawgevity’s offices. Located in a refurbished former railroad depot, the offices features giant high ceilings, whitewashed brick walls, dark wood floors, a cozy seating area for visitors, and, of course, a freezer full of their products. I got to visit their spotless kitchen, where they prepare the organic produce that goes into the food. After a tour of the premises, and chatting with Carole and Norm for a while over ice cold lemonade, I was delighted to find out that they are adding a new line of rabbit food to their product offering.Continue Reading 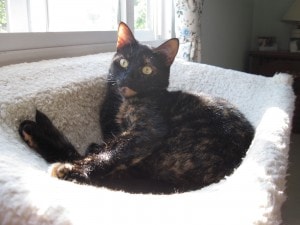 Hi everyone, it’s Allegra! Today, I get to brag a little. I wasn’t going to even write about this, but Mom is so proud of me, and she said if I should share with all of you how brave I was last week.

Those of you who’ve known me for a while probably remember that I used to be very scared of bad weather. I know lots of kitties are afraid of thunder, but my fears went beyond that. I even felt afraid when it rained a lot. The way that rain sounds against the roof and windows – oh, it was just so scary!

Thankfully, I have a good, safe place for riding out storms. There’s a small bathroom in our basement. It has no windows, so it’s nice and dark in there. There’s a shower stall with a curtain, and that’s where I hide: in the far corner, behind the curtain. It’s cozy and quiet there.Continue Reading 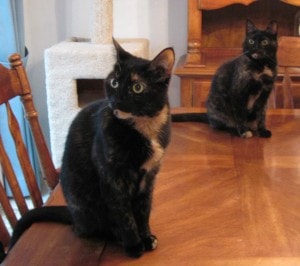 The other day, I was sitting in my living room reading when I heard a commotion on the landing below. I got up to check, and found Allegra and Ruby intently following the movements of a small moth, and occasionally pouncing on it. They rarely play together, so even though I felt sorry for the moth, it was delightful to see the two of them in cahoots like this.

True to form, Allegra mostly watched and waited, while Ruby batted the moth around. Occasionally, Allegra would take a half-hearted swat at it, but she seemed to have more fun watching Ruby play. After a minute or two, I went to get the camera.

As I was filming the video below, I reflected on how this was a reminder of our housecats’ true natureContinue Reading 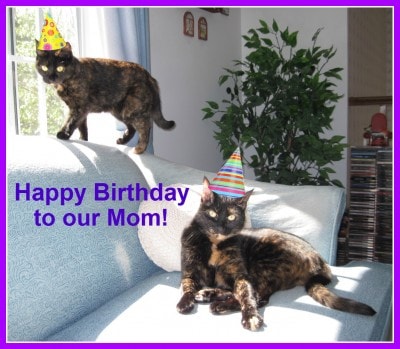 Allegra: Ruby, do you know what day it is today?

Ruby: Of course I do, Allegra. It’s Mom’s birthday! Happy Birthday, Mom! Allegra, do you think she’ll get mad at us for sneaking into the computer room in the middle of the night to post this?

Allegra: I don’t think so, Ruby. I think she’ll like our surprise. We should do some other nice things for her today. You know how she always makes our birthdays so special?

Ruby: We should make her a tuna cake! Yay!Continue Reading 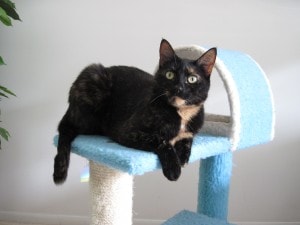 Hi everyone! Today, I get to brag a little about myself!

Those of you who’ve known me for a while may remember that I used to be really scared of loud noises and storms. It wasn’t just thunderstorms that scared me – even a heavy rain storm would make me run for one of my safe places.

I have a bunch of those. My favorite one is behind the shower curtain in the downstairs bathroom. It’s dark and safe down there, and I can’t hear the sound of the rain on the roof or against the windows. I also like to hide inside the kitchen cabinets (and before Mom discovered that hiding place, I scared her really badly when she couldn’t find me anywhere in the house one day).

I know Mom always felt bad for me when I got scared, and she tried everthing she could think of to help me. Continue Reading 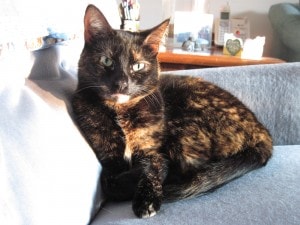 Today is my adoption anniversary! I’ve been in my forever home for two years now! Back then, I thought that day was the happiest day of my life for sure. But every day since then has been even happier, and things got even better when Ruby joined us last year.

I love my life! I love my Mom, and I love my little sister, even if she sometimes is a pain in the you know what. We have so much fun together, and Mom makes our lives so nice.

Look how tiny I was back then! 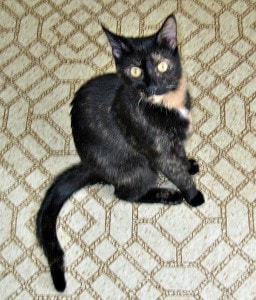 When I first came here, my big sister Amber taught me how things were done in my new home. Continue Reading 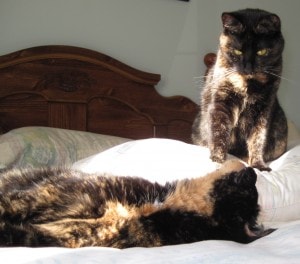 Allegra and Ruby sleep with me every night, which makes bedtime one of my favorite times of the day. Most nights, Allegra joins me first, usually within a few minutes of me going to bed. Ruby tends to be busy at night and often has mysterious Ruby things to tend to before she joins us an hour or two later. But why don’t I let them tell you about bedtime rituals at our house.

Allegra: I love when bedtimes gets near – it’s one of my favorite times of the day, too! I can tell we’re getting close when Mom brings out the toothbrush and toothpaste. She brushes Ruby’s and my teeth, and then we get a treat.

Ruby: Yay, treats! I don’t mind having my teeth brushed, but the treat is the best! It’s really big, and before I eat it, I bat it all over the house! Wee!!! 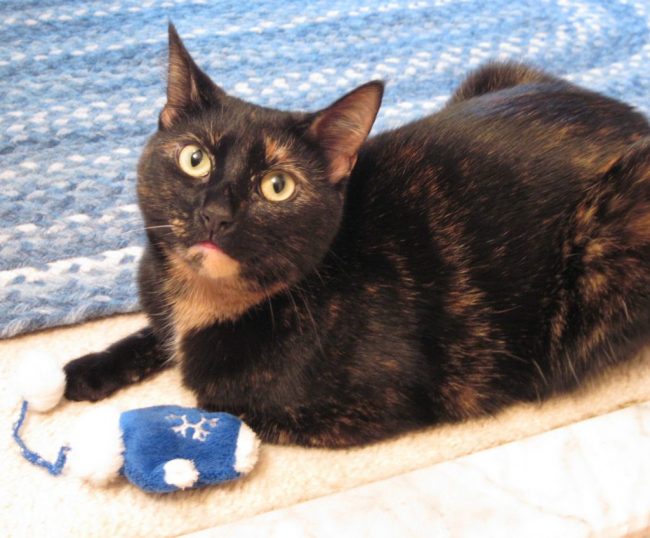 Allegra has a very special toy. It’s not fancy; in fact, it’s an ancient toy that actually belonged to Feebee, who has been gone for twelve years now. She dug it out of the toy basket one day, and apparently decided that it was going to be her “baby.” It’s a soft, plush little stuffed mitten with a tail that has a pompon at the end. She never actually plays with it, but yet, it’s clearly very special to her.

Amber had her own version of this special toy: a green and tan fuzzy mouse that I got for her when she first came to live with me. For the entire ten years that she was with me, that mouse was her special “baby.” Like Allegra, she’d pick it up, carry it around the house, crying and yowling. Amber would often sleep with her “baby,” something I’ve not seen Allegra do. Continue Reading 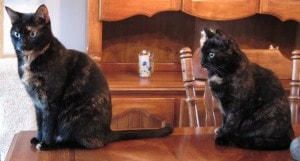 Hi, everyone, it’s Ruby! I had to wait until Mom left for a little while to get on the computer. She told Allegra and me that we couldn’t write anything until after our big blog anniversary next week, because she doesn’t trust us not to spoil the surprises she has planned. But it’s just so exciting, you have no idea! It’s so hard to keep quiet!

Allegra: Ruby! Get away from the computer. You know Mom made us promise not to say anything to anyone!

Ruby: I’m not saying anything. I’m just typing away on this keyboard…

Allegra: Come on Ruby, you know better than that. Everything we write on here is read by thousands of people.