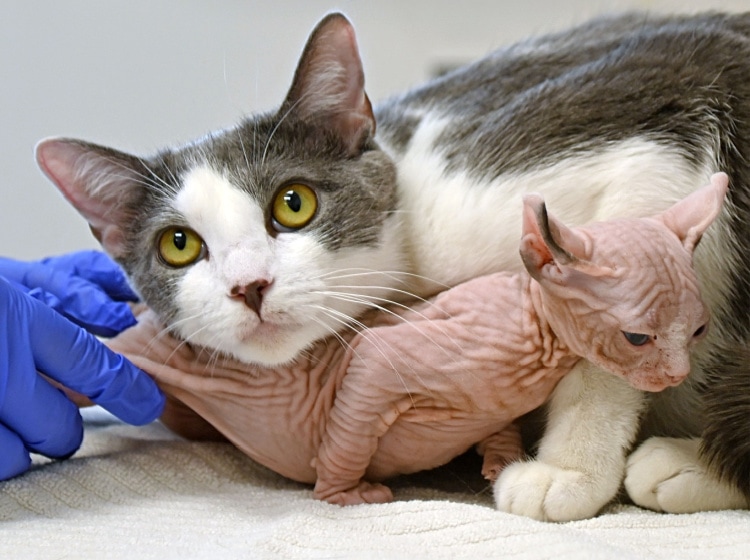 When a newborn sphynx kitten named Cleopatra was brought to the Helen Woodward Animal Center in Rancho Santa Fe, California after being rejected by her mom, staff began bottle feeding the little baby to nurse her back to health, but they knew that ideally, the little one needed a nursing mom. Six days later, a pregnant domestic short-haired cat named Ballerina arrived from a partner shelter — and gave birth three days later. According to animal center staff, Ballerina was extremely affectionate and welcomed Cleopatra as one of her own. For more about the little family, visit People.com.

If you missed any of the stories featured on the Conscious Cat this week, here’s a recap: on Sunday, we celebrated Mother’s Day, on Monday, we told you how the Assisi Loop helps 15-year-old Larry with multiple health issues, on Tuesday, we featured a limited edition cat bath mat from Triple T Studios, on Wednesday, I shared my story of how Feebee, my first cat, literally saved my life, on Thursday, we reviewed the Floof cushion from Tuft + Paw, and on Friday, we reviewed Purr: The Science of Making Your Cat Happy.

Today’s video cracked me up. I wonder where kitty found the toy? Enjoy!