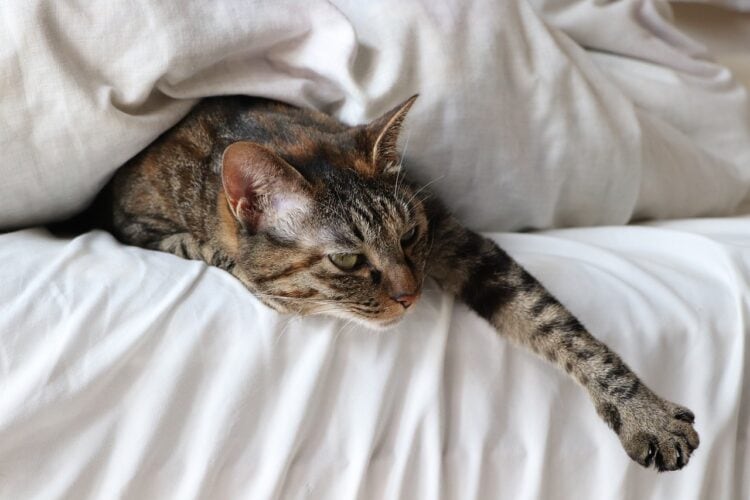 Do your cats wake you at the crack of dawn? Are they keeping you from getting a good night’s sleep? As much as we love our feline family members, most of us would prefer to not have that love expressed by a pounce on our chest at 4am.

Why are cats up so early?

The first step in changing this behavior is understanding why cats do it. Cats are, by nature, nocturnal animals. They hunt and eat primarily at night. Even though studies have shown that domestic cats adapt their cycles to their environment and to human activity, in many cats, this natural instinct still dominates. Add to that that most of our cats are left alone for much of the day and probably spend the bulk of that time sleeping, and it’s no wonder that they become active at night.

There are two main components to changing this behavior:

If your cat wakes you up early in the morning, your first inclination is probably to try and get back to sleep. However, in most cases, it’s simply not possible to do that with a cat either jumping up and down on you, attacking your feet, of pulling your hair. So eventually, you get up and feed the cat. And guess what you’ve just done? You’ve rewarded the behavior you don’t want.

You have to break this cycle – and if you stop responding to your cat’s attempts to get you out of bed for two weeks, you will most likely succeed. It’s going to take some moral fortitude on your part to do this for two weeks, but it will be worth the effort.

Use your cat’s natural cycle to your advantage

If you usually feed your cat as soon as you get home from work, consider moving dinner time closer to bedtime. You may not want to do this all at once because you’ll probably have a very unhappy cat on your hands, but if you can gradually feed her half an hour later each day, you should be able to shift her feeding schedule without too much fuss.

Play with your cat before feeding her. I can’t stress the importance of ritualized play enough, especially for indoor cats. Five to ten minutes, ideally at least twice a day, and at the same time each day, will go a long way toward alleviating all sorts of behavior problems. Playing with your cat before feeding her mimics the cat’s natural behavior of hunt, kill and eat.

If you don’t want to change your cat’s dinner time to closer to bedtime, feed her at her usual time, but cut back on the amount just a little bit. Feed the remaining amount as a bedtime snack after a play session just before bedtime.

After you’ve implemented the changes above, you have to remain committed to give the new routine time. It can take a couple of weeks or longer for your cat to accept that things have changed, and it’s up to you to hang in there and remain consistent.

This article was first published in 2012 and has been updated.