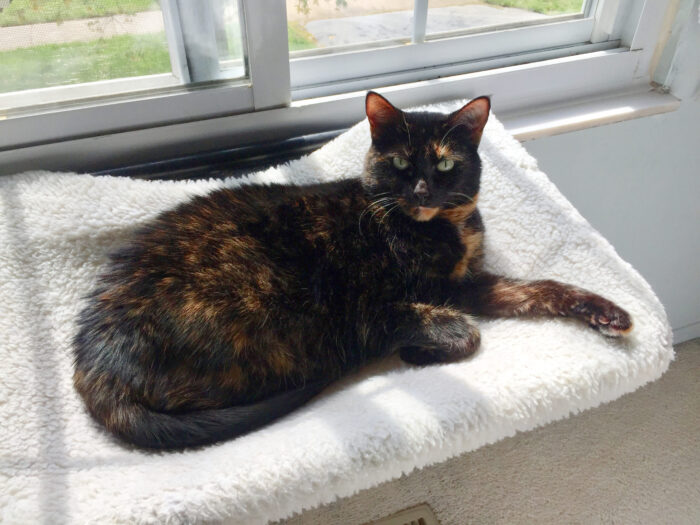 Over the years, many of you have commented on Allegra’s window perch. It’s definitely one of her favorite places to hang out, as it was for all the cats that came before her. In fact, I bought this perch in the mid 1980’s for Feebee, and it’s held up well all these years.

Until a couple of weeks ago, when one of the supports cracked. I’m guessing 30+ years in the sun weakened the plastic. Allegra was on the perch when I noticed it, and it didn’t bother her at all, but of course, I immediately took it off the ledge. Luckily, I had a second perch in my office, which Allegra hasn’t used in  years, so I simply moved that to the bedroom. Since I had it apart anyway, I thought, why not wash the cover. Usually, I just use a lint brush and spot clean as needed, but this just seemed like a great opportunity to toss it into the washing machine. Big mistake! But why don’t I let Allegra tell you the rest of the story. 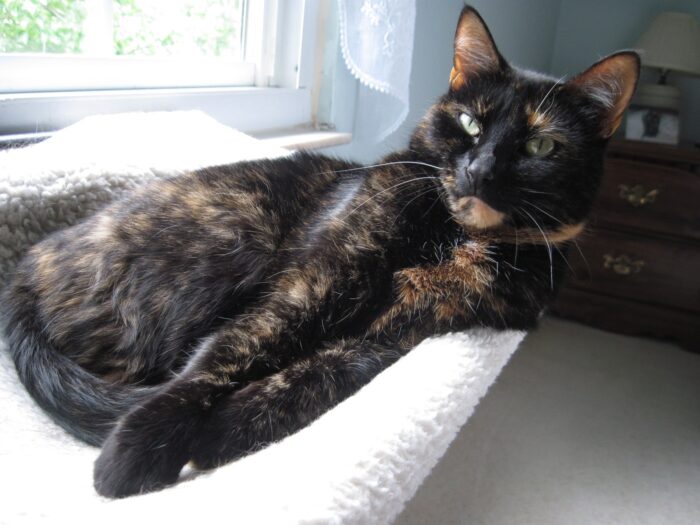 Hi everyone, it’s Allegra! So, Mom already told you about the broken frame on my window perch. No big deal, but, she’s only human, so of course, she turned it into a big deal. I saw her take the perch apart and mutter under her breath. Then she brought the perch from the office and put it up in the bedroom. I thought that would be the end of it, but no! The next time I went near the perch, it didn’t smell like anything I remembered! My purrfect perch was no longer purrfect. I absolutely refused to go up on it!

Mom did her best to convince me that nothing had changed. She picked me up and put me on the perch, but I wanted nothing to do with it and jumped off immediately. She put treats on it. Now that was more interesting, but I still didn’t want to get up on it. Instead, I braced myself on the frame with one front paw and fished the treats off with the other paw. I’m resourceful! (And it made Mom laugh that I circumvented her trick that way.)

Mom, being the smart human that she is, even if she can be a little slow at times, finally realized what she had done. After I had spent years and years to get that perch just right, she ruined it for me by throwing it in the washer and getting rid of all the scents I’d worked so hard to put on it. All things considered, she caught on pretty quickly, and I could tell she felt really awful, but this wasn’t something that could easily be undone.

But gradually, over a few days, the perch started to smell a little bit more like something I might want to make friends with again. At first, I wasn’t sure why that was, because I sure hadn’t gone near it. Then I realized that every time after Mom brushed me, she took the hair out of the brush and distributed it over the perch. After a few days of this, I deigned to give it a try.

My perch was back! It smelled like me again! So even though I was really mad at Mom for ruining it at first, I love her for not giving up and finding a way to fix it.

A note from Ingrid: I still can’t believe I didn’t think before washing the cover. I have never washed a cat bed for as long as I have had cats, for that very reason. I have only ever spot cleaned beds or perches before, unless something got so soiled that it was absolutely necessary to throw it in the washer. Ditto for replacing worn scratching posts. They may look ugly to us, but from your cat’s point of view, they’ve worked really hard to get them just right. And let me tell you, it felt really weird to be putting cat hair BACK on something instead of taking it OFF something! In addition to using Allegra’s fur to restore her scent to the perch, I also rubbed a clean cloth against her cheeks several times to collect pheromones and then rubbed that cloth all over the perch.

Sadly, they no longer make this particular perch, so I sure hope that it will continue to hold up well. The closest I have found is the K&H Pet Products Kitty Sill*. You can find other window perches in our product guide.

19 Comments on Allegra and the Window Perch Calamity