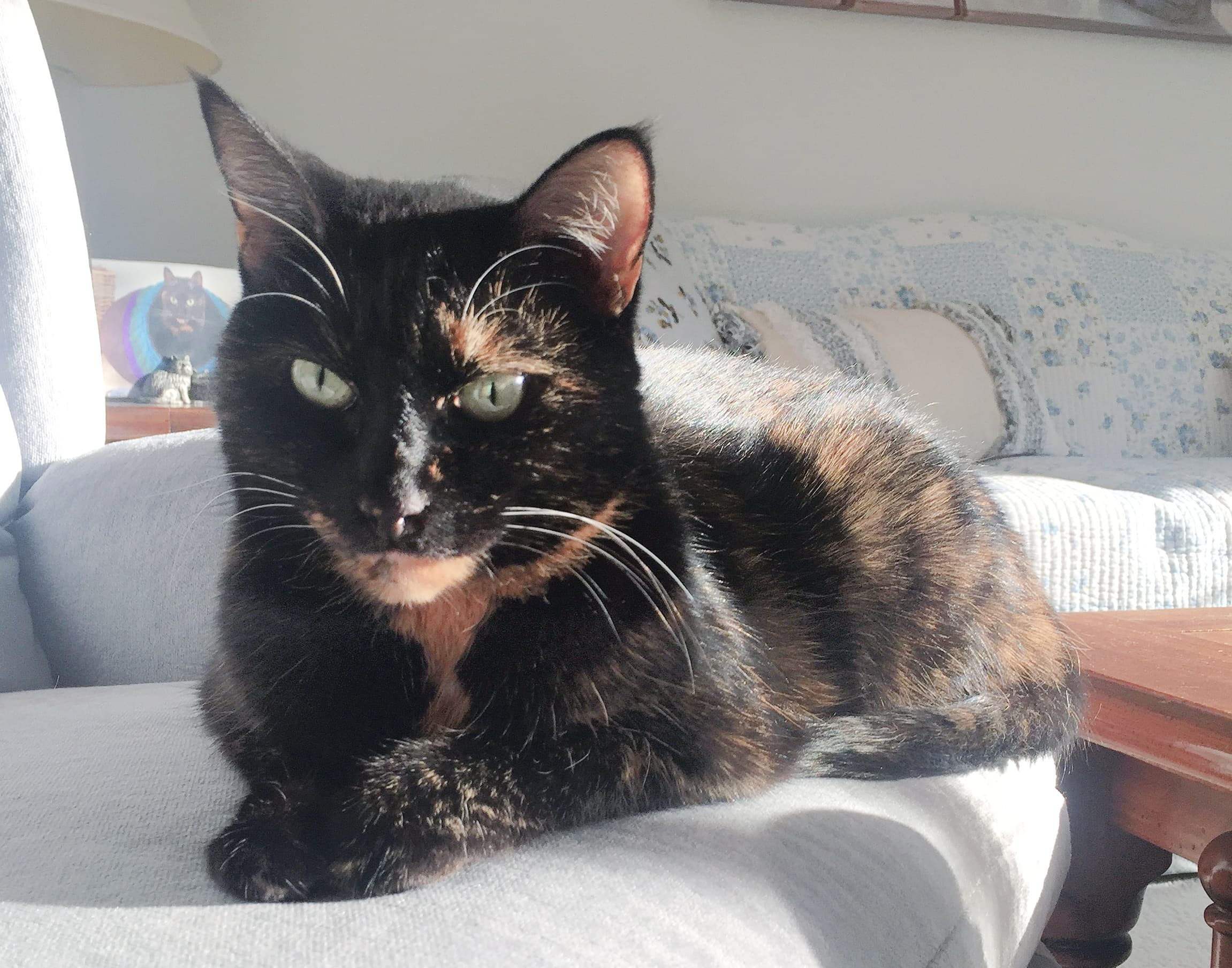 Let me start this off by saying don’t be alarmed by the subject line. Allegra is doing just fine. We’ve been dealing with a few ongoing health issues, and I thought it was time to update you.

The bottom line: Allegra is hyperthyroid. This came as quite a surprise to both me and my vet.

Allegra did not show any of the symptoms typically seen in hyperthyroid cats. She wasn’t losing weight, she didn’t have a voracious appetite, she wasn’t restless or vocalized excessively other than her normal tortie talk. In fact, the mild symptoms she did show pointed to other possible issues. Occasionally, she’d vomit up some water, which I chalked up to her drinking too fast. She had an occasional mild cough. And she was overgrooming. Even though neither my vet nor I were overly concerned with these symptoms, something was clearly not quite right. Since Allegra was happy, playful, affectionate and eating well, we chose a conservative “wait and see” approach.

Last summer, her occasional overgrooming worsened. She had been overgroming on and off for several years, on a small area on her belly. She’d do it for a few months, then she’d stop. But over the summer, that small bald area kept getting bigger. I chalked it up to stress. I thought that she was probably picking up on my stress, and let’s face it, 2020 was probably the most stressful year any of us ever experienced.

My vet did not agree with my theory. In her experience, the majority of cats who overgroom do so because there is an underlying physical cause. ” Whenever I have a patient who is overgrooming her belly, I always look for physical causes, whether it’s pain or allergies,” says Dr. Tasi. “Overgrooming caused by stress typically doesn’t happen on the abdomen, but is more likely to occur on the front legs.” Dr. Tasi added that dermatologists now think that psychogenic overgrooming, the diagnostic term for overgrooming for mental or emotional reasons, was over diagnosed in the past. “Most of these cats are experiencing some sensation such as itching or discomfort that is driving them to overgroom and barber their fur.”

I declined allergy testing. I wasn’t comfortable dropping her off at the curb at a veterinary dermatologist I had never met. Serum allergy testing, which we could have done in home, is not considered reliable in cats. We decided to attempt a food elimination trial to rule out a food allergy, even though that was unlikely. Food allergies more typically  manifest as GI symptoms or, when there is a skin component, around the face. Unfortunately, Allegra rejected all the novel proteins and hydrolized protein diets I tried for her. Food elimination trials only work if the cat eats nothing but the novel protein. Clearly, that wasn’t going to happen.

We tried a number of holistic remedies, but Allegra didn’t respond to any of them. She became increasingly itchy. In June, I finally agreed to a short course of steroids. If the steroids stopped the itching and overgrooming, we’d know for sure the cause was physical. If it didn’t, it was stress induced.

After three days on a very low dose of Prednisolone, the itching stopped. We had our answer. As much as I hated the thought of having her on steroids long term, this was a quality of life issue. If anything, I felt guilty for waiting so long to put her on Prednisolone. I don’t think I realized until she stopped just how much time she’d spent every day grooming herself.

Allegra is now on a very low dose of Prednisolone once a day. In addition to stopping the overgrooming, it has also had a positive effect on her occasional vomiting up of water, and her occasional coughing. Both have completely resolved, which tells us that there was systemic inflammation present.

Steroid therapy requires regular bloodwork to monitor any potential adverse effects. We did a full panel in December, after she had been on Prednisolone for about six months. Everything looked beautiful. Except her thyroid, which was elevated. Given her complete lack of hyperthyroid symptoms, this came as a bit of a shock.

There are currently three treatments for hyperthyroidism: medication, surgery, and radiactive iodine (I-131) treatment.

I did not want to have to consider I-131 at this time. Amber went through it in 2005, but she was a completely different cat. She was laid back and mellow, and while the three days she was at Radiocat were the longest days of my life, she did really well. Allegra is a super sensitive little girl, and I don’t think  she’d do well in a cage. I also knew that I couldn’t handle her being away from me for three days. Not now, not with Covid, when I’m home all the time with so few distractions available to me.

We started her on methimazole (brand names: Tapazole®, Felimazole®) in December. I was praying that she would tolerate the medication. The most common side effects of this drug include vomiting, anorexia, and tiredness. Other, less common side effects such as gastrointestinal effects and mild changes in blood cell counts are usually temporary and resolve with time. However, a small percentage of cats will suffer severe facial itchiness, and severe changes in blood cell counts, liver disease, and immune-mediated disorders (when the body’s immune system attacks itself.) Thankfully, she showed no side effects, and when we rechecked her labs in January, her thyroid had come back into the normal range.

For a very small number of cats, itchiness can be a symptom of hyperthyroidism. We had hoped that this might be the case for Allegra, and we stopped the Prednisolone once we knew her thyroid was regulated again. Sadly, the itching returned with a vengeance.

So now Allegra gets methimazole twice a day, and Prednisolone once a day. Thankfully, she is easy to pill. I put her quartered and halved pills into an empty gel cap and she lets me pop it right down her throat. I follow this with a creamy treat.  Medication should never be given without a chaser of either water, tuna juice, broth or wet food. “Dry pilling” can cause serious damage to the esophageal lining. Allegra has gotten so used to this routine that she will actually demand her medication on days when I run a little behind schedule. Of course, what she really wants is the treat, but it’s still cute when she comes looking for me.

She also gets Aminavast twice a day, which helps support kidney function. It’s a flavorless powder that gets mixed in with her food.

Through all of this, Allegra was and is a happy, playful and affectionate cat. She’s not worried, and I’m trying not to be. We’ll continue to monitor her bloodwork and adjust things as needed. I am beyond fortunate to have a vet who makes house calls so I never had to drop Allegra off at the curb. I’m even more fortunate that my vet is on the same wavelength as I am when it comes to treating Allegra empirically.

As much as I prefer holistic treatments, I’m always open to an integrative approach and never rule out conventional medicine. I’m grateful that my holistic vet feels the same way. Nothing matters more to me than keeping Allegra happy, and while I wish she didn’t have to take two different allopathic medications every day, I’m grateful these drugs are helping her feel good.

I realize that the decisions I’m making about Allegra’s treatment may not be the decisions you might make for your cats in a similar situation. I ask that you respect my choices.  We are in the best possible hands with Dr. Tasi. We are always exploring all diagnostic and treatment options before choosing the ones that are best for Allegra, and for me.

As has been the case with all my cats, to me, the most important thing is to not just take care of Allegra’s medical needs, but to honor her unique personality and spirit in every decision I make about her care.

*The Conscious Cat is a participant in the Amazon Services LLC Associates Program, an affiliate advertising program designed to provide a means for us to earn fees by linking to Amazon.com and affiliated sites. The Conscious Cat is an affilliate partner of Chewy.com. This means that if you decide to purchase through any of our links, we get a small commission. We only spread the word about products and services we’ve either used or would use ourselves.

33 Comments on An Update on Allegra’s Health