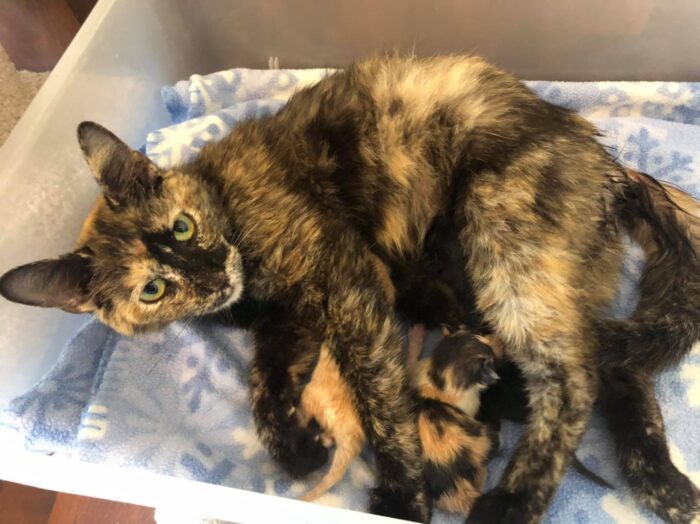 The weather was freezing cold in Indiana when good Samaritans spotted what they thought was just a big chunk of snow and ice by the side of the road. When they saw a pair of eyes glow in the reflection of their headlights, they immediately turned around to investigate. There was a tortoiseshell cat covered in a layer of snow and ice. She was scrawny, cold, curled up in a ball desperately trying to stay warm. Despite being just skin and bones, her belly was round and she appeared to be pregnant. The took the tortie into their car to warm her up and contacted Catsnip Etc., an all-volunteer cat rescue, who took her in. Two days later, she gave birth to four kittens. For more about Camilla and her babies, visit LoveMeow.com.

If you missed any of the stories featured on the Conscious Cat this week, here’s a recap: on Sunday, I talked about the feeling of seeing the light at the end of the tunnel, on Monday, we launched our 12th anniversary celebration with a big giveaway, on Tuesday, we featured adorable cat coffee mugs, on Wednesday, I shared a guest post on how cats are helping us get through lockdown, on Thursday, I announced Gwen Cooper’s new podcast, and on Friday, I took a look at a couple of cat care guides from the 1980s.

Today’s video is a testament to the power of love – enjoy!

5 Comments on Mews and Nips: Tortie Covered in Snow and Ice Rescued Just in Time