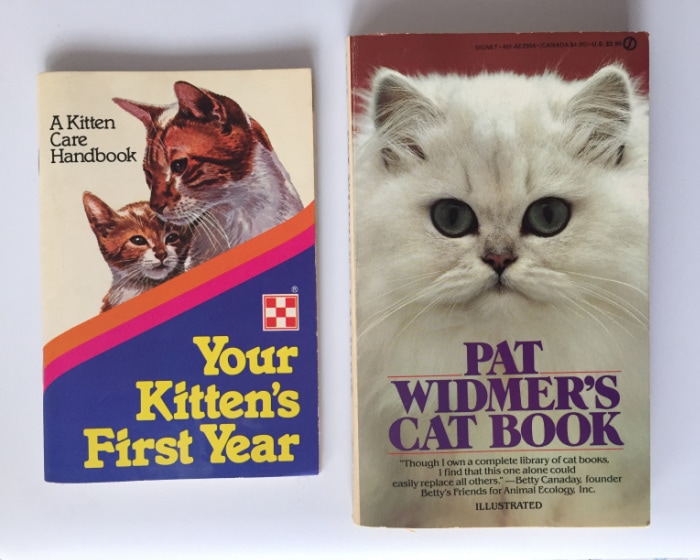 During a recent bout of deep cleaning I found the two cat care guides pictured above at the bottom of a drawer. Your Kitten’s First Year was published by Purina in 1982. Pat Widmer’s Cat Book has a publication date of 1981. I got both books when I got my first cat Feebee in 1984.

The advice presented in both book is almost equally and atrociously bad, and thankfully, we’ve come a long way over the last 40 years in understanding cats.

The Purina guide fails miserably when it comes to nutrition, recommending only dry food, and claiming that  “constantly switching diets easily produces a finicky eater.” In fact, the opposite is true. Kittens who are exposed to a variety of foods at a young age will accept different foods, textures and flavors more easily than cats who have been fed the same food from kittenhood on.

Pat Widmer takes bad nutritional advice a step further, stating that “canned food provides nothing for the cat to chew, smells awful… and is heavy to carry home from the store.” She goes on to state that soft food causes gingivitis, which, according to her, can be prevented by dry food. Of course, nothing is further from the truth.

Much to my surprise, the Purina guide never mentions declawing, something that was sadly routinely advised for indoor cats back then. Pat Widmer devotes an entire sickening chapter to the topic, singing the praises of declawing and patting herself on the back for running one of the first spay/neuter clinics that offered routine low cost declawing on all four paws.

What struck me most about  both guides is the utter lack of any mention of the importance of play for cats. The concept of environmental enrichment didn’t really become a “thing” until the late 1980s/early 1990’s, but it still surprised me that neither of the guides at least touched on the subject of toys for cats.

While these books were no doubt written with the best intention of helping people care for their cats in the best way possible with what was known at the time, I’m profoundly grateful that we know so much more about cats and their behavior now – and I’m sure our cats are grateful, too.