Conscious Cat readers will undoubtedly recognize a pattern here. You could call it a cat’s morning regimen. But as we enter the darkest days of winter – as well as the second year of a pandemic that has us more shut in than ever before – I’m trying to make this my routine as well.

As a writer, I tend to fall into bad habits. I spend too long at my computer, and with each hour my posture suffers. I hunch over the keyboard, which leaves me with back and shoulder strain. I stare too long at the cursor in front of me, willing the words to appear. All the while, Thisbe waits – more or less patiently, in her basket beside me or on a chair nearby. Until, that is, she doesn’t.

Although I often take pictures of her asleep, curled in the basket she appropriated early on, Thisbe – my tortoiseshell companion – is a dynamo. No matter that she turns three this winter,* she remains extremely kitten-ish, full of energy and able to leap several feet in the air, if a toy is thrown properly or a moth or fly gets in. Perhaps that’s because she’s a tortie, with more energy and smarts than any other cat I have had the honor to cohabit with. Maybe it’s just because she’s Thisbe, Slayer of the Catnip Bird and Possessor of Every Box. 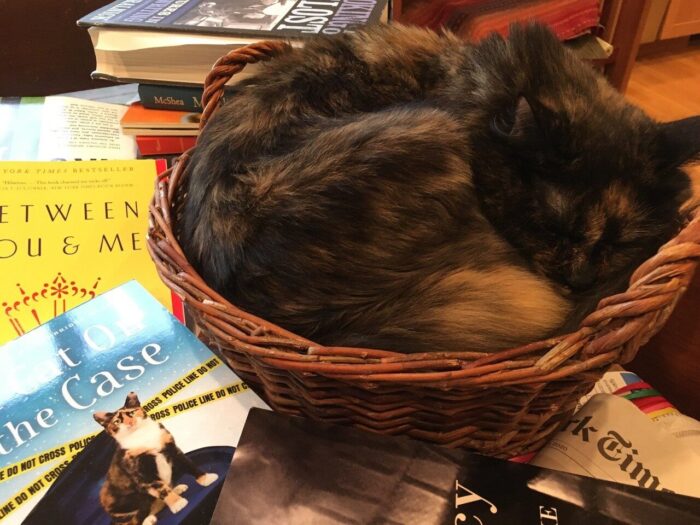 It’s this spirit – her focus and drive – as well as the special warmth of feline bonding that I am trying to put on the page. Yes, the three cats in my Witch Cats of Cambridge series have magical powers. Clara, a calico (and the most Thisbe-like), can shade herself into invisibility, a skill that allows her to follow her human, Becca, out into the world without Becca’s knowledge. (Just as well, because Becca would worry – as would I.) Laurel, whose chocolate-pointed coat reflects the Siamese in her heritage, is a bit vain, but she also has a more sophisticated sense of human relations than her youngest sibling – and the power to “suggest” thoughts to people, while Harriet, the fluffy firstborn and thus dominant of the litter, can summon objects from the ether, which complicates life for their person as often as it helps. These three bicker like sisters do in my new A Cat on the Case, even as they use their powers to help Becca unravel a tale of murder and a musician’s missing violin. But woven into the magic and the mystery, I aim to  capture some of the simple catitude – that special feline character – that we all love. 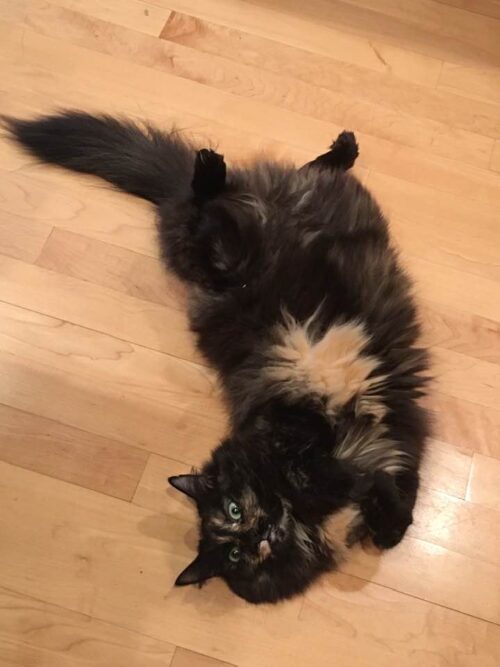 I consider this a worthwhile use of my time and my talents – and I hope, with the release of this, my third “witch cat” mystery, that readers will agree. But even as I labor to depict realistic cat behavior in my books, I often forget its importance to my own life. I sit too long and in too uncomfortable a position, even as Thisbe gets up and stretches. Steals a pen from my desk and chases it, thundering down the stairs. And then, ultimately, comes back – reaching one claw delicately up to get my attention. To draw me into her world, and make me conscious not only of her needs but my own.

She reminds me to take a break. To pull back from the fictional world I’m creating and focus on the real one. Throw a catnip mouse. Run around dragging that long ribbon that needs to be chased and pulled and chased some more. To move and breathe, in other words. Stretch, run around, and repeat. And, yes, when we’re all tired out to look for the sunny spot.  Maybe even to nap. Thisbe would approve, reminding me, as she does, that this is the true magic of cats.

* Yes, Thisbe was born in January – a fact that brought her to me, as the kind woman doing trap, neuter, return realized that the litter she had found was unlikely to survive the bitter cold. 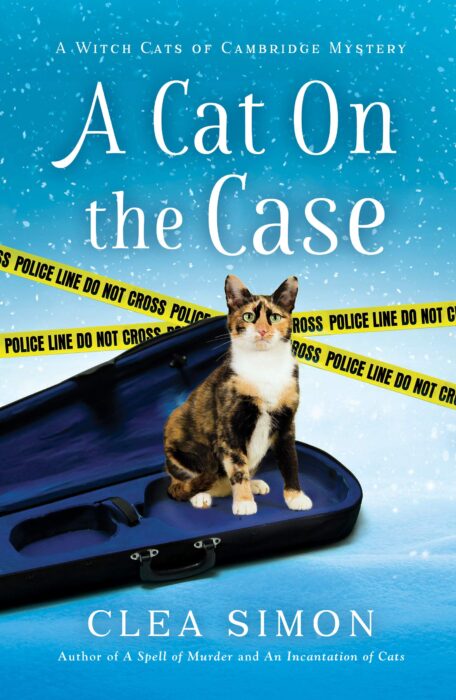 A former journalist, Clea Simon is the Boston Globe-bestselling author of three nonfiction books and nearly 30 mysteries. These alternate between cozies, like her new A Cat on the Case, the third witch cat of Cambridge mystery (out January 26 from Polis Books), and the darker psychological suspense of World Enough (Severn House), a Massachusetts Book Awards “must read,” and her upcoming Hold Me Down (coming Oct. 5, 2021, from Polis Books). She can be reached at http://www.cleasimon.com

12 Comments on Stretch. Run Around. Repeat: How a Writer’s Cat Takes Care of Her Human