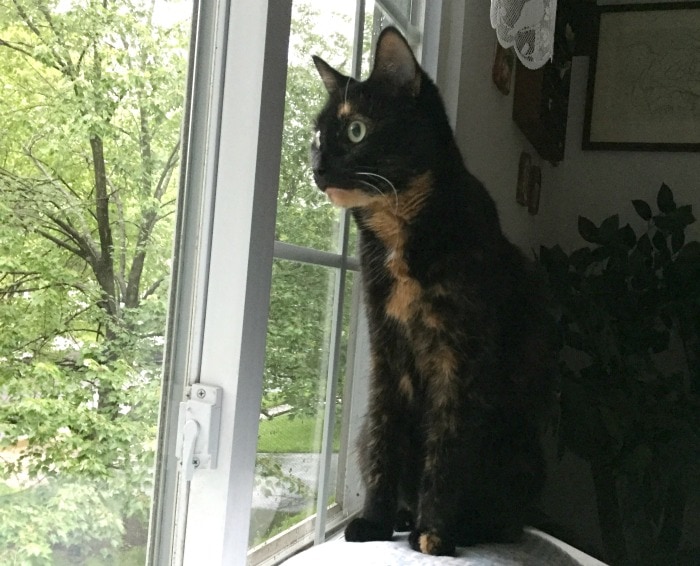 Hi everyone, it’s Allegra! I hope you all are doing as well as anyone can during these strange times. It’s a big job for us cats to take care of our humans right now, isn’t it? They’re all so terribly stressed, and I can’t help but worry about Mom.

I want to tell you about the last couple of weeks here, because it’s been really loud at our house at times! It’s been pretty hot here, and that often means that we get thunderstorms. On top of that, there have been popping noises almost every night last week. Mom says it’s irresponsible humans shooting off fireworks, and that sadly, it happens every year this time of year.

I used to be really scared of loud noises. Any noise – trash trucks going by the house, thunder, fireworks, lawn mowers – used to send me running to my safe hiding space in the bathroom on the lower level of our house, behind the shower curtain.

Over time, I realized that things like trash trucks and lawn mowers were nothing to be afraid of. Now I barely notice them. But up until recently, thunderstorms still really bothered me, but I finally realized that they can’t hurt me, and now I don’t even bother going downstairs.

In fact, the other night, a storm was rolling in, and I sat by the window and watched the wind and lightning, and even the claps of thunder didn’t bother me. Mom snapped the photo at the top. She couldn’t believe what she was seeing!

Mom was actually wondering whether I was channeling Ruby’s spirit. My little sister used to always sit by the window and watch the wind and rain, no matter how many times I told her it was dangerous. “Dangerous?” she’d say and blow a raspberry at me. “Look Allegra,” she’d say, “just come look! There are branches blowing by the window! So cool! Weeeee!!!” I miss my little sister. As to whether I was channeling her, that’s between me and Ruby…

If you need some tips for your cats to help them cope during thunderstorms, please read Mom’s article Thunderstorms and Cats.