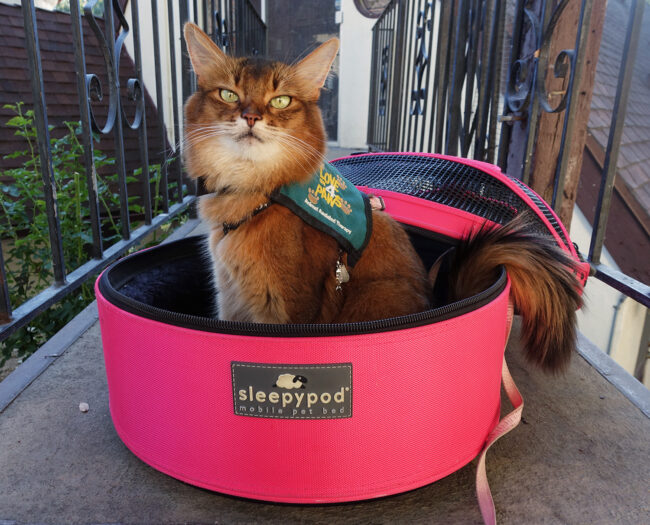 Meet Summer, a stunning six-year-old Somali who shares her adventures on her blog Sparkle Cat.  She was born on March 10, 2014, and was given the full name of RW GP Tajhara Summer Samba. She is an award winning show cat whose happy, friendly disposition made her an ideal candidate to be a therapy cat. We are big fans of Summer and have been following her blog for a long time. I recently had a chance to interview Summer’s human, Janiss Garza, and I think you’ll enjoy learning more about this playful, mischievous and sweet kitty.

Tell us a little bit about how you got Summer.

I’ve wanted a therapy cat since the mid-1990s when I found out about the Delta Society (now Pet Partners). I’m 100% a cat person, and if I were in a hospital or other facility, I wouldn’t really have any interest in seeing a therapy dog. I would, however, love to see a cat! So I’ve always thought that I should pay it forward by being a therapy pet volunteer with a cat.

Finding the right cat was the hard part, especially for someone like me, who won’t own more than a couple cats at once (my outside limit was three). I couldn’t just keep getting cats until the right one came along! Although I’ve mostly had rescues, I did have one breed cat, a Somali, and it turned out her breeder had some lines with amazing temperaments – partly genetics, and partly how they were raised. She was showing a couple of kittens in mid-2014, and the girl in particular was very sweet. By coincidence the Somali I already had passed away around the same time (she had been sick for over a year), so I had room in my life for another cat. I got Summer with the full intention of training her for therapy work.

How did you train Summer for her therapy work?

Summer started competing at cat shows when she was four months old, so I continued doing that, even traveling with her to different states. Cat shows tend to be very noisy and chaotic places, with announcements over speakers, and people hustling about, often with a cat in their arms. All this is actually good training for a future therapy cat, who will have to deal with noisy, chaotic hospital wards.

Another thing required of show cats that is good practice for therapy work is that they need to be bathed and have their claws trimmed before each show. Her breeder started her off on both claw trims and baths as soon as she was old enough. This is also required of therapy cats. While bathing has never been Summer’s favorite activity ever, she has learned it’s part of what she does, and knows that if I’m putting her through that, it usually means there’s an adventure in her near future!

One thing atypical of most show cats is that most exhibitors don’t want their cats touched. It messes up the grooming, and if the person has handled or touched other cats, it could spread disease. I allowed everyone to pet Summer so she could become accustomed to being touched and cuddled. I don’t know how we are going to handle this post-Covid, but I hope at some point she can be petted again at public events. She really misses it.

Just a note: a cat does not have to be pedigreed to complete in cat shows. Both TICA and CFA have Household Pet categories for rescue and mixed breed cats. I consider shows good training for a cat that will be going out in public.

It differs, according to where we’re going. If we are visiting a hospital, I sign us in and we have certain wings and areas scheduled for visits that day. At one hospital, we do bed visits, and we go from room to room, asking if the patient wants a visit from Summer. If they do, I lay a fresh sheet down on the bed, and Summer curls up on the sheet next to them. She usually starts kneading and purring. I did not teach her to do that – she just started doing it naturally when we started visits. I chat with the patient and any visitors. Usually they ask me questions about Summer and the therapy group we’re part of. If we are visiting a waiting area, I just let Summer walk on her leash, and if someone wants to pet or interact with her,  I let them. I keep an eye on the interactions constantly, especially if it’s a child, or someone who is developmentally disabled, to make sure Summer is safe and the person does not even come one inch within harming her.

Another medical facility we visit is a Shriners, which is all outpatient children. There, we visit the waiting area, the exam rooms – and they even let us into the surgery prep and recovery rooms.

Occasionally, we do an outside visit, like at a fair, or giving a talk to a group. Usually I use a smaller carrier to transport Summer to her visits and carry her around in a sling inside the hospital, but for these I use the Sleepypod bed carrier, and it becomes her home base. She can sit in the bottom part of it while I’m talking, or she’s hanging out at the booth. It’s comfortable, and she knows it’s her own personal spot. 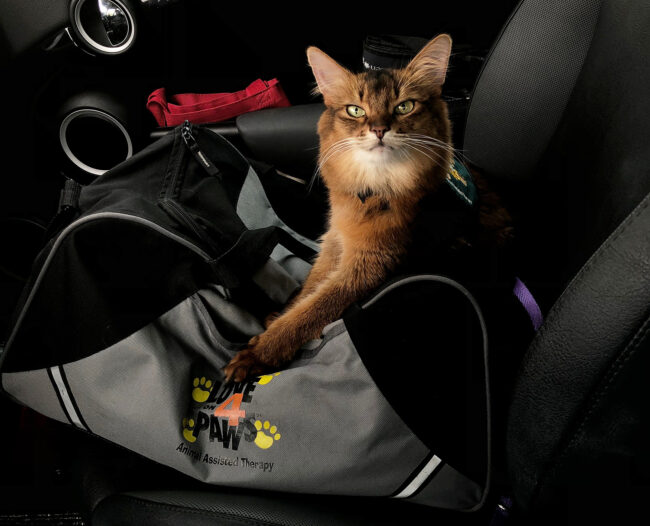 What has it been like for Summer the past couple of months?

She’s been frustrated! She’s been more needy, and been a little bit of a troublemaker because she is bored.

I’ve been taking her to pet stores a lot to get her out of the house, and taking her out on her leash more around the front and back yards, but it’s not the same. For a couple of months, when I took her to the pet store, people wouldn’t look at or touch her, and it was clear she was confused and didn’t understand why nobody was interacting with her. Lately, as things loosen up a bit, people have been talking more to her at a socially safe distance, and if there is hand sanitizer (there usually is), I let the staff pet her. I also give her a wipe down when we get home, along with washing my own hands.

On a positive note, visiting all these hospitals means she isn’t disturbed by seeing people wearing masks.

You’ve also traveled with her, both via car and plane. Can you talk a little about traveling, and why you love Sleepypod’s carriers?

Summer loves traveling, especially by plane! Unlike most humans, she thinks airports are fun, and loves the attention she gets when I carry her through TSA. When traveling with a pet in cabin, you are required to take it out of the carrier and walk though the screener with your pet in your arms. She also loves people watching when we reach the gate. She is not as fond of car travel, mainly because she thinks she should be sitting next me on the front seat, like any other human passenger! Being securely fastened in the back seat makes her feel like she’s being ignored.

And she adores hotel rooms! The moment I let her out of her carrier, she rolls around on the rug, and then proceeds to explore the room, purring and making happy paws. I have a whole routine for setting up the room to make it safe and comfortable for her – but that’s enough for a whole ‘nother story. If it’s a hotel with interior hallways, she nearly always gets to go for a walk. She loves that, and has come to expect it.

As for carriers – it seems like I have a carrier for every purpose! For trips to cat shows, or car trips that will last over an hour, I use the round Sleepypod Mobile Pet Bed. It’s roomy and comfortable for her, and she’s used to having it around the house to nap in. And as I mentioned earlier, it makes a good home base if she is benched somewhere and interacting with the public. I have both the Atom and the Air for air travel, and Summer likes them both. I often use the Atom for short car trips too, since it’s smaller and more compact than the Air or round Sleepypod.

What would you tell someone who wants to train their cat to be a therapy cat?

Having a therapy cat is a commitment in a lot of different ways. You have to commit to a volunteering schedule, commit to training your cat to go places, and commit to keeping up her social skills. But it’s also really rewarding, and you’ll wind up having a very special relationship with your cat. Unlike dogs, cats aren’t naturally built for visiting strange places and meeting people, so your cat has to trust you implicitly. That comes with time and practice. You need to take your cat out a lot, get her used to baths and claw trims, and show her something new frequently. And the whole time, she has to know you have her back. And you must never betray that trust. Wherever you go with her, your cat and her well being is your first priority – even more so than with any other cat you’ve ever had.

If you don’t have a cat yet, but want one to train for therapy work, should you get a kitten or an adult cat? Honestly, it’s not that crucial. Many people say an adult cat is preferable because their personality is fully developed, and you don’t know if a kitten will be as outgoing when it reaches adulthood. I’d say that a lot of how a cat is depends on you, the cat’s person. But there are genetics they are born with. Summer is a pedigreed Somali that comes from a line of cats that has especially sweet, friendly natures. But there’s still no guarantee, and a lot of certified therapy cats are rescues.

Because there is so much for both the cat and the human to learn, and because cats’ temperaments develop as they mature, the therapy organizations will only evaluate them after they are a year old. Summer was a little over two when I had her evaluated. Keep in mind that the evaluation is for the owner too, and you need to be able to follow protocol and direction. Hospitals especially are pretty firm about their rules.

Always remember, you and your cat are a team and you work together. A lot of success with therapy pet work relies on that.

*FTC Disclosure: This is a sponsored post, which means that I was compensated to feature this content. Regardless of payment received, you will only see products or services featured on this site that I believe are of interest to our readers. Sleepypod is also a sponsor of Summer.

10 Comments on Meet Summer, Therapy Cat and Kitty on the Go