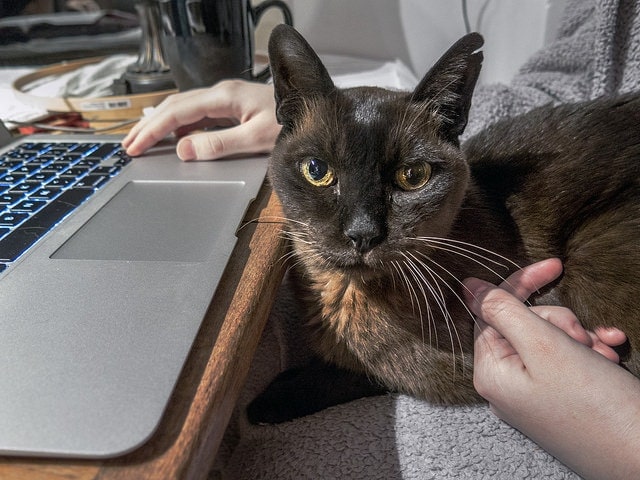 Every cat has a unique personality, and some cats are more independent than others. And while most of us want our cats to cuddle with us and let us hold them, it’s not in every cat’s nature to show affection by snuggling up on a lap.

Ruby was a total snuggle bunny. I called her my “velcro kitten,” because if she had had her way, she would have been permanently glued to me 24/7. She was like that pretty much from the time I adopted her, with the exception of her first few days in our home, when she was a bit more reserved as she was getting used to her new environment.She loved to be held and squished and kissed.

Allegra, on the other hand, was not a lap cat for the first two or three years after I adopted her. Every once in a great while, she’d grace me with some lap time, but usually only for a few minutes, and most definitely on her terms. Around the time she turned five, I began to see a gradual change. She came up on my lap more frequently when I settled in for some TV watching in the evening, and once she was settled, there wasn’t much that would dislodge her – not even Ruby trying to hone in on her lap time! Ruby did not like seeing Allegra on my lap, and sometimes she tried to wedge herself onto my chest while Allegra was sleeping on my lap. Much to my surprise, Allegra tolerated this, and it was usually Ruby who left first, with a great big huff.

Since Ruby died almost six months ago, Allegra has become even more affectionate. She now frequently comes up on my lap when I sit down to read or watch TV, and shes stays longer. She still does this very much on her own terms, and she most definitely won’t allow me to pick her up and place her on my lap, something I could always do with Ruby.

I did nothing to encourage Allegra’s change in behavior with regard to lap time. Even though I missed having a lap cat after Amber died (Allegra was an only cat for about a year after Amber’s death,) it never felt right to me to try to make her into something she was not.

However, there are things you can do to teach your cats to enjoy being on your lap.

When you are relaxing in your favorite spot, arm yourself with a bag of your cat’s favorite treats. Initially, simply toss a treat on the floor next to you occasionally, and let your cat associate you being in that spot with something pleasant. Gradually move the treat closer to you. Place treats on the couch or chair next to you and pet and praise your cat when she comes up to get them. Eventually, place treats on your lap. Profusely praise your cat when she comes to get the treats, but don’t hold her down while she’s on your lap.

Move her favorite cat bed or blanket next to you

If your cat has a favorite blanket or cat bed, move it on the couch next to you. Place treats inside or on top to make the location even more interesting for your cat. Praise her when she sits next to you, but don’t force her to stay.

Ultimately, it’s all about trust

While not every cat will be a lap cat, almost every cat can learn to trust, and show us affection on her own terms. It is called unconditional love for a reason, right? And while I completely understand that it’s hard when a cat doesn’t seem to reciprocate the love and affection you shower on her in the same way, Allegra has shown me how rewarding it can be when a formerly reluctant lap cat changes her ways.

Is your cat a lap cat? If you had to teach her to become one, what has worked for you?

This post was first published November 2015 and has been updated.

26 Comments on Can You Teach a Cat to be a Lap Cat?