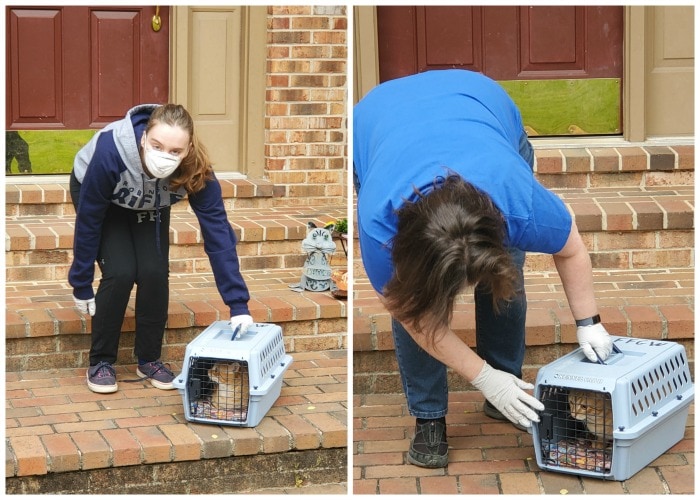 It was the best of times, it was the worst of times… if you are an animal rescuer. As municipal shelters closed to the public, they besieged rescues with requests to take cats. However, with adoption events suspended and PetSmart adoption centers closed, the ability for rescues to find homes for any of those animals seemed out of reach. Yet, when the Feline Foundation of Greater Washington (FFGW) put out a plea for fosters for the cats we already had at our center at PetSmart, we were flooded with offers – and ended up with more potential fosters than we had cats.

It seemed that folks quarantined at home realized the great opportunity to take care of homeless kitties. But how could we make that work?

Thinking outside the litter box

The answer came in the form of an email from the daughter of a friend. Her cat had passed away and she was looking to adopt a pair of kittens. Did we have any? At almost exactly the same moment, we received a desperate email from a group that works with a rural shelter. Two kittens were scheduled to be put down the next day.

Normally, we would take the kittens, have them vetted, place them in a foster home, and then set up an appointment for a prospective adopter to meet them. However, in the past, we have not done what is sometimes called “foster-to-adopt.” Even though we love it when a foster adopts their cat, foster-to-adopt with kittens can tie up the cats when they’re the most adoptable if a foster can’t quickly make up his or her mind.

But these are no ordinary times.

We had someone interested, we had cats at risk, and we decided to go ahead and see if the daughter would consider a foster-to-adopt. She did, and in a few days, it turned into a permanent home for the kittens.

And while we were thinking outside the litter box… what else could we do to continue to help at risk cats and maintain adoptions? With this particular foster-to-adopt, the kittens came to our vet first. We then arranged a contact-less hand off to the new foster. But what about kittens already in foster care?

We gave it a trial, all the while wondering if folks would really adopt a cat they hadn’t touched?

The answer came quickly, in the form of 33 adoptions in the first two weeks!

FFGW has always been primarily a foster-based rescue. During this time of crisis, we are doing these contactless adoptions only with fosters who are comfortable with the procedures. All of our fosters have committed to hold their cats until it is safe to resume in-person adoptions again. We have counseled fosters not to participate in adoptions if anyone in their household is sick, and to take the temperatures of all members of the household before any interaction with an adopter.

When we receive an inquiry about a cat on our website, or a general inquiry about available cats, we take an electronic application and process it. Once a prospective adopter is pre-approved, we set up video chats with the cats in the foster’s homes. The adopters are able to see the cats play and interact with their fosters, and can ask questions. If an adopter wishes to go ahead, we email a contract and electronically process the adoption fee. 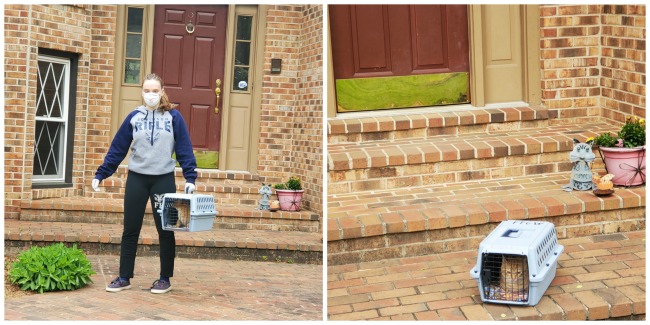 On adoption day, the adopter puts the contract and a sanitized empty carrier at the foster’s door and then steps back. The foster opens the door, brings in the carrier using gloves, and puts the cat in it. The foster wipes the carrier’s handle and any other touch points before putting the carrier back outside for the adopter to pick up. We recommend limiting interaction so that just one person in the foster family, and one person in the adoptive family, have even this minimal contact.

Is it possible that the video process works even better than an in-person adoption? For the right cat, it just may. Luna was a shy cat, one that couldn’t easily be brought to an adoption event, and one who was not likely to show her true, friendly self if a strange person in the form of a prospective adopter came to her foster’s house. It took an entire month for Lindsey, Luna’s foster, to coax Luna out from hiding when she first came to FFGW. “I knew she had to go with someone who wasn’t going to rush her and would give her space to settle,” said Lindsey. “I wrote a frank email about that.” Kathryn, who ended up adopting Luna, was the first person who didn’t say “thank but no thanks after reading Lindsey’s email.

“That was my first sign she was a good fit.” said Lindsey. “The second was how engaged she was over text. She asked a lot of good questions about Luna, wanting to learn everything I knew about her, and it showed me how serious she was. She was very open to the video call and wanted to do it as soon as possible. On the call she basically told me why she was a good fit for Luna…her house was quiet, she grew up with fosters so she knew sometimes that sometimes the bond takes time. She just said all the right things and she was so excited. I could see it all over her face. I had sent lots of pictures of Luna already but she just loved seeing her on camera. I just knew she was meant to be Luna’s person.” Indeed, Luna is thriving in  her new home.

Amber wasn’t worried about adopting a cat she hadn’t met in person, because she knew a lot about “Chicken” even before she “met” him. Corresponding with FFGW via email, Amber learned that Chicken had been in foster with other cats and dogs, which was important to Amber as she has a dog and another cat. Amber told us, “FFGW put me in contact with the foster mom and we set up a time to video meet and I got to speak with her and see Chicken over FaceTime. We spoke for a good 30 minutes, her letting me know how friendly he is and his personality traits. After the video call we both let FFGW know I wanted to move forward with adopting him.” Amber said that between the emails, and a long video “meet” she was not concerned about adopting a cat she hadn’t met in person.

After the video call, Amber set up a time with the foster to pick Chicken up. Adoption day was just two days after the call. Amber described the process: “When I got there, I dropped off carrier on the front step then got back in my car. Molly took it and put Chicken in it and then packed up all his toys and food for me as well and put that in a bag for me and then put him outside. I grabbed him and the bag and walked far enough away from the house so  Molly could come outside to say good luck and that she was happy for him. It was a very smooth process.” Amber reports that after getting home, Chicken hid under the bed for a day, but by the second day he was already exploring. Amber’s cat was scared of Chicken for a few days, but now they are friendly with each other. Amber has also given him a more dignified name… Ovi!

We long for the days when we can again snuggle kittens as we introduce them to prospective adopters, and watch their eyes light up as they touch warm fur for the first time. However, until then, we are extremely glad to have a great team of fosters and volunteers that are still saving the lives of shelter cats.

Harry Shubin is a patent attorney in Northern Virginia who has been active in cat rescue for most of his life. He is currently the newsletter editor and a member of the Board of Directors for Feline Foundation of Greater Washington. He shares his home with six cats. His wife Julie, daughter Rachel, and son Michael are also involved in cat rescue.

3 Comments on A Tail of Two Kitties: Contactless Cat Adoption During the Pandemic