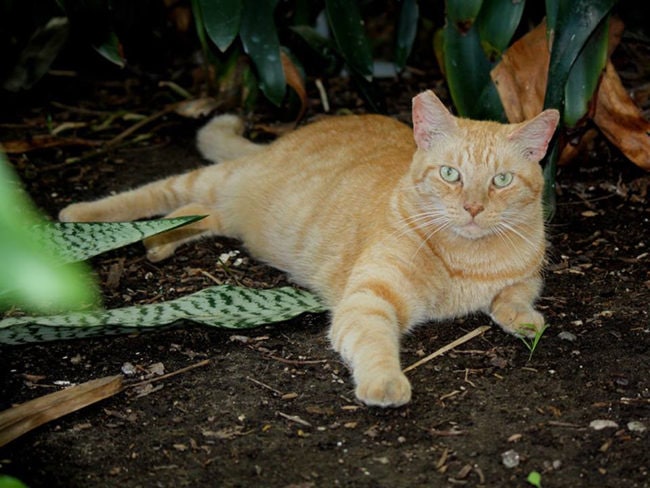 Cats, including community cats, are daily reminders of the simple joy animals bring into our lives. In times of crisis, caring for our cats gives us purpose when the rest of the world is beyond our power to control. This three-part series is based on my personal experience caring for the campus cats at San Diego State University.

When I was perusing the news with my morning coffee on December 31, 2019, a small headline about a novel coronavirus causing pneumonia caught my eye. “Welcome to 2020,” I thought at the time, but I assumed this would be a localized outbreak similar to SARS and MERS. By the middle of February, I had a sinking feeling. I had just returned from a visit with my sister, who works for the CDC. But even then, nobody knew what havoc this virus could cause and the ripple effects it continues to have as it is moving through our communities.

San Diego State University is an urban oasis; a compact but beautifully landscaped environment set on top of a mesa with expansive views east to the coastal range and west to the ocean. Over decades, the campus became a haven for feral or abandoned cats. There were ample rodent populations and overflowing dumpsters to maintain a large colony spread over the campus. The cats formed a close-knit community.

John Denune had been the champion and protector of the cats for over ten years. As a cat person, he spotted a mom cat leading her kittens to a dumpster and started feeding her. This grew into a full campaign to trap-neuter-release (TNR) as many of the cats as possible. Many kittens were adopted out, and slowly the population stabilized. “These cats are very important to me and I consider them my second cat family,” said John. Not only did John start feeding his colony, he raised awareness of their existence to facilities crews, who then started watching out for them. Students started following his Aztec Cats Facebook page, which now has over 800 followers. There is even a dedicated park bench in the garden at the center of campus with a plaque encouraging passersby to Take a Paws in your Day.

When John left SDSU, he organized Aztec Cats to maintain the daily feedings during the week. He still comes to campus every weekend to feed and play with his cats. ”Since I left SDSU, I really miss seeing them every day. In fact, before I accepted my new job, I made sure I had feeders lined up to take care of them during the week. I’m not sure I would have left if that were in question. I really look forward to seeing them every weekend. It’s a joy and never a burden.”

In a successful TNR program, the population should dwindle. At this point, there are only four remaining campus cats. Three live in tunnels beneath one building in the center of campus. BJ (daughter) is a loner, while Orion (son) and Darcy (mother) live together. Raven/Salem loves companionship and hangs out on the patio walkway frequented by everyone parking on the west side of campus. 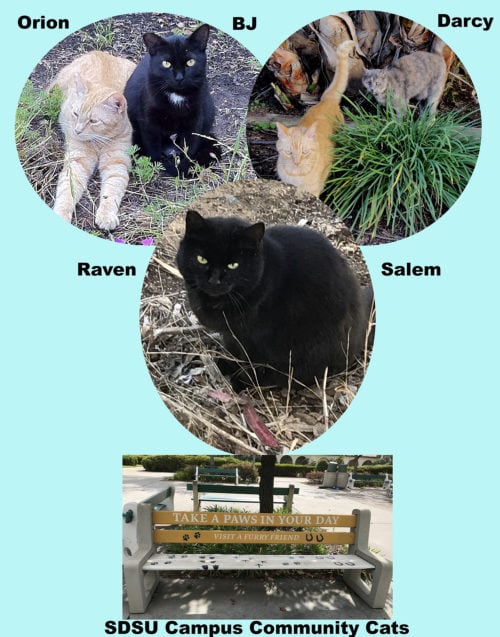 Since learning about Aztec Cats and joining the volunteers, I have changed my routine to include walking by their dens every day, talking to them and giving Raven daily tidbits. Visiting with the cats is the highlight of my day.

There are six regular Aztec Cat feeders, including myself. We each take one week of duty. Within this group, one is retired and two are retirement eligible. This never seemed to be an issue until now.

In January, I started watching increasingly alarming reports from China. Still, it seemed a long leap for the virus to reach extensively across the world anytime soon. By the middle of February, I started making plans to accelerate my students’ learning, but assumed we’d still have until mid-April or later, and that by then, things would be under control. Well, we all know differently now.

Being an obsessive planner, I try to look ahead and think about contingencies. But even I had never considered a plan encompassing a full campus-wide lockdown, working from home after being deemed nonessential, and having all this occur within the space of a few crazy days in mid-March. One day we had two weeks to prepare, the next day – poof we were gone. 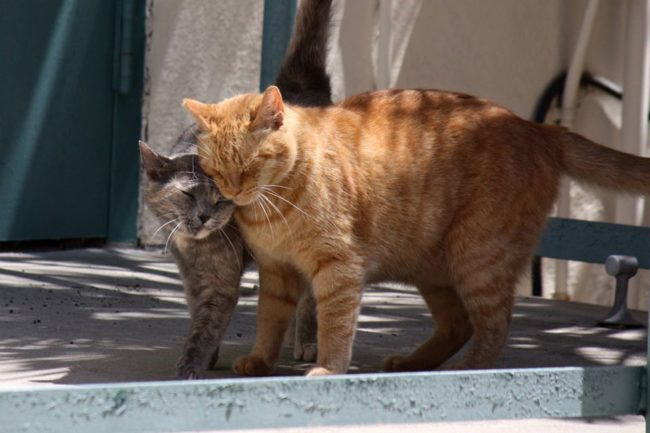 What does campus lockdown and shelter-in-place really mean?

I awoke in the middle of night on St. Patrick’s Day and foolishly looked at my email. No one should do this at 3AM, but with chaos raining down, I felt the need to stay connected. There was an urgent message from our SDSU President, sent at 2AM. I knew our situation had changed once again.

“Starting immediately all SDSU employees over 65 and with health related issues are not to report to campus. All others, except essential personnel, are to be moved to telework platforms by no later than Wednesday. If you want campus access, you will require permission.”

My heart started beating too fast to return to sleep. What about the cats! How will we work out feeding our cats? Who will feed them if they bar us? I knew I wouldn’t abandon the cats. Key issues needed to be addressed: regular campus access, backup feeders, parking restrictions, enough food cached, and assurances the cats would be protected. I spent the rest of my night planning.

As I expected, Raven’s usual feeder texted me at 7AM to remind me she is over 65. Could I take over her regular feedings? Already done, I responded.

Reading through the published guidelines for shelter-in-place, I saw that feeding pets is considered essential work. In retrospect, Alley Cat Allies has since confirmed this position on their web site, but I didn’t know this on that wild morning. I went to my department chair to find out the meaning of “requiring permission”. I was told that most likely no one would be allowed on campus. I tried to call Public Safety and no one answered the phones. So, I raced across campus to talk face-to-face to an officer.

“The campus isn’t gated. We can’t stop people from using the campus,” was the day officer’s statement. “You can still feed the cats.” To ensure we all would not be locked out or fined at some point, I emailed the officer with all the feeder names and received written assurances.

As a backup plan, because remember, I’m a planner, I enlisted the help of our Director of Animal Care. She is considered essential personnel and lives close to campus. We met. I walked her around the kitty areas and showed her the food cache. Fortunately, she is available as a real backup in emergencies and has joined in to help out during this crisis.

Then, I was given my telework orders. I had to gather up my most work materials and get out.

Rain, uncertainty and subdued cats:  the rest of the first week

COVID-19 affected our community cats almost immediately. The campus is typically bustling with activity and noise during the workweek. The cats sensed a dramatic change.

It was gloomy, dark and raining, hardly a typical San Diego day and the forecast predicted occasional heavy bouts of rain. One of the regular feeders was still on campus for BJ, Orion and Darcy and could step out during dry spells. I needed to feed Raven, so I timed my visit to campus as best as I could to avoid heavy rain. I was glad there was no issue getting on campus.

I cut an industrial trash bag to use as a table tent to keep her food and water protected. She ate, purred and generally tried to keep me around. She was already missing all the students who talked to her each day. She knew something had radically changed.

By Thursday, the campus became downright eerie. Summers are typically quiet, but this atmosphere was entirely different. The only sounds were those of birds and leaf blowers. It rained all night, but the forecast was for morning clearing and some showers through the day. I took over all cats for two days, until the weekend.

Overnight someone had made our little Raven a “house” and put it in her usual hiding spot. Our campus cats are well loved by the whole SDSU community. I don’t know if she used it or not, but I liked the idea with all the rain. As soon as I opened a can of food, she appeared. I didn’t want to hang out for too long in case more rain moved in, so I left her eating and moved on to BJ, Orion and Darcy. On my way back down, I stopped to pick up the bowl and give Raven some more people time. She hadn’t finished her meal, and she clearly didn’t want me to leave. 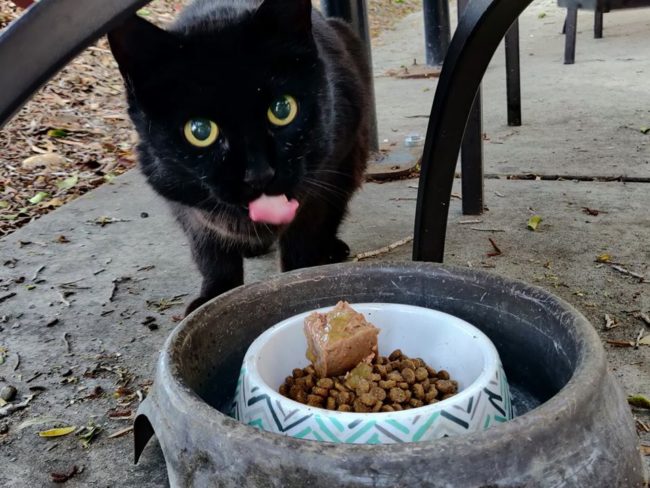 By Friday, even Orion and Darcy came out and watched me closely as I filled their bowls. They didn’t even flinch as I put them down. Orion started eating as I finished preparing Darcy’s bowl. They seemed happy to interact with someone. The blanket of silence around them must have been beyond their understanding and the swiftness of the change shocking. As much as this crisis affected us with the abrupt rearrangements of our lives, it also created a void in these cats’ routines, throwing them into the same chaotic state humans were dealing with.

Adjusting to the new normal

So far, we had been able to keep up a normal schedule even without our full complement of feeders.

Ingrid R. Niesman MS PhD is the Director of the SDSU Electron Microscope Imaging Facility at San Diego State University. She graduated from Utah State University and received her MS from the University of Illinois-Urbana-Champaign. After 30 years of technical electron microscopy, cell biology, neuroscience and infectious disease research, Dr. Niesman completed her PhD in the UK at the University of Sunderland. Her work experience includes time at LSU Medical School, Washington University, UAMS in Little Rock, UCSD, TSRI and a postdoctoral year at CALIBR in La Jolla, CA. She has worked for at least two National Academy of Science members and is credited with over 50 publications. She can be reached at ingridniesman@yahoo.com

3 Comments on Feeding Community Campus Cats During a Pandemic – Part One: The Mad Dash