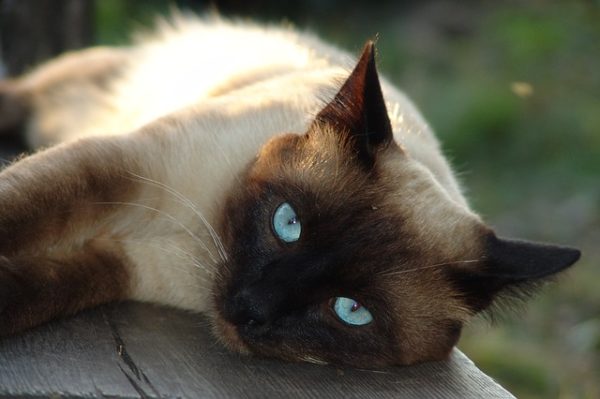 Anyone who has lost a beloved relative or cherished pet to dementia knows the tremendous personal cost. My phone and computer screens still display 19-year-old Mr. Spock, although he left us in October of 2013. His last years were marked with curious Parkinson’s disease-like symptoms, most notably tremors, loss of appetite and a pronounced head tilt. However, he maintained his dignity and profound loving nature to the end. It was the beginning of my personal journey to understand feline cognitive dysfunction syndrome (CDS), although I had no concept that such a clinical condition even existed.

When does curiosity spur action?

It takes a big leap of faith and significant creativity to start working on a novel scientific idea from scratch. I began by designing experiments to understand why my Siamese cat seemed predisposed to neurodegeneration. I have no background in feline health or medicine. I do, however, have a lengthy career as a cell biologist and neuroscientist. I observed a phenomenon and did my homework. In previous posts, I have described how a single mutated gene, tyrosinase, confers (or as I like to tell students – confurs) the beautiful coats of purebred Siamese cats. Fur and brains seem disconnected. Yet, embryonically, the cells that generate skin pigments and certain brains cells share identical lineage. If tyrosinase doesn’t work in warm areas of Siamese skin, then the protein will also not function in brain cells. Similar mutations in human tyrosinase are known to disturb normal cell physiology but this mechanism has not been studied for the Siamese mutation. YET! 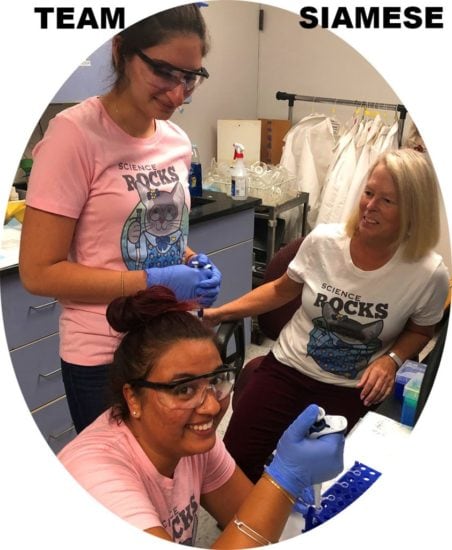 Putting my skill set to work

What my team and I have done is to use a combination of molecular biology and light microscopy to figure out if Siamese tyrosinase is potentially harmful when expressed in cells that normally wouldn’t produce this protein. We have spent the past 18 months preparing to test our cloned DNA in the infamous human cell line, HeLa. We had the normal and Siamese version of tyrosinase synthesized and then designed circular DNA snippets that add a green tag (GFP) to either the beginning of tyrosinase protein or the end of the protein. Using these pieces of DNA as templates, HeLa cells make feline protein that we can see microscopically or biochemically. These are early days, but our cell-based system is working as we expect. We have achieved robust and reproducible protein expression. More importantly, we have also found evidence that Siamese tyrosinase is degraded at a faster rate than normal feline tyrosinase. When we treat tyrosinase-expressing cells with chemicals that block this degradation, we find large clumps of protein in our Siamese tyrosinase expressing cells. Aggregated proteins clog normal cell functions and can lead to cell death if the biochemical equivalents of waste disposal are overwhelmed. Much confirmatory work is required before we can publish these findings but they support our original suggestion that Siamese tyrosinase is toxic. 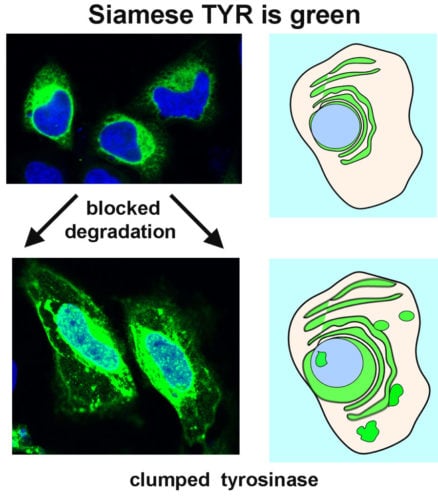 From cells to cats to people

Developing disease therapies is a laborious and expensive undertaking. Finding the precise compound to alter disease progression or improve symptoms starts by creating models of the disease in cells. Currently, my team and I are developing cells that mimic what happens to Siamese neurons if their mutant protein is expressed and causes damage. Logically, our next steps would be to look for drugs that could ease or stop the damage from occurring. All this work is before we even think about a whole animal. Although it seems like a shot in the dark, we have already mapped out several cellular networks we believe will make good therapeutic targets. The quest for the elusive perfect animal model of neurodegeneration is heating up, as the rise of cognitive dementia in humans and cats is exploding. This is where we are in our journey of discovery towards this goal.

4 Comments on From Cells to Siamese: Advancing Our Understanding of Cognitive Dysfunction