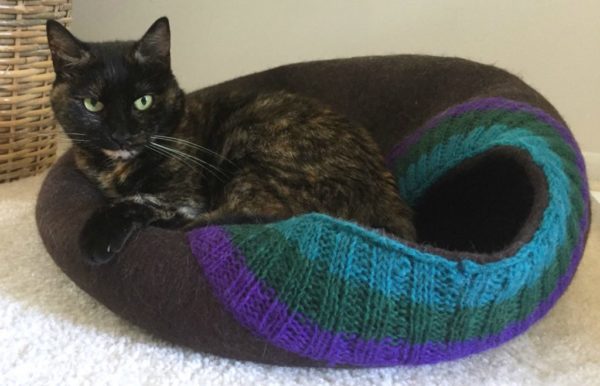 I never wanted to have to write this post.

Chronic Kidney Disease, also known as Chronic Renal Failure (CRF) is a common condition in cats. It is the result of a gradual decrease in kidney function. I’ve been fortunate that I’ve never had to deal with this disease with any of my previous cats.

Until now. Last week, Ruby was diagnosed with kidney disease, and sadly, it’s already in the advanced stages. I’m still trying to wrap my mind around how my little girl could go from seemingly healthy to terminally ill in less than two months. It just goes to show how good cats are at hiding signs of illness, and how even an experienced cat parent like me can miss the signs (or, admittedly, be in a bit of denial about the signs).

At her most recent annual check up in August, everything looked good. Then, starting the beginning of September, her appetite started to drop off. Since this had been a previous occasional pattern with her, I chalked it up to “fussy eating,” even though I could hear my veterinarian’s voice in my head from when I had mentioned Ruby’s finickiness in the past. “There’s no such thing as a fussy eater,” says Dr. Andrea Tasi, a holistic veterinarian and owner of Just Cats, Naturally. “A healthy cat will eat her food with relish. There’s always a reason when a cat becomes finicky.” Ruby was eating, she just wasn’t finishing her meals.

Toward the end of September, I noticed her drinking more water. Before that, I’d rarely seen Ruby drink from the bowl. The girls both eat raw and the occasional canned food, and I mix additional water in with their meals, so she was getting plenty of moisture from her meals. Now, apparently, that wasn’t enough. Something had changed.

Two weeks ago, Dr. Tasi came to my house to examine Ruby again. This time, one of her kidneys was slightly enlarged. That was not the case in August. We ran bloodwork to determine whether her kidney function was compromised, and if so, how much.

The next step to further clarify what was going on with her would be an ultrasound. The most likely causes for an enlarged kidney are a benign cyst, an infection, inflammation, or cancer.

I chose to decline, with the full support of Dr. Tasi. I previously wrote about the topic of diagnostic testing, and how one of the most important questions to ask yourself before agreeing to any test is “what will you do with the information from the test?”  In Ruby’s case, that meant: if there’s a growth or cyst on her kidney, it would most likely require surgical removal. If it looks like cancer, it would require a biopsy and possibly surgery and/or chemotherapy. And while surgery and chemo might be right for another cat, I know in my heart that they’re not right for Ruby.

My heart felt like it was shattering into a million pieces when Dr. Tasi called with the bloodwork results. We expected to see elevated kidney values, given her symptoms, but we didn’t expect them to be as high as they were. I thought I had prepared myself, but while listening to Dr. Tasi, I broke down in tears. Ruby is only nine years old! The thought of losing my little girl, and losing her sooner rather than later, was incomprehensible.

Conventional treatment for kidney failure typically starts with rehydration via IV fluids, which would require hospitalization for at least two or three days. And while this may be right for another cat, I know in my heart that it wouldn’t be right for Ruby.

Treat the patient, not the lab values.

I am blessed that in Dr. Tasi, I have a vet who treats the patient, not the lab values. She is also one of my closest friends, so she not only knows Ruby, she also knows me really well. She understands the unique bond between me and Ruby. She has been a tremendous support both in treating Ruby holistically, and in supporting my decision to forego aggressive diagnostics and treatment, and to simply keep her happy and comfortable for as long as we can. Until we can’t anymore. And when that time comes, she will be gently eased out of this life, in my arms, in the comfort of her familiar home. 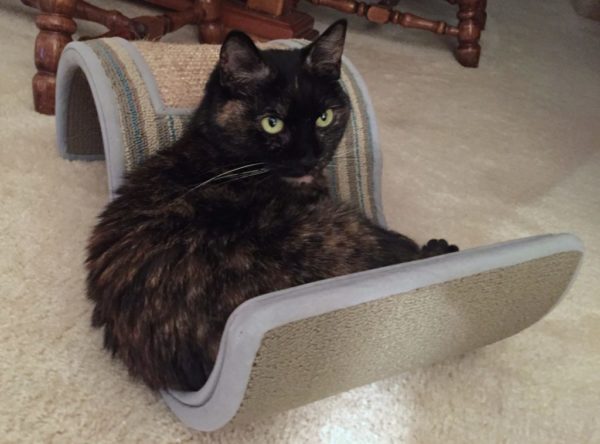 As of this writing, Ruby is feeling good. She’s still playful, she still cuddles with me, and she still aggravates her big sister. She’s still eating pretty well. I’m feeding multiple small meals, stretched out over a period of two or three hours, which is challenging, because I can’t leave the food down, or Allegra will eat it. But we’re working it out. Ruby is getting subcutaneous fluids once a day. I’m adding a phosphorus binder to her meals. I’m using the Assisi Loop. And of course, she is getting daily Reiki treatments from me.

Ruby doesn’t care that her lab values are a mess. She doesn’t think about how much time she might have left. All she wants is to be happy and loved. And that’s what she’s going to get, for as long as I can give it to her. I have little doubt that she will let me know when she’s done.

And while I have moments of profound sadness, and have shed more tears in the last few days than I have in a long time, I’m doing my best to focus on living in the moment and treasuring every minute I have with my baby girl.

Allegra has been a trouper through all of this. As those of you with multiple cats know, when one is sick, that cat tends to get all the attention, and the others take a little bit of a back seat. She clearly knows something is wrong with Ruby, and I think in her own way, she is holding the space for Ruby. Somehow, the three of us will get through this.

I realize that the decisions I’m making about Ruby’s treatment may not be the decisions you might make for your cats in a similar situation. I ask that you respect my choices.  We are in the best possible hands with Dr. Tasi. We have explored all treatment options, and we’ve chosen the ones that are best for Ruby, for Allegra, and for me.

To me, the most important thing is to not just take care of Ruby’s medical needs, but to honor her unique spirit in every decision I make about her care.

122 Comments on When Kidney Failure Hits Close to Home