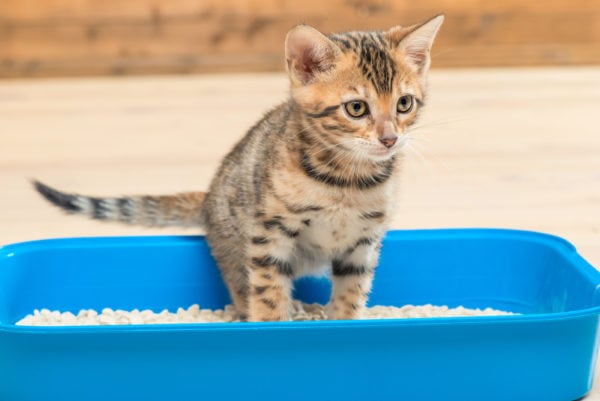 Dealing with a cat who pees outside the litter box is one of the most frustrating issues cat parents may be faced with. We’ve previously addressed the various reasons why cats eliminate outside the litter box, including litter box aversion, urine marking, hormonal problems, and medical issues, here. Today, I’d like to address a less common, but nonetheless frustrating version of litter box behavior: cats who pee standing up, or vertical pee-ers, as I like to call them.

The difference between vertical peeing and spraying

Spraying is not to be confused with vertical peeing. Some cats, both male or female, will urinate inside the litter box either standing up, or they start urinating in a squatting position and then gradually stand up as they finish. And yes, female cats do this, too – we’ve got our own resident pee-er with Ruby.

Spraying, on the other hand, is a territorial behavior. Cats who spray stand upright and deposit a small amount of urine on vertical surfaces.  Even though both male and female cats spray, the behavior is mostly seen in unneutered male cats, and occurs more often in multicat households, although even a single cat may spray.

Anatomy of a vertical pee-er

After I adopted Ruby, I couldn’t figure out why there was frequently a small amount of urine just behind the litter box. Since the box is placed in a corner against the wall, I knew that she couldn’t possibly have squatted back there, so how did the urine end up outside the box? After a couple of days of being puzzled, I finally caught her in the act.

She started out squatting and peeing horizontally, but slowly and gradually raised and wiggled her rear end throughout the duration of her peeing. A normal size litter box wasn’t high enough to contain the urine.

And so the search for the perfect litter box began.

The search for the perfect litter box

I don’t like covered boxes. Most cats don’t like them either. They don’t like not being able to see while they’re doing their business. If covered boxes aren’t scooped immediately after the cat deposits something in them, the stench becomes concentrated inside the box (think of a covered litter box as the feline equivalent to a Port-a-Potty). I also like to be able to see what my cats are doing when they’re using the box. Some health problems first manifest through unusual behavior in the litter box, such as straining.

Several friends suggested that I get a large Rubbermaid or clear plastic storage container with high sides and cut an opening on one side that’s low enough so the cats can easily get in and out. This can work well, but it also looks pretty ugly. While my litter boxes aren’t the center of my decor, they are in pretty visible spots (I don’t believe in hiding them in a dark corner), so I wanted something that was at least somewhat pleasing to the eye.

There are a number of high-sided, uncovered litter boxes on the market, and I tried most of them. Most worked 90% of the time. The other 10% of the time, I dealt with cleaning up urine that had spilled over the edges of the box. Both of my litter boxes sit on carpet, so this was not fun. Thankfully, the Anti-Icky Poo enzyme based cleaner I’ve been using for years completely eliminates urine stains and odors, even on (white!) carpet. For extra insurance, I put a Drymate Litter Mat underneath the boxes. Now all I had to do when we had spillage was throw the mat in the washer, but I was still nervous about some urine making it past the mat onto the carpet.

Thankfully, I discovered the NVR Miss litter box a year or so after I adopted Ruby. At the time, it was the highest box on the market, and I think it still is.

This box is everything a litter box should be. It’s roomy. It has a strategically positioned cat-friendly entrance that makes it easy even for senior cats to get in and out of the box. The clever design (a slight protrusion across from the entrance) provides a cue for cats to align themselves lengthwise, so you won’t have to worry about urine going outside the box at the low entrance. The sides are high enough even for Miss Ruby and her vertical peeing gyrations.

While I was more concerned about urine spillage, another nice benefit of the high sides is that it also keeps litter contained inside the box. Ruby and Allegra are litter kickers and they both get pretty energetic when it comes to covering what they produce. This box has kept that issue to a minimum. Another plus is that the smooth finish allows litter clumps to easily release from the box’s walls – something that has not been the case with some of the other boxes, where parts of the clumps would stick to the box’s sides and then break into small pieces.

Litter box issues should never be taken lightly, but if you’ve ruled out medical and behavioral issues, you may just have a vertical pee-er!

40 Comments on Is Your Cat a Vertical Pee-er?