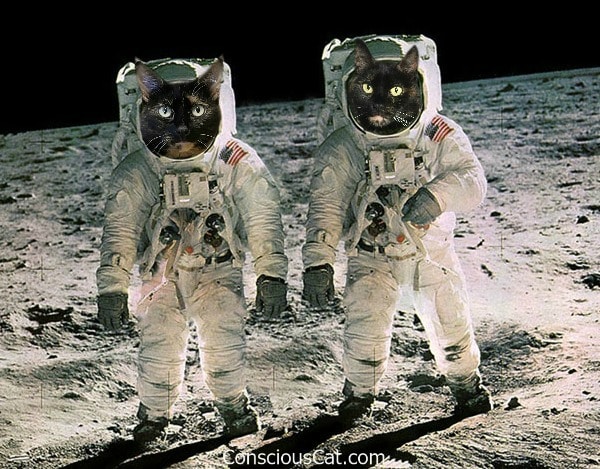 We’re skipping our regular Mews and Nips feature this week because we feel that today is a pretty momentous day: the 50th anniversary of the first man walking on the moon. What does this have to do with cats? Absolutely nothing. Or does it? It appears that my two intrepid explorers think that maybe it should have!

Neil Armstrong’s first step on the moon’s surface was an existential moment, experienced by a global television audience of 600 million people. If you were one of them, you will always remember where you were at that moment in history. It was both a collective celebration of arguably one of humanity’s greatest achievements, and a contemplation of the vastness of the universe and our place in it. And perhaps, the universe just got a little bit smaller that day.

The moon landing took place at 20:17 UTC. As a young child in Germany, that was way past my bedtime. I remember being fascinated with the idea of space travel, and everything surrounding the Apollo missions. I even had a scrap book where I collected newspaper and magazine articles about anything related to space.

On July 20, 1969, I remember my parents waking me up. We didn’t even have a television set at the time, so we went to the neighbors’ apartment across the hall. They had a small, black and white TV set. That in itself was pretty cool: visiting the neighbors, in my jammies, in the middle of the night! I only have a vague memory of watching the actual landing, and Neil Armstrong’s first step, but I have a vivid memory of the adults in the room being super excited, and of someone bursting into tears.

It’s probably hard for people born after 1969, or those who were too young then to remember, to appreciate just how momentous this event was. Keep in mind that this was before the days of computers, cell phones and a TV in every home, so people gathered with friends and neighbors, like we did, or in public places, to experience the moment. It was a moment of shared wonder, and I don’t think there has been anything like it since.

It  was a moment that reminded humanity that we are a single species in an awe-inspiring universe.

Many years later, in 1982, two years before I moved to the Washington, DC area, I visited the Apollo 11 exhibit at the Smithsonian’s Air and Space Museum. I was awestruck at seeing the actual Apollo 11 capsule, and all the artifacts from the mission.

Today, I find myself reflecting not just on what this moment might have meant for humanity, but I also find myself looking back to that little girl who was fascinated by space flight. Perhaps, it’s time to find a way to recapture her sense of awe and wonder.