We all know cats are creatures of habit. They tend to follow the same routine day after day, and they don’t much appreciate a disruption of that routine. If you’ve followed me for a while, you also know how much Allegra and Ruby love their Jackson Galaxy Donut Beds – in fact, they love them so much that I had to get a second one to keep the peace!

After I got the second bed, the girls pretty much each claimed their own bed. Allegra preferred the one up against the wall next to the bookshelf, Ruby liked the one in the corner between bookshelf and closet. If Allegra dared check out Ruby’s bed, Ruby quickly chased her off. 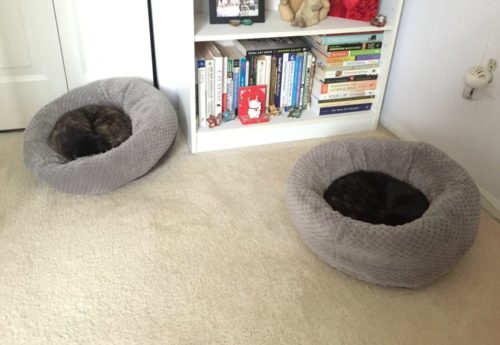 Most days, they settle into their beds for a long morning nap after they’ve had their breakfast.

This is the scene that often greets me when I return from my late morning walk: 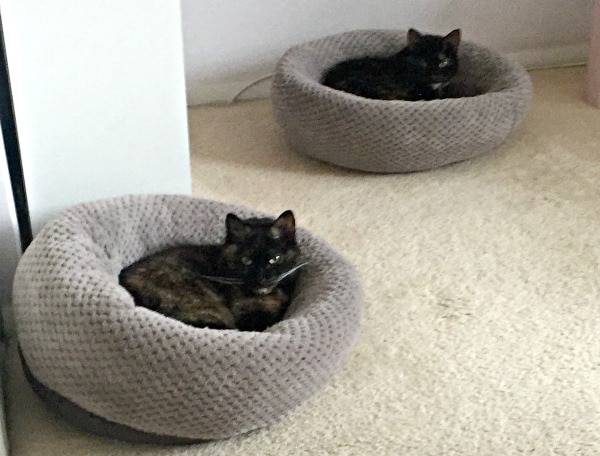 Seconds later, they curl back up and return to their naps.

After I returned from a brief trip last month, something had changed. All of a sudden, Allegra slept in Ruby’s bed. Oddly enough, Ruby didn’t seem to be bothered by it, but she also didn’t sleep in the now vacant bed that used to be Allegra’s. It took some coaxing on my part to convince her that she could take over the other bed. Eventually, she decided that it was fine. After a few days, the switched beds became the new normal. 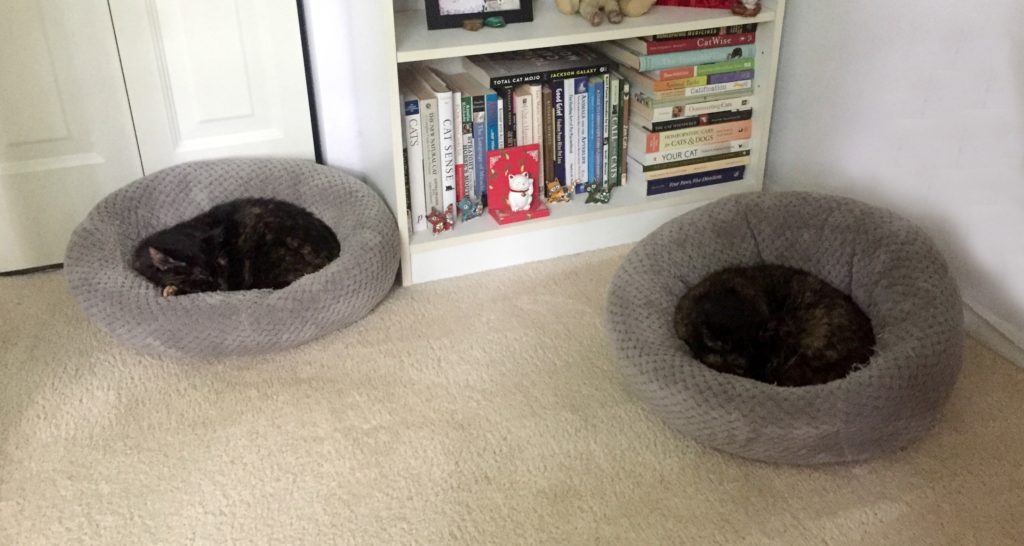 I really wanted to know why the girls switched beds, but they’re not talking. I even switched the actual beds, to see whether the new arrangement was location-based or had something to do with the beds themselves. It appears to be about location, because they did not return to their original beds even after I switched them.

I finally gave up trying to understand why they did it.

Ruby (whispering): I know! Isn’t it fun? She thinks she knows everything about cats, and yet, she can’t figure out that we were just  having fun with her. Heeheehee!

Ruby (whispering): Do you think mom is mad at us?

Allegra (whispering): Of course not, Ruby. Mom would never get mad at us.

Ingrid: Girls? What are you whispering about?

Ruby: We were just talking about how much we love you, Mom!

The Jackson Galaxy Donut Cat Bed is available from Petmate.

Exclusive 20% Discount on all Petmate Products
for Conscious Cat Readers!

Use code HAPPYCAT at checkout

FTC Disclosure: The Conscious Cat is an affiliate partner of Petmate. This means that if you decide to purchase through any of our links, we get a small commission. We only spread the word about products and services we’ve either used or would use ourselves.