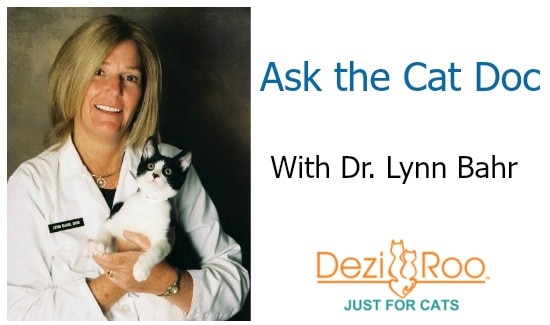 Welcome to our regular “Ask the Cat Doc With Dr. Lynn Bahr” segment! Once a month, Dr. Bahr answers as many of your questions as she can, and you can leave new questions for her in a comment.

Dr. Bahr graduated from the University of Georgia College of Veterinary Medicine in 1991. Unlike most veterinarians, she did not grow up knowing that she would become a veterinarian. “It was a cat who got me interested in the practice and I am forever grateful to him,” said Dr. Bahr. Over the course of her veterinary career, Dr. Bahr found that the lifestyle of cats has changed dramatically. As the lifestyle of cats has changed, so did Dr. Bahr’s client education. In addition to finding medical solutions, she also encourages owners to enrich their home environments so that their cats can live long, happy, and healthy lives.

This new understanding led Dr. Bahr to combine her passion for strengthening the human-animal bond with her veterinary background and knowledge of what animals need and want to start her own solution-based cat product company, Dezi & Roo, inspired by two cats of the same names.

For more information about Dezi & Roo and their unique and innovative cat toys, please visit Dezi and Roo on Etsy.

Do you have a question for Dr. Bahr?
Leave it in a comment and she’ll answer it next month!

My 4 yr old Ocicat male has had his 3rd eyelid up more on than off for several months now . My vet could not determine a reason for this. He was given a shot of Convenia, he ran a low grade temperature and thought he might have been constipated from having a mouse, he does go out as we have a farm, his outings are brief and loosely supervised. We have had a neighbor male spraying from time to time and I have been using the calming spray inside and out. 3 months later the eyelids are still up more than down. Your thoughts would be greatly appreciated. – Marie Pyle

Thank you for reaching out to ask why your cat’s third eyelids might be elevated. You were wise to take your kitty to a veterinarian and I am glad to know nothing serious was found. While many illnesses can cause the third eyelid to show, it is more likely that your cat is dealing with Haws Syndrome, since he is otherwise feeling well.

No one really knows what causes Haws Syndrome, but it is believed to be related to an internal parasite infection like tapeworms. Symptoms may include elevation of the nictating membrane (third eyelid), diarrhea, occasional low grade fever, or reduced appetite. However, in most instances, all we really notice is the cross-eyed look associated with the third eyelid being visible. Fortunately, this condition typically resolves on its own given some time. However, it is a good idea to have your Ocicat treated with a broad spectrum dewormer to eliminate the possibility he is dealing with a tapeworm infection. Anytime I see this condition in my patients this is the course of treatment I recommend.

If for any reason your boy is not acting normally, losing weight, or has any other symptoms besides his third eyelids being elevated, please take him back to your vet for a recheck. Otherwise, you should expect this condition to resolve on its own soon.

Hello, my cat came out of general anaesthetic ‘flat’ 2-3 years ago, and has never recovered. Her walking, claw retraction, and orientation are all affected. She has now stopped going outside to toilet and uses a litter tray. Is this likely to continue to deteriorate? What can we do? – Janice Davison

I am so sorry to hear about your kitty’s condition. Unfortunately, without more medical information I am unable to access whether or not this condition will continue to deteriorate. However, I would recommend you have your cat seen by a veterinary neurologist in the hopes that a proper diagnosis is made and a treatment plan formulated. Without a neurologic exam, anyone would be guessing at her prognosis. There might be the possibility that she could even improve rather than deteriorate but you will need to seek the help of a veterinary neurologist to find that out. I hope that is the case. Good luck.

Hi can you give me some advice please? My cat keeps getting sore eyes please can you help Thank you. – Eunice Kane

What is going on with your cat’s eyes? Your question is too vague for me to answer but I would love to help you out. Let me know what you mean by “sore”, how long the condition has been present, when did it start and has it changed and some details about your cat like age, lifestyle, and medical history. The more details I have the easier it is for me to assist you. Purrs and thanks.

*FTC Disclosure: The Conscious Cat is a participant in Etsy’s affiliate program. This means that if you decide to purchase through any of our links, we get a small commission. We only spread the word about products and services we’ve either used or would use ourselves.