Working at our rescue’s booth at a recent cat convention, selling items to raise money for our foster cats, I witnessed (or, rather, was privy to) a very special moment: the memory of a woman’s soul cat suddenly came rushing back to her.

At fundraisers and adoption events, people love to tell us about their cats, both past and present. Sometimes there are a few tears remembering a beloved kitty, and our eyes often leak right along with theirs as they tell us their stories. Somehow, though, the encounter with Lily’s human was different, and one I will never forget.

I came to learn that her Lily, a black cat with a little white spot on her chest and an ear crumbled by hematoma surgery, passed away some years ago. Lily’s memory, or perhaps something more, was triggered by a catnip toy we were selling: a cheeky, cigar-shaped toy loaded with high-test nip – the good stuff.

As I noticed the woman touching the basket containing the toy cigars, I asked if I could help. She met my eyes with tears in hers and remained silent.

Several minutes passed before she could start telling me about Lily, the love of her life, her soul cat. Lily had been the proud owner of one of the exact catnip cigars we were selling. She slept with it, carrying it to bed next to her human every night. It was ragged and smelled more like kitty spit than catnip, but Lily loved it, keeping it close until the end of her life.

In Lily’s memory, her human has kept that old tattered toy on her bed, in Lily’s favorite pillowcase, ever since.The woman said she had not seen these toys for sale anywhere since the day she bought Lily her cherished toy years ago. When she saw them on our table, she was instantly swept back in time, as if Lily’s spirit was tugging at her right in the middle of that noisy, crowded convention floor.

For a moment, it was just her and Lily and her favorite toy, in a time and space that was just for them.

After telling me Lily’s story, Lily’s human went on to tell me she had gone to a shelter a couple of years ago, still mourning Lily, and not intending to adopt, only to look.

“As if that every works out,” she said with a smile.”

Sure enough, a little black cat with a white dot on her chest worked hard to catch her attention. The kitty’s name was Pearl. As she looked more closely, she noticed Pearl’s ear had been tipped (most likely done as part of a TNR program) – the same ear that Lily had crumpled by surgery. That sealed the deal! 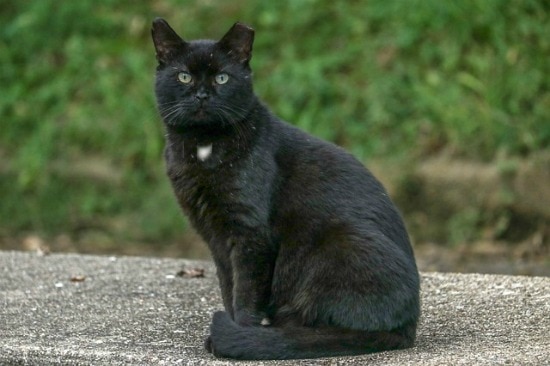 Clearly, Lily had decided her human had been missing her long enough and led her to Pearl. Pearl quickly settled right into her new home and is loving life with her new family, and they adore her! She is, of course, different from Lily, despite their similar appearance, and is carving out her own piece of her human’s heart.

And now, Pearl has her very own, brand new, cheeky catnip cigar.

Rita Atkins volunteers with Only Maine Coon Rescue.  The group specializes in the Maine Coon Cat breed and rescues Maine Coon Cat / Kitten mixes from shelters and unwanted situations. All of their cats are lovingly cared for in foster homes until they are adopted.

Images are stock images via Pixabay

12 Comments on Lily and Pearl: Passing the Cigar