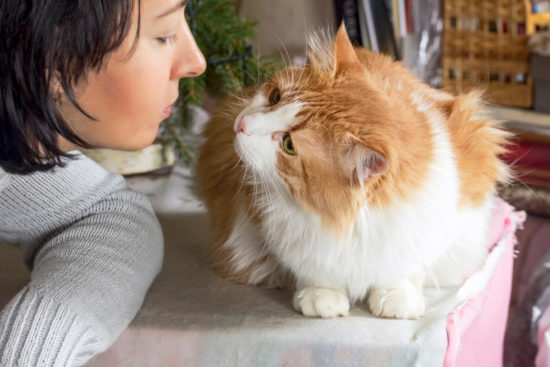 Numerous studies have shown that parents’ personalities influence their children, but until recently, nobody had looked at whether human personality impacts pets. A study conducted at the University of Lincoln and Nottingham Trent University investigated the relationship between the different personalities of cat parents and the behavior and well-being of their feline family members.

The link between human personality and feline well-being

Researchers surveyed 3,331 cat owners in the UK. They asked the cat guardians about their own personality traits and about the health, well-being and behaviors of their cats. The results: cats tend to display characteristics similar to the personality traits of the humans they live with.

The researchers also found that the number of cats someone owned was related to personality. People with multiple cats tended to be more introverted, less agreeable, and less neurotic, but they also tended to be more conscientious.

Take the study results with a grain of salt

While I don’t doubt that our personality, and even more importantly, our energy, has a direct impact on our cats’ health and behavior, there are some inherent limitations to this study. For starters, the study didn’t look at why there was a link between human personality and feline well-being. And while they surveyed a large number of people, they only surveyed five personality traits, and that’s certainly not enough information to determine just how much a cat parent’s personality influences a cat’s well-being.

What I find far more interesting is that this study does highlight how sensitive cats are to their environment. Numerous studies have shown that human stress has a direct impact on feline health. I certainly notice a difference in Allegra and Ruby on days when I’m rushed or stressed about something. They tend to be less relaxed, and may even act out a little. Conversely, they calm down much more quickly after a stressful event if I remain calm and unaffected.

And since I believe that cats come into our lives to teach us, perhaps, this is yet another way they try to help us become better humans. After all, what better motivation to change an aspect of your personality you may not be entirely happy with than knowing that it will improve your cat’s well-being?

Do you feel that your cats reflect your personality traits?

You can read the full study results here.

8 Comments on Does Your Cat Reflect Your Personality?