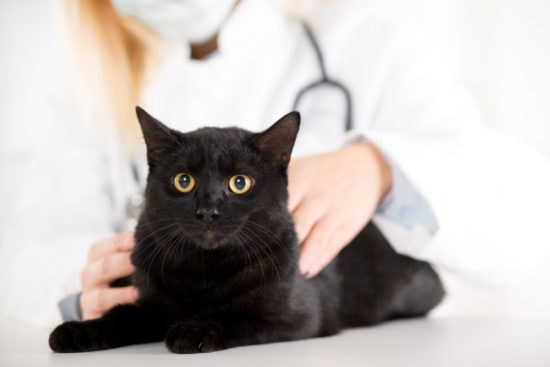 In the past, feline distemper, also known as panleukopenia or FPV, was the leading cause of death in cats. The disease is relatively rare today, mostly thanks to effective vaccines. The feline distemper vaccine is considered a core vaccine, and is commonly administered in a combination vaccine that protects against FPV, feline herpes virus and feline calici virus.

What is feline distemper?

Feline distemper or panleukopenia is a highly contagious viral disease caused by the feline parvovirus. Kittens are most severely affected by the virus. The virus does not infect people. Because the panleukopenia virus is everywhere in the environment, virtually all kittens and cats are exposed to the virus at some point in their lives. The virus is shed in cats’ urine, stool and nasal secretions. While cats of any age may be infected with the feline parvovirus that causes distemper, young kittens, sick cats, and unvaccinated cats are most susceptible. It is most commonly seen in cats 3-5 months of age.

How is feline distemper prevented?

Cats who survive an infection develop immunity that likely protects them for the rest of their lives. Mild cases of distemper that go unnoticed will also produce immunity against future infection.

Kittens may receive temporary “passive” immunity through the transfer of antibodies in the colostrum (the first secretions from the mother’s mammary glands after giving birth.) How long this protection lasts depends on the levels of protective antibodies produced by the mother. It rarely lasts longer than 12 weeks.

Vaccination offers the best protection against distemper infection. The American Association of Feline Practitioners Vaccination Guidelines recommend vaccinating young kittens as early as six weeks of age, with follow up vaccinations given every 3 to 4 weeks until the kittens are around 16 weeks of age. Adult cats who have never been vaccinated or whose vaccination status is unknown should receive two vaccinations, 3 to 4 weeks apart.

The recommendation for booster vaccines is a single dose is given one year following the last dose of the initial series, then no more frequently than every 3 years.

How frequent is too frequent when it comes to distemper vaccination?

While there is no question that vaccines protect against disease, they also present considerable risk. Vaccines are implicated in triggering various immune-mediated and other chronic disorders (vaccinosis). Vaccines are also implicated in the high incidence of vaccine-induced sarcomas in cats. The incidence of these tumors ranges from 1 in 1000 to 1 in 10,000 cats. They can develop as quickly as 4 weeks or as late as 10 years post vaccination.

The study looked at 112 healthy cats. They were vaccinated with a combination distemper, feline herpesvirus and feline calici virus vaccine. Antibodies against distemper were measured before vaccination, on day 7 and day 28.

Minimize the risk of unnecessary vaccines

Titer testing can be an alternative to ensure that your cat is protected without introducing unnecessary vaccines. A titer test is a blood test which measures the presence and level of antibodies for a particular infectious agent in the cat’s blood. These antibodies reflect the combination of potential natural exposure and vaccination. Antibodies are created when the immune system responds to the antigens in the body.

Dr. Tasi doesn’t recommend titers, since they only measure antibodies. “Titers are limited in what they can tell us about immunity,” says Dr. Tasi. “They only measure antibodies and do not take cell-mediated immunity into account.” Cell-mediated immunity is the “first line of defense” of our immune system, and equally as important as antibodies. It relies on the body’s own cells and involves the activation of phagocytes, antigen-specific cytotoxic T-lymphocytes (T-cells,) and the release of various cytokines in response to an antigen. “I’ve learned to trust the adult immune system of a healthy cat,” adds Dr. Tasi.

The full study was published in the December issue of the Journal of Feline Medicine and Surgery.

12 Comments on Feline Distemper Vaccination: Will Your Adult Cat Benefit from Re-Vaccination?