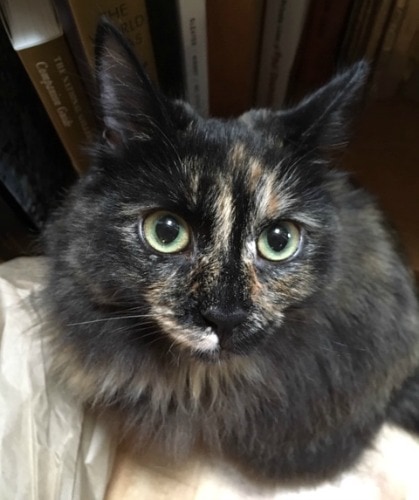 Thisbe is annoyed. And who can blame her? Although this lovely tortie lady joined our household in April, she will not be featured in my new A Spell of Murder, which kicks off my “witch cats of Cambridge” series on Dec. 11. In fact, among the multiple felines at the heart of my magical new cozy, none is tortoiseshell.

Being a tortie, Thisbe is both preternaturally intelligent and responsive, and she is well aware of the slight being done her. On seeing the reviewer’s advanced reading copy, which features a calico on the cover, she took to her divan, no doubt to mull retribution, even as I wait for my finished copies. 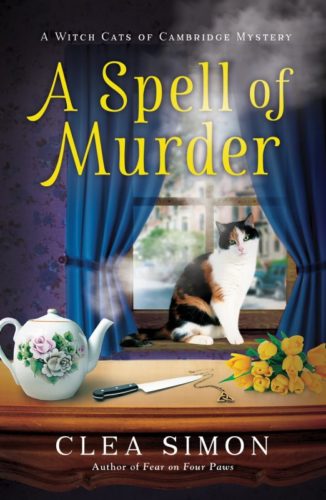 The cats of A Spell of Murder

That calico, Clara, is one of three cats at the heart of my new mystery. Littermates, descendants of a powerful line of witch cats, Clara and her sisters Laurel and Harriet co-habit with Becca, a young woman who, in her human innocence, believes she may just be a witch. It’s all a misunderstanding, of course. The result of a careless bit of conjuring by Harriet, who summoned a pillow for her own comfort, just as Becca was trying out a spell. But of course, humans being what they are, this misunderstanding lands Becca in a world of trouble, as one of her coven turns to her for help – and ends up being murdered, with her own cake knife, no less.

Because Harriet’s laziness got their person in trouble – and because the three cats love their person, despite her flaws – the three cats must do what they can to help Becca in her quest to find the killer, and to keep her from becoming a victim as well. The situation is complicated, however, by their distinct personalities. Harriet means well, but the fluffy marmalade is most concerned with her own comfort. Laurel, whose sleek build and café au lait coloring reveals the Siamese in her background, is more concerned with Becca’s love life, especially when a handsome warlock takes an interest. Therefore, it falls to Clara, the youngest of the bunch, to use her feline wiles to aid Becca and to keep her safe.

Sound like a cat you know? Me too. Only when I first drafted A Spell of Murder, I was owned by my late and wonderful Musetta, a tuxedo cat who appeared (thinly disguised as Esmé) in such Dulcie Schwartz mysteries as Into the Grey. When she passed last September, I needed some time to mourn. Although I suspected another cat would come to fill my life, I wasn’t there yet. 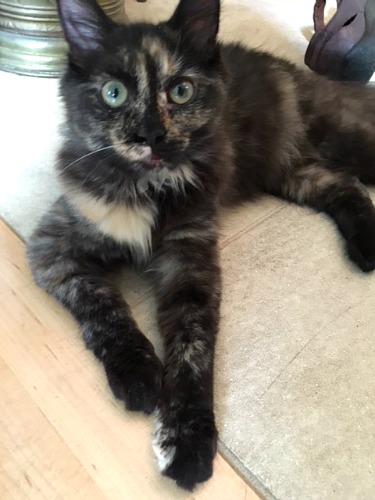 I confess, I was tempted by torties. I’d read about them and heard from Ingrid about their forceful little personalities and all their fun and witty traits. And in an early draft of this book, the heroine cat was briefly a tortie. But then I thought of a youngest sister, who is teased by her siblings, and Clara “the clown,” as her littermates call her, was born. If only my real-life felines came so easily. But I believe in adopting (and being adopted by) rescues, as I believe in fate. And the time wasn’t yet right.

Therefore, I spent last winter working on the book, going through several revisions before we sent it out, finding a home for it with a relatively new publisher, Polis. And then, just when the loneliness was growing unbearable, that little face appeared on Petfinder, and I learned Thisbe was going to be brought up from West Virginia along with another eleven kittens. By the time Jon and I went off to meet the tiny two-pound creature who would fill the Musetta-sized hole in our hearts, the book was done.

How can I make amends? I’m not sure I can. By the time the Publishers Weekly review arrived, all I could think of was what our pet sitter laughingly calls Thisbe’s “resting bitch face,” the marking that looks like an eyebrow arched in skeptical scorn. “Delightful,” the review said. “You don’t have to be a cat lover to appreciate this paranormal cozy’s witty observations, entertaining dialogue, and astute characterizations.”

Three cats seem destined for fame. None of them a tortie. 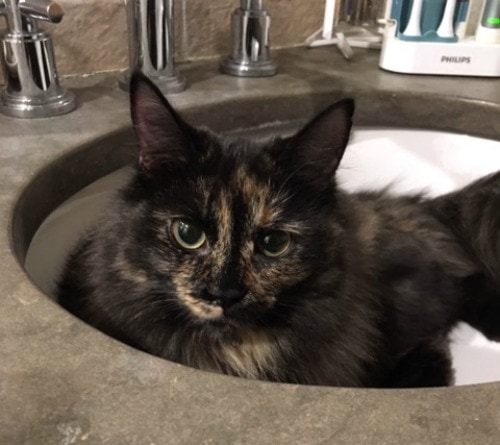 Can I ever make it up to Thisbe?

All I know is I’m going to try. It may take extra treats or pets. More time with the catnip mouse, or maybe a new character somewhere down the line. One thing I’ve learned about torties, though, is that they are more than their beautiful, unusual markings. And in addition to being a brilliant little tortie, Thisbe is also a sweet puffball – arched eyebrow or no. She may still resent my mistakes. But she is a forgiving creature, rather like Clara. And I believe – I hope – she’s still ready to watch out for me.

Clea Simon is the author of more than two dozen mysteries, most of which feature cats. She lives in Massachusetts with her husband, Jon, and Thisbe. She can be reached at https://www.cleasimon.com or on Twitter at @Clea_Simon

Coming this Friday: My review of A Spell of Murder

6 Comments on Discovering Tortitude, or, What Happens When a Writer Doesn’t Feature Her Tortie in Her New Book