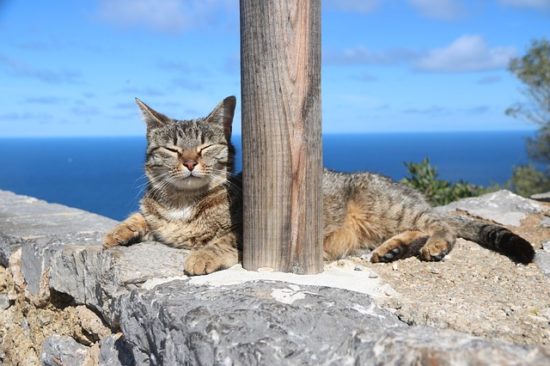 If you haven’t had a chance to get away this summer, why not plan a vacation that involves cat? From large sanctuaries to ancient temples, islands, and museum exhibitions devoted to cats, there are a lot of exciting locations around the world with cats as the focal point. Bustle has rounded up nine of these destinations for you. Time dream and plan!

If you missed any of the stories featured on the Conscious Cat this week, here’s a recap: on Monday, we told you about an exciting project that identified 22 new microorganisms with the help of poop from Lil BUB and 500 other cats, on Tuesday, we featured the new Go Bag from Sleepypod, on Wednesday, we addressed the difficult topic of dealing with feelings of guilt after euthanasia, and we informed you about an expanded recall of Radcat cat food, and on Friday, we reviewed Writers and Their Cats. And don’t forget to enter our giveaway for a Gone Fishin’ Cat Tent from Triple T Studios.

I can’t stop watching today’s video – it just cracks me up. I knew there was a good reason for Google Earth!