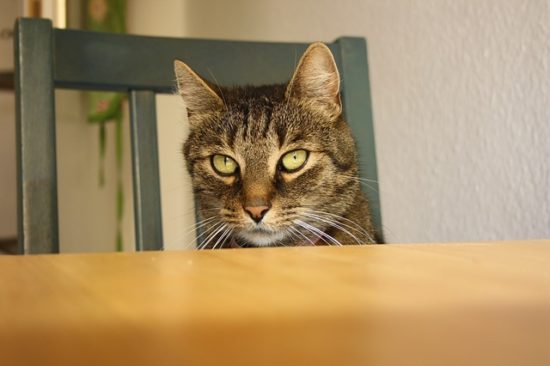 Most cats are picky eaters, and as such, less likely to be interested in some human foods than dogs, but because a cat’s digestive system is different from a human’s, some human foods can be highly toxic and even deadly to cats.

The following seven foods should never be given to cats. If your cat accidentally ingests any of these foods, emergency veterinary treatment may be necessary and an immediate visit to the veterinarian is essential.

All members of the onion family (shallots, onions, garlic, scallions, etc.) contain a compound that can damage cats’ red blood cells if eaten in sufficient quantities. Some of these are more toxic than others, and cooking does not destroy the toxin. While most cats probably wouldn’t eat raw onions or garlic, even products that contain small traces can be dangerous. A particular caution applies to baby food, which is often used to entice sick cats to eat: some brands contain onion powder to add flavoring. Read labels carefully before feeding.

Alcohol can be extremely dangerous for cats, leading to intoxication, coma and even death. Due to their small size, cats are far more sensitive to the effects of alcohol than humans. Cats are often attracted to mixed drinks containing cream or milk, such as eggnog.

Even though cats don’t have a sweet tooth, some cats will eat chocolate as part of nibbling on a cookie, candy or other baked treats. Chocolate contains caffeine and theobromine. The darker the chocolate, the higher the theobromine levels.

Some molds can produce multiple toxins that can cause vomiting, diarrhea and neurological symptoms.

Eating raw fish can result in a thiamine deficiency, which can lead to of appetite, seizures, and in severe cases, death.

Dough made with live yeast can be extremely dangerous for cats. The stomach provides an ideal environment for yeast to multiply. This will lead to the dough expanding in the stomach, which can be severe enough to cut off blood flow to the stomach wall and affect breathing. It can also cause the stomach to rupture. As yeast metabolizes the sugar in the dough, alcohol is produced, which can lead to alcohol poisoning.

Gnawing on Raw bones can be a great way for kitty to keep her teeth clean, but never give cooked bones to your cat. Cooked bones can splinter and cause intestinal perforations.

21 Comments on 7 Foods You Should Never Feed Your Cat