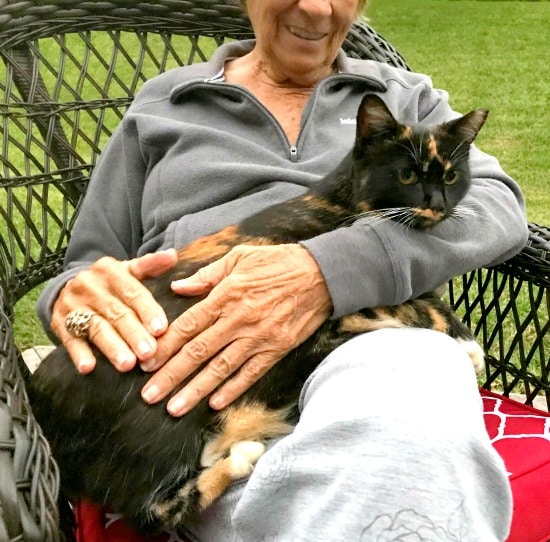 Last summer, my friend Bernadette lost her beloved cat Diz only three days before his 18th birthday. A few days after Diz passed away, a little tortoiseshell cat started showing up outside Bernadette’s home. We joked that Diz must have sent her.

Soon thereafter, Bernadette found out that a man in the neighborhood had called Animal Control to trap the little tortie. Bernadette spoke to the Animal Control officer and learned that her town runs a very successful TNR (Trap Neuter Release) program. Healthy cats are never euthanized. The little tortie had been spayed and then placed with a feral colony across the street from Bernadette’s home by the officer who runs the TNR program.

This little tortie, however, apparently decided that colony life did not suit her, so she crossed the road in search of a better place to call home. Bernadette had been feeding her and petting her, so she assured the officer that she would care for this little cat even if she remained an outdoor cat. This was fine with the officer.

Bernadette named her Chloe, fed her regularly, and slowly worked with her to build trust. She took Chloe to the vet for deworming and flea control. The vet guessed that Chloe was 6 or 7 years old and that at some point, she had likely been someone’s pet. 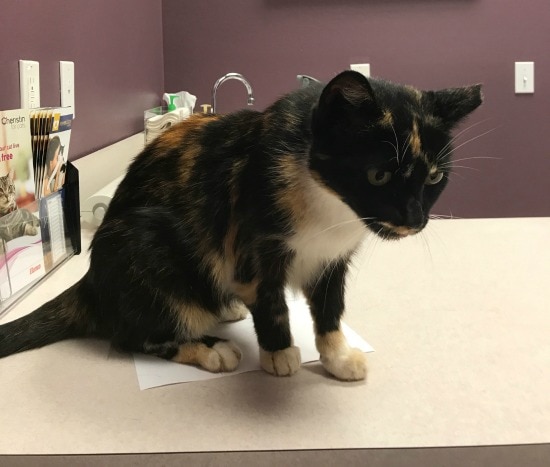 Chloe, however, showed no interest at that point in being a house cat. “The night I finally got her in, she practically killed herself trying to get out so I just let her go,” said Bernadette. “I have a little cat house for her in my entryway, and she spent lots of time there, but there’s no use trying to make her something she is not.” Bernadette would pet her over breakfast and dinner, and she would leave the garage door up in bad storms in case she wanted to come in. “She is who she is,” said Bernadette. 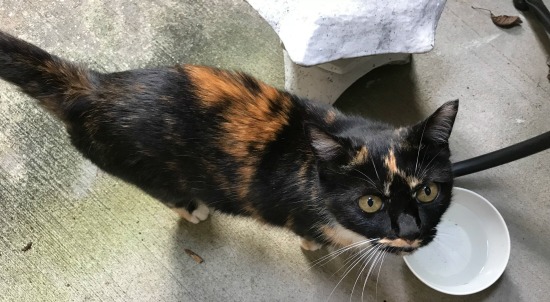 After about two weeks, little Chloe began visiting and “hanging out” on the screened in porch of Sue, the elderly lady next door. Sue had not been feeling well, had some trouble getting around, and over the past year or so had been somewhat withdrawn.

Chloe seemed able to pull Sue out of her “funk” and give her a point of focus. She would come inside Sue’s house for brief periods, but insisted on spending nights outside. Sue started feeding Chloe one meal a day, and slowly, Chloe started to trust her. She began jumping in Sue’s lap and purring and enjoying the attention.

Fast-forward a month to Hurricane Irma. Bernadette chose to evacuate but Sue did not. She said that she had survived many a hurricane in her 80+ years, and was not being intimidated by Irma. So, throughout the hurricane, even with no power, Sue cared for Chloe. 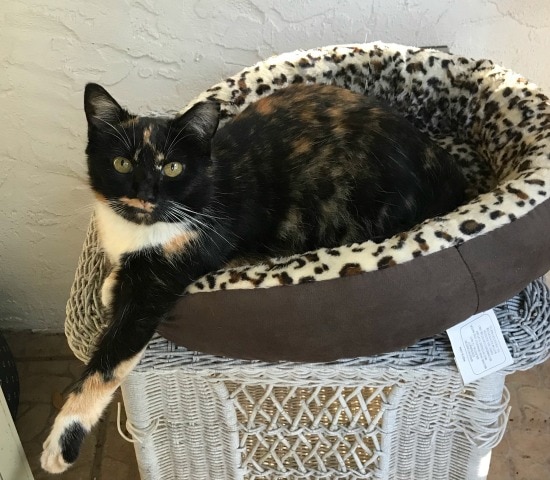 In the weeks after the storm, Chloe started staying inside at night at Sue’s house. She began sleeping in Sue’s bed at  night. She ate all her meals at Sue’s, and she started using a litter box. Chloe still ventures out during the day, but never leaves the immediate area of Sue’s or Bernadette’s homes. She comes home at dusk when Sue calls her.

Sue and Chloe have formed a “real bond,” as Sue put it. “It’s hard to tell who has benefited the most from this pairing,” said Bernadette. “Sue is feeling better, is more active and engaged, and laughs joyously with her beloved little cat. It brings joy to my heart.”

And in addition to becoming Sue’s new best friend, Chloe inspired Bernadette to participate in her local community cat program. She now feeds the colony of community cats Chloe was part of until she decided to cross the street and adopt her new senior human. “She is a smart little cookie with tons of tortitude,” said Bernadette.

15 Comments on Who Rescued Whom? Tortie Adopts Senior Woman