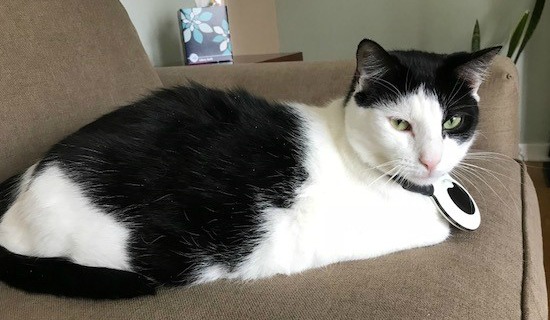 Shade is an almost 2-yearold Domestic Shorthair who shares his home with Stephanie, her husband Aaron and cats Ripley and Lucy in Camp Hill, PA. Shade was rescued from a feral cat colony as a kitten, and Stephanie adopted him when he was 4 months old.

Shade was a very quiet cat, and he had bad breath. Stephanie tried brushing his teeth in hopes it would help. His breath smelled better for a week or two, but the effect didn’t last. He also didn’t take to brushing very well. She tried dental treats, but he didn’t eat them. Shade also got a prebiotic powder to help with some intestinal issues.

When Shade showed symptoms of what appeared to be an upper respiratory infection, Stephanie took him to the vet, who noticed that his gums were very inflamed. Stephanie also mentioned Shade’s GI issues. (Studies on humans have shown a possible connection between gastrointestinal disease and oral disease.) The vet diagnosed Shade with stomatitis earlier this year. Shade was given antibiotics and steroid injections. “We were told that this was a lifelong illness and that it would flare up occasionally if not managed well,” said Stephanie. “The vet told us that we would be back if we didn’t do something else.” 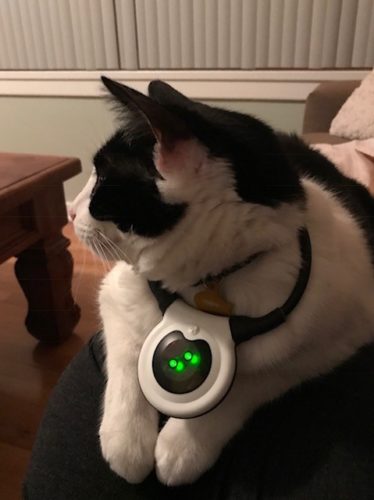 Using the Assisi Loop for Shade

Stephanie started Assisi Loop in March of 2018. “When we got Shade’s initial diagnosis, our vet recommended laser therapy, and also showed us the Loop,” said Stephanie. “We went home, did some research, and it seemed like a no-brainer to us.” They purchased a Loop shortly afterwards.

Stephanie wasn’t sure how well Shade would take to having the Loop used on her. “He is a pretty shy cat and scares easily,” said Stephanie. She needn’t have worried. “I couldn’t believe it!” she said. “He fell asleep with the loop around his neck the first time we put it on him.” Now, they usually put it on when he is sleeping or laying down, and he goes right back to sleep.

When they first got the Loop, they used it daily for a week. Now they only use it once a week. Sometimes, if they notice Shade having bad breath again, they increase to twice a week. 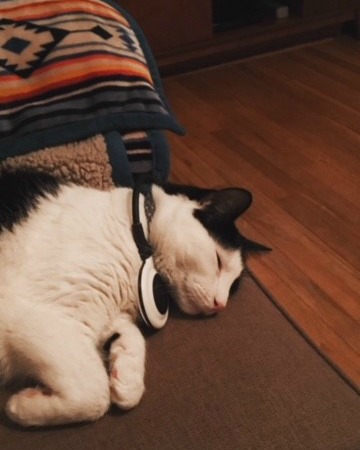 The improvements resulting from using the Loop have been nothing short of remarkable.

Treatment of stomatitis can be very frustrating. The goal is to control the inflammatory response. Typically, a cat will need to have a thorough cleaning of teeth to remove all plaque and tartar accumulation both above and below the gum line. This can be accomplished only under anesthesia. Cats may be given antibiotics and anti-inflammatory steroids; however, as Stephanie noted above, they usually only offer short term relief. Eventually, most cats will require extraction of all of their teeth.  Shade never had any dental work done.

“His entire demeanor has changed,” said Stephanie. “He has become more friendly and social. He rarely meowed or cried for attention and now he is constantly meowing at us to feed or pet him.” His GI issues have virtually disappeared, his gums aren’t as inflamed and his breath barely smells.

Shade is not receiving any other treatment.

1 Comment on How the Assisi Loop Helps Shade With Stomatitis