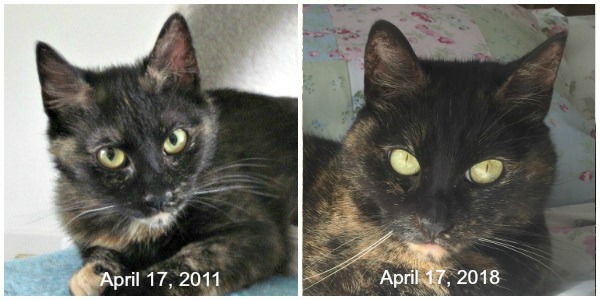 Hi everyone, it’s Ruby! Today is a very important day! It’s my 7th adoption anniversary! Seven years ago today, Mom brought me home to live with her and Allegra. What a happy girl I was that day! And every day since then!

Before Mom adopted me, my name was Cinnamon. Mom liked the name, but she said it wasn’t special enough for me, so she named me after a gem stone! Because I’m so precious!

Allegra: Precious is one way to describe you, Ruby…

Ingrid: I know it’s hard to tell in photos, but Ruby only weighs seven pounds (Allegra is slightly bigger at 8 pounds.) Ruby not only still looks like a kitten to me, with the exception of maybe sleeping a little more than she used to, she still acts like a kitten. It’s hard to believe that she will be eight in September.

Ruby: Mom, Allegra, come on! We need to celebrate me! Where’s my tuna cake?