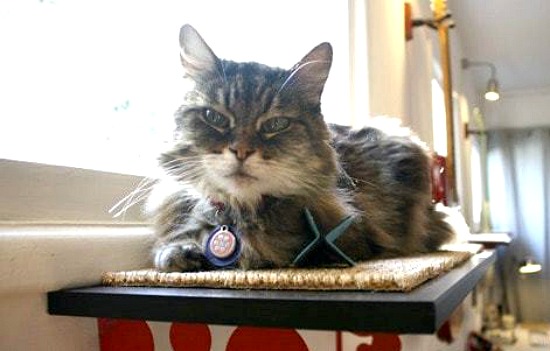 “For almost half my life, we have been a team,” wrote Jackson on his Facebook page. “She has been with me literally from the beginning of my cat journey; it can even be said that she was the beginning.”

In a 2012 interview with Jackson, he told me about how this beautiful tabby girl came into his life. Jackson had just started working at the Humane Society of Boulder Valley. He had recently lost his beloved boy Grolsch, who was rescued from a barn in Iowa in the middle of a blizzard, to FIP. One day, someone left a box with two kittens outside the shelter’s door. One of the kittens looked just like Grolsch.

“No way,” Jackson told me during that interview. “I didn’t want to adopt a kitten. That’s just not a cool thing to do when you work at a shelter, and there are all these older cats looking for homes.” But Velouria reminded him so much of Grolsch that he realized that resistance was futile. When he adopted her, he thought she was a kitten, but she was actually somewhere between one and three years old. She was a tiny cat all her life, weighing in at barely six pounds.

“The first time I touched this cat, the softness of her coat had me singing her name, Velouria, from one of my favorite bands, The Pixies,” wrote Jackson on his tribute to Velouria on Facebook.

During that same 2012 interview, I asked Jackson to tell me one favorite thing about each of his fur kids. This is what he said about Velouria:  “Her resilience. She’s shown me how to teach others that a cat can change and go from victim to being an amazing, confident cat.”

Velouria will live on in Jackson’s work, and, in light of the above quote, it seems more fitting than ever that she was chosen to be on the cover of Jackson’s newest book, Total Cat Mojo. 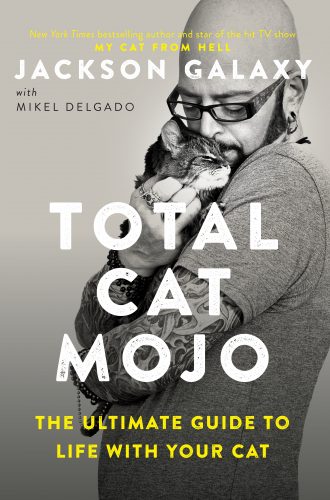 My heart goes out to Jackson. It’s always hard to lose a cat, but losing a “soul cat” like Velouria is devastating. When a cat shared your life for as long as Velouria was a part of Jackson’s, it takes time to find one’s bearings again. And while 25 years may seem like a long life for a cat, we all know that no amount of time is ever long enough for that kind of love.

34 Comments on A Tribute to Velouria