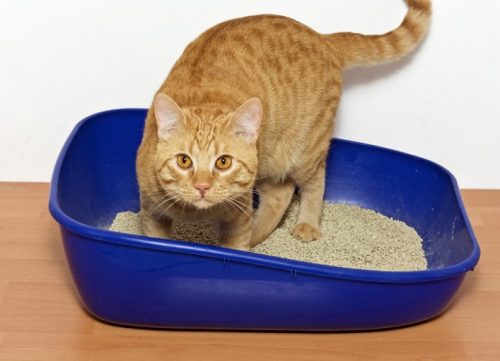 Inappropriate elimination (urinating outside the litter box) is one of the most commonly reported problems in cats. Some of these cats have issues with some aspect of their litter box, others have a medical condition that may make urinating painful, and some are urine marking, a behavior that is also known as spraying.

The difference between spraying and urinating

Cat guardians often confuse urinating and spraying. Urine spraying is a territorial behavior. Cats stand upright and deposit a small amount of urine on vertical surfaces. Cats who are urinating usually squat and deposit larger amounts on horizontal surfaces. Even though both male and female cats spray, the behavior is mostly seen in unneutered male cats, and occurs more often in multicat households, although even a single cat may spray when he sees a cat outside the window.

If you are not sure whether your cat is spraying or urinating, have him examined by your veterinarian. Inappropriate urination can be an indicator of a serious health problem.

Cats spray or urine mark as a way to communicate with each other. Cats spray to mark their territory, or when they feel anxious or threatened. Spraying behavior can be triggered by changes in the cat’s environment, such as the addition of a new family member, moving to a new home, or even rearranging your furniture. Spraying can also be caused by the presence of stray cats in your yard.

How to stop spraying

If you are sure that your cat is spraying, there are several ways to address the behavior.

Neuter or spay your cat. The decrease in sex hormones will most likely decrease or stop spraying.

Determine what is triggering the behavior. If stray cats in the yard are causing the spraying, block visual access to windows temporarily. Use humane deterrents to discourage stray cats from visiting your yard. If the behavior is triggered by conflict in a multicat household, such as bullying or fighting, you may need to engage the services of a feline behaviorist to improve the relationship between your cats and reduce stress in the household.

Never punish your cat. Punishment is ineffective and may aggravate the behavior.

Increase the number of litter boxes

Put multiple litter boxes in several locations throughout your home. The rule of thumb is one box per cat plus one. Make sure litter boxes are in a quiet location. Avoid covered boxes, and stick with unscented litter.

If your cat continues to mark despite all of these changes, your best bet will be to work with a feline behaviorist or your veterinarian.

11 Comments on Why Is My Cat Spraying and How Can I Stop It?